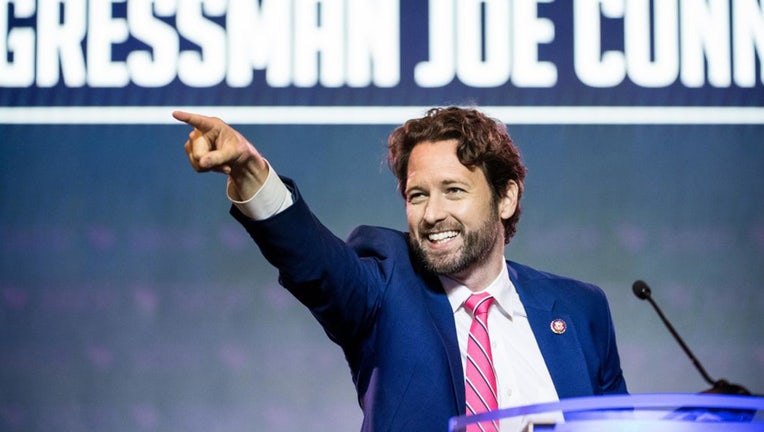 CHARLESTON, S.C. - Democratic gubernatorial nominee Joe Cunningham is proposing an age limit for South Carolina politicians — a cap that would cut off the 75-year-old incumbent Gov. Henry McMaster — and making a veiled argument that even fellow Democrats like President Joe Biden are staying "in office way past their prime."

"Our country and our state are being run by a geriatric oligarchy, people who stay in office way past their prime," Cunningham says in a campaign video, provided Wednesday to The Associated Press ahead of its public release.

"Some of these folks have been clinging onto power for 30, 40, even 50 years," Cunningham says. "The folks who are making a career out of politics are making a mess of our country."

Cunningham proposes instituting a 72-year-old age limit for South Carolina politicians, a retirement bar already in effect for the state's judges, and one that would take a constitutional amendment, approved by voters, to implement. South Carolina currently requires judges to retire officially at age 72, although jurists are allowed to stay on the bench in a fill-in capacity beyond that age limit.

Cunningham ends the two-minute video by making a bipartisan appeal for support from those who may have previously voted for Biden, former President Donald Trump, or McMaster "sometime in the last 40 years."

Cunningham, who recently turned 40, has frequently jabbed at McMaster's age, arguing that the Republican — who has served in a variety of public roles including lieutenant governor, U.S. attorney and South Carolina attorney general, for the majority of the past four decades — has "been in politics longer than I've been alive."

But Cunningham's campaign wouldn't answer questions Wednesday about whether the Democrat would argue that Biden — who has supported Cunningham since his 2018 run for Congress — is too old to serve.

When he took office last year at age 78, Biden was sworn in as the oldest president in the nation’s history, displacing Ronald Reagan, who left the White House in 1989 when he was 77 years and 349 days old. According to an AP-NORC survey conducted in January, more than three-quarters of Democrats said they felt confident that Biden "has the mental capability to serve effectively as president" or "is healthy enough to serve effectively as president." However, 8 in 10 Republicans do not have much or any confidence in either his physical health or mental capacity.

Republicans including U.S. Sen. Rick Scott of Florida, have called on Biden to resign, calling him "incoherent, incapacitated and confused." Former South Carolina Gov. Nikki Haley — who served the Trump administration as U.N. ambassador — proposed "some sort of cognitive test" for aging politicians, following a series of gaffes by Biden.

McMaster campaign manager Mark Knoop told the AP that South Carolina had benefited from "the leadership, hard work and ingenuity of people of all ages and backgrounds" and called Cunningham's notion "an insult to every senior in this state."

In the video, Cunningham also floats ending South Carolina's income tax — a practice already undertaken in a handful of other states — "to keep more money in your pocket."