Many European countries and Japan have announced travel restrictions for South Africa and neighboring countries. In a news conference Friday, Dr. Joe Phaahla said such reactions are "not an answer." 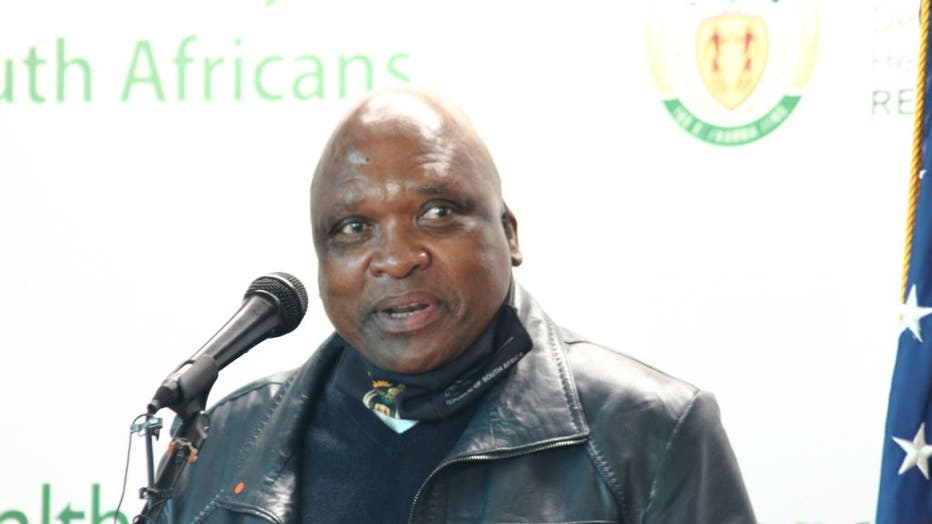 The Africa Centers for Disease Control and Prevention agreed and strongly discouraged any travel bans on countries that reported the new variant. It said past experience shows that such travel bans have "not yielded a meaningful outcome."

The World Health Organization called a special meeting Friday to look into the new variant, determining that it a "highly transmissible" strain of the coronavirus. The WHO's advisory panel named the new variant, previously identified as B.1.1.529, "omicron" under its Greek-letter system.

The announcement Friday from the United Nations health agency marks the first time in months that WHO has classified a COVID-19 variant as such. The delta variant, which has become the world’s most prevalent, is in the same category.

Scientists say this variant has a high number of mutations and has rapidly spread among young people in Gauteng, South Africa’s most populated province.

The novel coronavirus has evolved into many new variants over the last two years. Most of them, including ones with worrying mutations, often die out without becoming a major concern, the Associated Press reported.

Dr. Joe Phaahla, the Health Minister of South Africa, held a news briefing about the country's discovery of a new COVID-19 variant.

Scientists monitor for possible changes that could be more transmissible or deadly, but sorting out whether new variants will have a public health impact can take time. And Phaahla stressed not enough time has passed for countries to be placing travel restrictions on countries in southern Africa.

The variant appears more contagious, Phaahla admitted, but has not proven to be more deadly or lead to more severe illness. He also stressed there is currently no proof the variant will evade the protection offered by the vaccines.

Even so, the European Union has recommended its members halt travel to Southern Africa.

"All air travel to these countries should be suspended," European Commission President Ursula von der Leyen said. "And they should be suspended until we have a clear understanding about the danger posed by this new variant. And travelers returning from these regions should respect quarantine rules."

The European Commission (EC) on Nov. 26 proposed that member states suspend travel from southern Africa due to concerns over a new Covid-19 variant. (Credit: Ursula von der Leyen via Storyful)

Italy's health ministry announced measures to ban entry for anyone who has been in seven southern African nations — South Africa, Lesotho, Botswana, Zimbabwe, Mozambique, Namibia and Eswatini — in the past 14 days due. The Netherlands and the Czech Republic planned similar measures.

The Japanese government announced that Japanese nationals traveling from Eswatini, Zimbabwe, Namibia, Botswana, South Africa and Lesotho will have to quarantine at government-dedicated accommodations for 10 days and take COVID-19 tests on the third, sixth and tenth days. Japan has not yet opened up to foreign nationals who are visiting for tourist purposes.

Canada announced Friday it has banned foreign nationals who have traveled through southern Africa from entering the country.

Germany said its flight ban could be enacted as soon as Friday night. Flights returning from South Africa will only be able to transport German citizens home, and travelers will need to go into quarantine for 14 days whether they are vaccinated or not.

RELATED: Pfizer vaccine will be made at South African firm, a first for Africa

"It really doesn’t look scientific in any way. So that’s why we insist that kind of reaction is quite knee jerk and panic and actually almost wanting to put the blame on other countries rather than work together as guided by the World Health Organization," Phaahla said.

South Africa is a member of the British Commonwealth and maintains close ties with the United Kingdom. But Phaahla said the U.K. didn’t leave enough time to discuss the variant news before they banned flights from South Africa and its neighbors.

"The U.K. simply went ahead and imposed the restriction without even engaging us. So, that was basically a unilateral action without, before there could be any engagement."

The UK’s Health Secretary told the country’s parliament on Friday, Nov. 26 that a new COVID-19 variant was "of huge international concern" and that it was "highly likely" that it has spread to countries beyond where it has been detected. (Credit: Parliament TV via Storyful)

Sajid Javid, the UK’s Health Secretary, told Parliament on Friday that the new variant was "of huge international concern" and that it was "highly likely" that it has spread to countries beyond where it has been detected.

Indeed, it has been detected in places like Israel and Belgium.

"Early indications show that this (B.1.1.529) variant may be more transmissible than the Delta variant and current vaccines may be less effective against it," he added.

This year, South Africa has been quite critical of wealthy nations and vaccine manufacturers. Wealthy nations have the most access to COVID-19 vaccines, leaving the developing world fighting for scraps.

After spending much of the year asking that the vaccines or their formulas be shared with African countries, South African scientists have started the process of reverse-engineering the Moderna vaccine. If successful, they’ve pledged to share it with the rest of the world.

In the meantime, South Africa’s Department of Health is advising its citizens to continue to wear masks, practice social distancing, wash hands, improve ventilation and stay isolated if sick.

And Phaahla is advising other countries to wait for guidance from the World Health Organization, which has not signaled support for travel restrictions.