How are Social Security cost of living adjustments (COLA) calculated?

The adjustments are based on data relating to inflation.

WASHINGTON - The 70 million Americans who receive Social Security benefits could receive a notable adjustment for inflation on their monthly checks starting next year — which could be the largest increase in over 40 years.

Roughly 70 million people, including retirees, those who are disabled, widowers, and others, could see an 8.7% cost-of-living adjustment (COLA) in 2023, according to an estimate from the Senior Citizens League, a group that lobbies for older adults.

Such a boost would be the highest increase since 1981 when the inflation adjustment was 11.2%.

The estimate comes after the government on Tuesday released inflation figures for August, which declined for a second straight month amid sharply lower prices for gas and cheaper used cars. Consumer prices surged 8.3% in August compared with a year earlier, the government said. Though still painfully high, that was down from an 8.5% jump in July and a four-decade high of 9.1% in June.

A month ago, the Senior Citizens League had forecast a 9.6% boost, which was revised amid the slight cooling of inflation. There is only one month of consumer price data left to be shared for September, after which point the Social Security Administration is expected to announce the COLA on Oct. 13.

"A COLA of 8.7% is extremely rare and would be the highest ever received by most Social Security beneficiaries alive today," the Senior Citizens League said in a statement dated Sept. 13. "There were only three other times since the start of automatic adjustments that it was higher (1979-1981)." 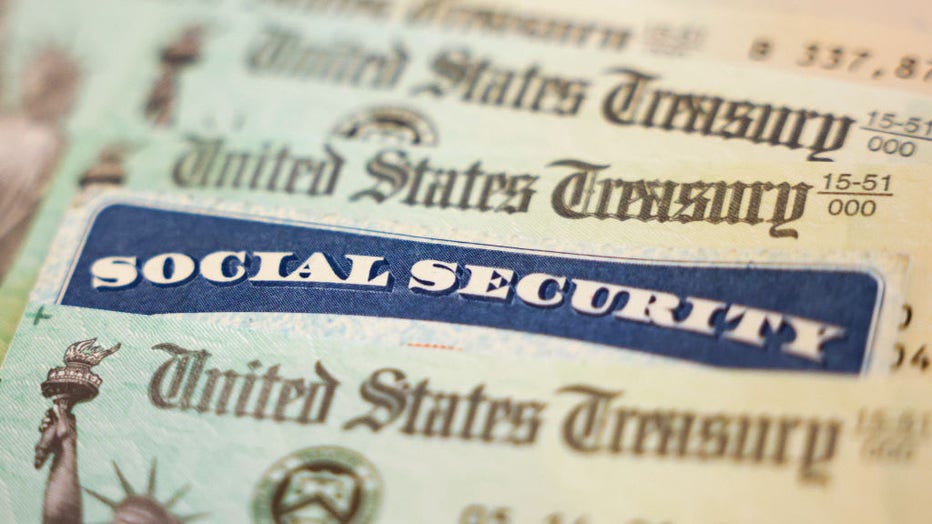 FILE - In this photo illustration, a Social Security card sits alongside checks from the U.S. Treasury on Oct. 14, 2021, in Washington, D.C. (Photo illustration by Kevin Dietsch/Getty Images)

These cost-of-living adjustments have been in place since 1975 as a way to adequately keep pace with inflation.

The COLAs are currently based on increases in the Consumer Price Index for Urban Wage Earners and Clerical Workers (CPI-W) from the third quarter of the previous year to the corresponding quarter of the current year, according to the Social Security Administration.

The Senior Citizens League estimated that the current COLA for August 2022 has fallen short, on average, by 48% — based on the current inflation figures through August. A $1,656 check is short about $43.80 per month, on average, and by a total of $417.60 year to date, it said.

"Without a COLA that adequately keeps pace with inflation, Social Security benefits purchase less and less over time, and that can create hardships especially as older Americans live longer lives in retirement," the group’s statement added.

Meanwhile, about 59% of people who answered a small survey by the Senior Citizens League said they believe they’ll face a higher tax liability in 2022 because of the 5.9% COLA received this year.

Experts have also predicted that the standard Medicare Part B premium, which covers certain doctor's services, outpatient care, medical supplies, and more, may not grow by much in 2023 — or perhaps even stay at the current $170.10 per month.

This is notable, as rising increases rising Medicare premiums can eat into COLA increases, according to the AARP.