Video from inside Dallas Love Field shows the moment a woman opened fire in the terminal and the quick-thinking officer who stopped her.

DALLAS - Video from inside Dallas Love Field shows the moment a woman opened fire in the terminal and the officer who stopped her.

Dallas Police Chief Eddie Garcia said investigators have learned that it was an Uber driver who dropped 37-year-old Portia Odufuwa at the airport.

She then changed in a bathroom and came out with a handgun in her hand. She yelled things about her marriage, incarceration and said she was going to blow the place up, police said.

Security video shows her firing three rounds into the ceiling before being shot in the leg by police.

RELATED: Dallas Love Field shooting suspect shot by police, no one else injured

Chief Garcia said Officer Ronald Cronin was nearby when it happened and engaged Odufuwa immediately. He says the officer gave her verbal commands to drop the weapon.

Instead, Garcia says she opened fire, shooting a couple of rounds into the air and then pointed the gun towards Cronin and an innocent bystander.

Dallas Police release video shows police confronting woman who opened fire inside of Dallas Love Field Airport on July 25, 2022. (Note: Portions of this video do not have any sound)

Odufuwa then fell to the ground. Moments later, other officers who were also working at the airport began to arrive to assist officer Cronin.

Video and audio were captured on Cronin’s body camera. Police cautiously approached Odufuwa as the gun she used was nearby.

Chief Garcia said the gun did not belong to her.

"It was not registered to her," he said. "Obviously, she got it from somebody else." 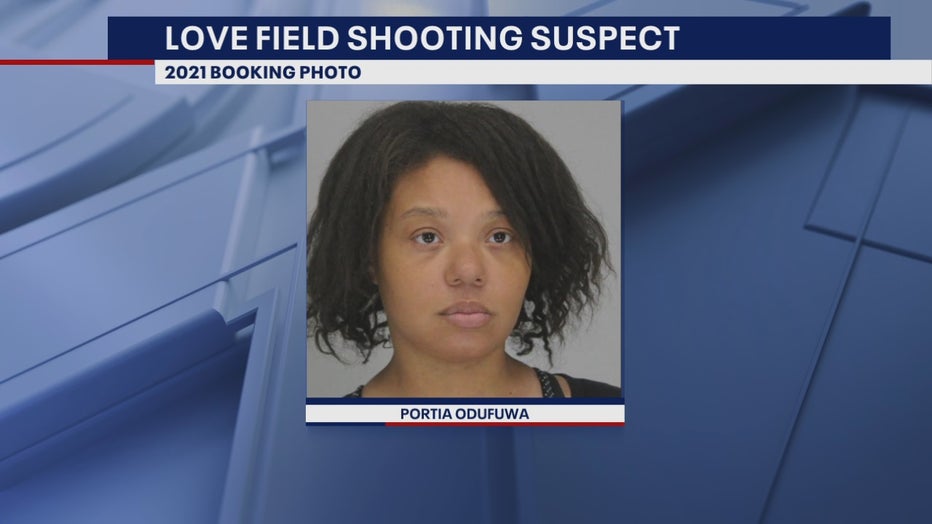 Police say Odufuwa has been prohibited from owning a firearm since 2018 because of a prior criminal history that includes arrests for bank robbery, arson and false reporting.

Online court records show some of the cases were dismissed, and Odufuwa was found incompetent to stand trial. She also has a history of mental health evaluations following arrests.

Police say in 2016 Odufuwa was denied the purchase of a firearm twice at a Balch Springs pawn shop due to an outstanding traffic warrant.

But what's crystal clear to Chief Garcia is that Officer Cronin is "a warrior."

"In situations like the one we had at Love Field yesterday, our men and women must also be warriors. That is what Officer Cronin was. He didn’t hesitate in engaging, managing to give commands to potential victims attempting to guide them to safety even after being involved in the most traumatic scenario of our beloved profession," he said. "I know his actions saved lives and prevented more injuries."

Odufuwa underwent surgery for her leg injury and has been charged with aggravated assault against a public servant. Other federal charges are possible.

Police are still working to determine where she got the handgun used in Monday’s shooting.