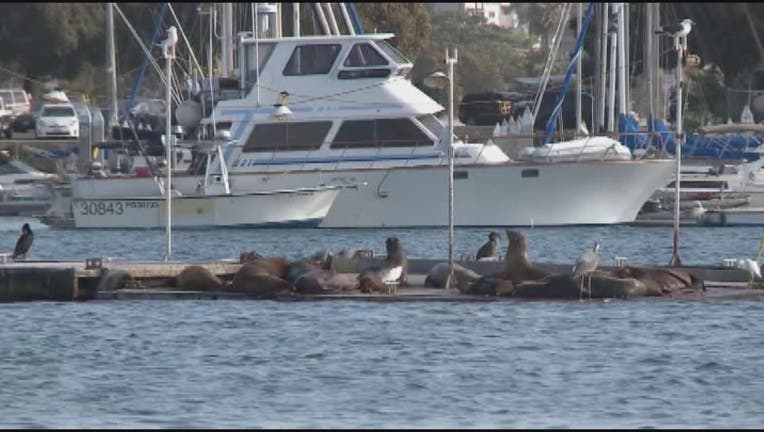 Blood stains on a boat deck are evidence of a fishing trip that took a bizarre turn Sunday afternoon.

Lifeguards say two buddies were on this boat in the Mission Bay Channel when the incident happened.

One of the men was handling a fish when a 300 pound sea lion launched a surprise attack.

"Apparently they were going to take a picture and were holding the fish up. There's no doubt the sea lion eyed that fish from the water and launch itself and grab the fish," said lt. john Sandmeyer of the San Diego Lifeguard

"He was estimated he was in the water for 15 to 20 seconds. At that point, the sea lion let go and he was able to jump back into his boat," Sandmeyer said. "He was in pretty good shape, no drowning potential, just a scary event."

The boaters returned to dock.

The 62-year old victim went to the hospital with non-serious lacerations and punctures.

"This is completely out of the norm - never heard of a seal attack like this before," said boater Erik Kopp.

Kopp and other boaters say while the attack is unusual, they've noticed sea lions around the marina becoming more aggressive.

"Normally they would just leave when you walked up to them. Now, they're actually turning and chasing you when you try to get on your boat," Kopp said.

Meanwhile, lifeguards say this attack is a safety reminder for others on these waters.

"Fish, bleeding fish, there are sea lions out there. They're going to be after the same thing fishermen are after," said Sandmeyer.