A group representing school board members around the country asked President Joe Biden on Thursday for federal assistance to investigate and stop threats made over policies including mask mandates, likening the vitriol to a form of domestic terrorism.

The request by the National School Boards Association demonstrates the level of unruliness that has engulfed local education meetings across the country during the pandemic, with board members regularly confronted and threatened by angry protesters.

School board members are largely unpaid volunteers, parents and former educators who step forward to shape school policy, choose a superintendent and review the budget, but they have been frightened at how their jobs have suddenly become a culture war battleground. The climate has led a growing number to resign or decide against seeking reelection.

"Whatever you feel about masks, it should not reach this level of rhetoric," NSBA Interim Executive Director Chip Slaven told The Associated Press by phone. 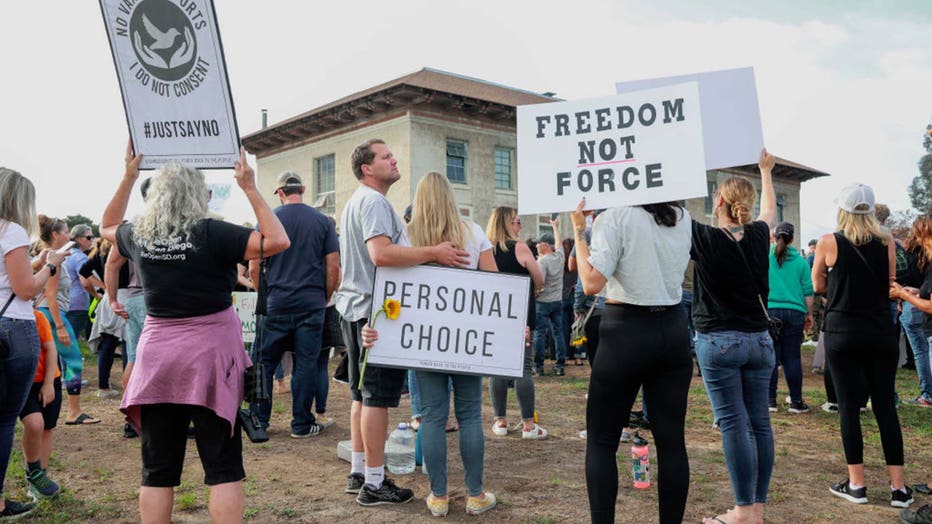 FILE - Anti-vaccine protesters stage a protest outside of the San Diego Unified School District office to protest a forced vaccination mandate for students on Sept. 28, 2021 in San Diego, Calif.

White House press secretary Jen Psaki said responsibility for protecting school boards falls largely to local law enforcement but "we’re continuing to explore if more can be done from across the administration."

"Obviously these threats to school board members is horrible. They’re doing their jobs," she said during a press briefing.

The association asked for the federal government to get involved to investigate cases where threats or violence could be handled as violations of federal laws protecting civil rights. It also asked for the Justice Department, FBI, Homeland Security and Secret Service to help monitor threat levels and assess risks to students, educators, board members and school buildings.

"As these acts of malice, violence, and threats against public school officials have increased, the classification of these heinous actions could be the equivalent to a form of domestic terrorism and hate crimes," the association wrote.

The association represents more than 90,000 school board members in 14,000 public school districts.

The letter documents more than 20 instances of threats, harassment, disruption, and acts of intimidation in California, Florida, Georgia, New Jersey, Ohio and other states. It cites the September arrest of an Illinois man for aggravated battery and disorderly conduct for allegedly striking a school official at a meeting. In Michigan, a meeting was disrupted when a man performed a Nazi salute to protest masking.

"We are coming after you," a letter mailed to an Ohio school board member said, according to the group. "You are forcing them to wear mask—for no reason in this world other than control. And for that you will pay dearly."

It called the member "a filthy traitor."

Last week, a crowd of up to 200 protesters who banged on doors and shouted at police shut down a school board meeting in Coeur d’Alene, Idaho, where members planned to consider a temporary COVID-19 mask mandate.

At a U.S. Senate committee hearing on Thursday, Education Secretary Miguel Cardona decried the hostility against school board members and praised their "unwavering support" to reopen schools safely. He said the lack of civility in some meetings is disappointing and, in some places, it has been "very dangerous."

He made the comments in response to questions from Sen. Mike Braun, R-Ind., a former school board member who said contentious meetings are a part of civic engagement.

The threats have gone beyond board meetings.

The father of an Arizona elementary school student was arrested after he and two other men brought zip ties to the campus, threatening to make a "citizen’s arrest" on the school principal over a COVID-19 quarantine. In California, a parent barged into his daughter’s elementary school and punched a teacher in the face over mask rule.

Associated Press writers Ricardo Alonso-Zaldivar and Aamer Madhani in Washington and Collin Binkley in Boston contributed to this report.