The Sept. 11 anniversary commemoration at ground zero has begun with a tolling bell and a moment of silence, exactly 20 years after the start of the deadliest terror attack on U.S. soil.

The body of a U.S. Marine killed in a suicide bombing in Afghanistan has returned home to Massachusetts on the 20th anniversary of the attacks that led to the war.

Sgt. Johanny Rosario Pichardo, 25, was among the U.S. service members and Afghans killed in the Aug. 26 bombing near the Kabul airport.

Then in her hometown of Lawrence, people lined the streets and waved flags at the vehicle procession of police, firefighters and others that accompanied her casket. A Marine honor guard carried the flag-draped casket into a funeral home. 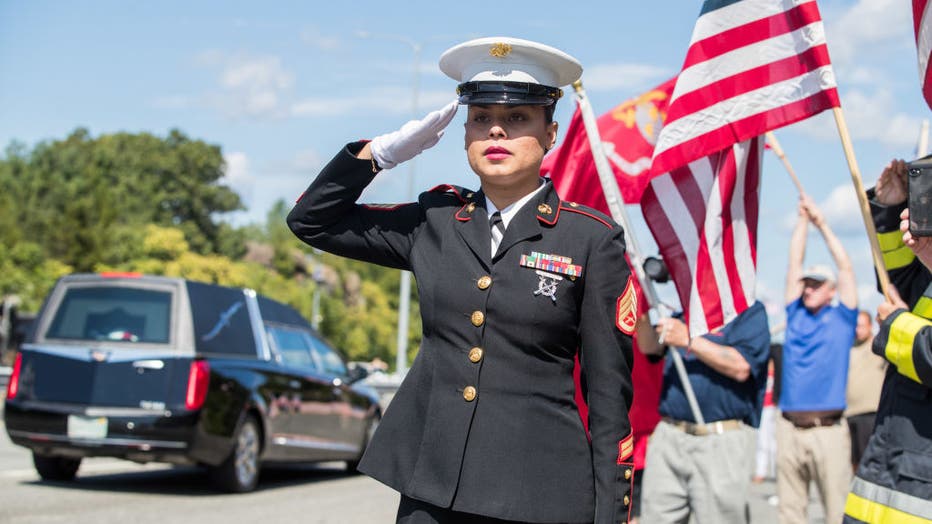 RELATED: From ground zero to Pentagon to Shanksville, US marks 20th anniversary of 9/11

"She’s coming home on the date, the 20th anniversary of the date, that created the war that cost her life," Francisco Urena, former state veterans commissioner, told The Boston Globe.

Rosario died in the Aug. 26 bombing at the Kabul airport, where people were being evacuated amid the Taliban takeover of Afghanistan. A dozen other U.S. service members and 169 Afghans were killed.

She and the other 12 service members who died during the attack have been awarded Purple Hearts.

Dozens attended a separate vigil in Rosario’s memory last weekend in Boston that was hosted by Massachusetts Fallen Heroes, an organization founded by veterans who served in Iraq and Afghanistan.

RELATED: Afghanistan and the Taliban: From 9/11 to today

A private funeral Mass will be held Monday. A public wake is planned for Tuesday at a stadium in Lawrence, with burial at Bellevue Cemetery.

Procession for U.S. Soldier killed in Afghanistan | LiveNOW from FOX

The body of 22 year old Marine Corps Cpl. Humberto Sanchez, who was killed in the suicide bombing in Kabul, nightstand, last month is returns home to Logansport, Indiana.