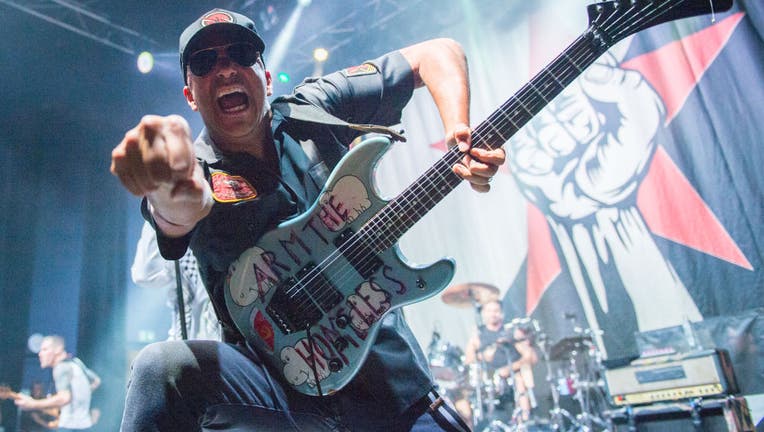 Tom Morello of Rage Against The Machine performs as part of Prophets Of Rage on stage at O2 Shepherd's Bush Empire on August 12, 2019 in London, England. (Photo by Ollie Millington/Redferns)

Tom Morello, lead guitarist of Los Angeles rock band Rage Against the Machine, was accidentally tackled by a security guard who was chasing a fan that rushed the stage during a Toronto concert Saturday night.

Morello and the band were playing their final song, "Killing in the Name," when a fan in a red shirt jumped onto the stage, according to video posted online.

In the video, a security guard can be seen chasing after the fan, but accidentally tackles Morello — who falls off the stage — as the fan jumps down and tries to escape back into the crowd. Other security guards then grab hold of the fan before he can escape.

The band stops the song when lead singer Zach de la Rocha, who was sitting in a chair after injuring his leg during a previous show, notices the mishap and yells, "Hold up! Hold up!"

Morello quickly gets back up and pumps his arms in the air toward the crowd, who let out a raucous cheer for the guitarist, according to video footage.

It didn’t appear as though Morello was injured as the band restarted the song to close out the show.

Earlier this month, the band returned to the stage for the first time in 11 years and railed against the Supreme Court's decision to overturn Roe v. Wade.

During the show on July 9 at Alpine Valley Music Theatre in Wisconsin, the band broadcasted several captions on a screen on stage blasting the high court with one caption going as far as to suggest eliminating the court, the Milwaukee Journal Sentinel reported at the time.