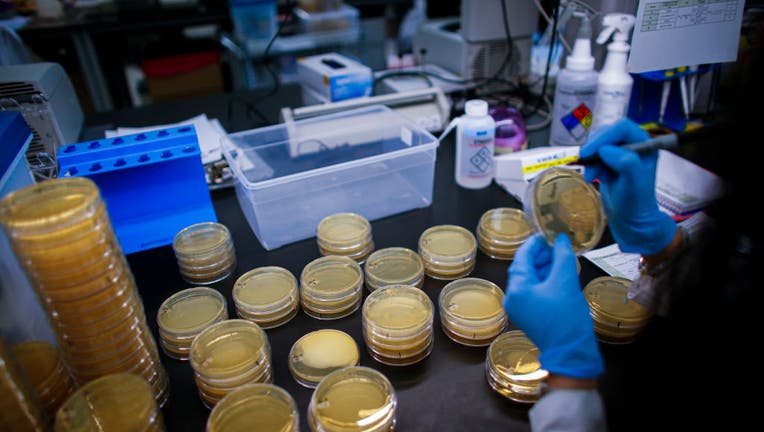 A researcher works in a lab that is developing testing for the COVID-19 coronavirus at Hackensack Meridian Health Center for Discovery and Innovation on Feb. 28, 2020 in Nutley, New Jersey. (Photo by Kena Betancur/Getty Images)

WASHINGTON - Lawmakers on Tuesday expressed skepticism that U.S. health officials will be able to meet their goal of significantly ramping up testing for the new coronavirus.

Health officials have said U.S. labs should have the capacity to run as many as 1 million tests by the end of the week. But such testing has faced delays and missteps, and “I'm hearing from health professionals that's unrealistic,” said U.S. Sen Patty Murray, during a Senate hearing.

The head of the U.S. Food and Drug Administration, Dr. Stephen Hahn, said the FDA has been working with a private company to get as many as 2,500 test kits out to labs by the end of the week. Each kit should be able to allow a lab to run about 500 tests, he said.

“I am optimistic but I want to remain humble,” said Dr. Anne Schuchat of the Centers for Disease Control and Prevention.

Murray said testing has become a huge concern in her home state of Washington, where the virus has been spreading and at least nine people have died.

"I am hearing from people who are sick, who want to get tested, and don't know where to go,"' said Murray, a Democrat, during the hearing of the Senate Committee on Health, Education, Labor and Pensions.

Nancy Foster, of the American Hospital Association, said the group recommends that people who have possible symptoms of the virus contact their doctor or hospital before visiting a clinic. That will enable staff to meet the person outside and take steps to prevent exposure to other patients.

The virus has infected more than 90,000 people worldwide and killed more than 3,100. But the U.S. has trailed other countries in rolling out tests, because of problems with its test kits and because the CDC initially limited the number of eligible people.

RELATED: US testing capacity for coronavirus delayed amid ‘inconclusive’ results from kits distributed by CDC

In January, the CDC said it had developed a test kit and sent it to state and big city public health labs, so they could broaden testing to more people. But most of the kits proved to be faulty, providing inconclusive results to test samples that should have tested positive.

The problem was blamed on one of three chemical reagents used in the testing, and the CDC moved to fix the problem.

In a call with reporters on Tuesday, one CDC official acknowledged contamination was one possible explanation, but not the only one.

Dr. Nancy Messonnier refused to say more, except that the agency was ensuring test kits being sent out now “meet the high quality standards that we and FDA hold ourselves to.”

Whatever the reason for the earlier problem, only about a half dozen state and local public health labs had fully functional kits as of early last week. Late last week, the CDC said labs could go ahead and do testing with just two of the reagents. As of Tuesday, 54 state and local labs were able to do tests, according to the Association of Public Health Laboratories.

That will be a small part of the total testing that should be coming online, officials said.

The CDC only recently broadened testing criteria. It initially had advised testing people who had traveled to China and had fever and certain other symptoms, or their close contacts. It now says testing is appropriate if such symptoms exist and other respiratory illnesses have been ruled out, even if no source of possible exposure has been identified.

The count in the U.S. has begun to grow rapidly in the last several days, after more labs started testing and the eligibility grew. More than 100 U.S. cases have been reported.

Meanwhile, acting Department of Homeland Security Secretary Chad Wolf told lawmakers Tuesday that the agency closed a facility in King County, Washington, because an employee became ill after visiting a family member at a Kirkland nursing home where five of the seven U.S. deaths occurred.

He did not specify the type of facility or say how many employees work there, and the agency did not immediately provide further details. The employees were told to work from home for 14 days, and all were told to “self-quarantine” during that time.

The new virus is a member of the coronavirus family that can cause colds or more serious illnesses such as SARS and MERS.

The virus can cause fever, coughing, wheezing and pneumonia. Health officials think it spreads mainly from droplets when an infected person coughs or sneezes, similar to how the flu spreads.

Officials are advising people to take steps to avoid infection with coronavirus or other respiratory infections like colds or the flu, including washing hands with soap and water and avoiding close contact with people who are sick.

Most people get only mild illnesses and many have recovered.