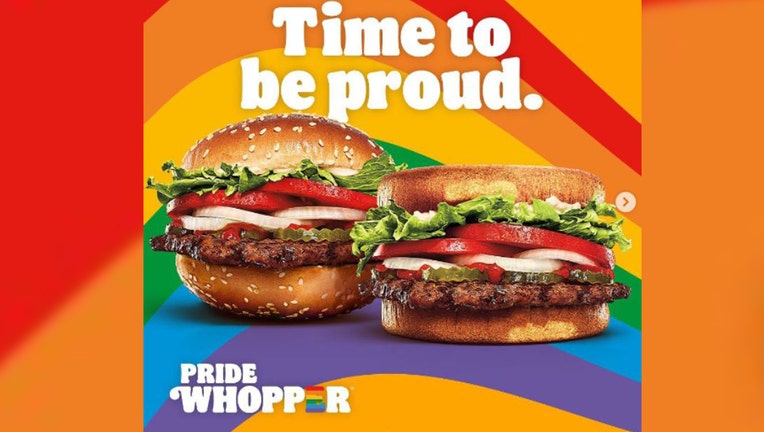 Businesses all over the world are celebrating Pride month, and Burger King Austria is joining in on the festivities.

The fast-food chain debuted its Pride Whopper, which is the same Whopper served with the same half of a bun on each side.

"The Equal Buns campaign was executed by our Burger King Austria team, to highlight equal rights and equal love — through a play on the traditional Whopper build — featuring two identical buns on the two options of the sandwich," a spokesperson for Burger King told FOX Television Stations. "Burger King Austria also serves as an Official Proud Partner and Sponsor of Vienna Pride 2022."

Last February, Nela Zisser posted a video of herself eating 10 Burger King Whopper hamburgers as part of her "Girls VS. Food" series.

The burger is available until June 20 in Austrian stores.

In June 2021, Burger King announced on Twitter that for the duration of Pride Month, the fast-food franchise would donate to the Human Rights Campaign for every one of Chick-fil-A's Ch’King sandwich that was sold.

The Human Rights Campaign "strives to end discrimination against LGBTQ people and realize a world that achieves fundamental fairness and equality for all," according to the campaign’s website.

Burger King also noted in the tweet that the offer still stands "even on Sundays," alluding to the fact that Chick-fil-A is known for being closed on Sundays so employees can "set aside one day to rest and worship if they choose," according to the Chick-fil-A website.

The Atlanta-based fast-food chicken restaurant has faced backlash in the past over its donations worth millions of dollars to groups that oppose same-sex marriage.

Catherine Park contributed to this story.