VIDEO: President Trump CDC visit back on after false coronavirus scare there

President Donald Trump's trip to the Centers for Disease Control, which was scuttled Friday because of unfounded fears that someone there had contracted the&nbsp;coronavirus, was back on, giving the president another chance to calm growing alarm about the spread of the virus in America.

WASHINGTON - President Donald Trump's trip to the Centers for Disease Control, which was scuttled Friday because of unfounded fears that someone there had contracted the coronavirus, was back on, giving the president another chance to calm growing alarm about the spread of the virus in America.

“Be calm. It will go away," Trump told reporters after signing a $8.3 billion coronavirus response funding bill at the White House.

Trump said the trip to the CDC had been canceled over concern about a possible infection there, but that the person tested negative. The White House now says the president will visit there on Friday. 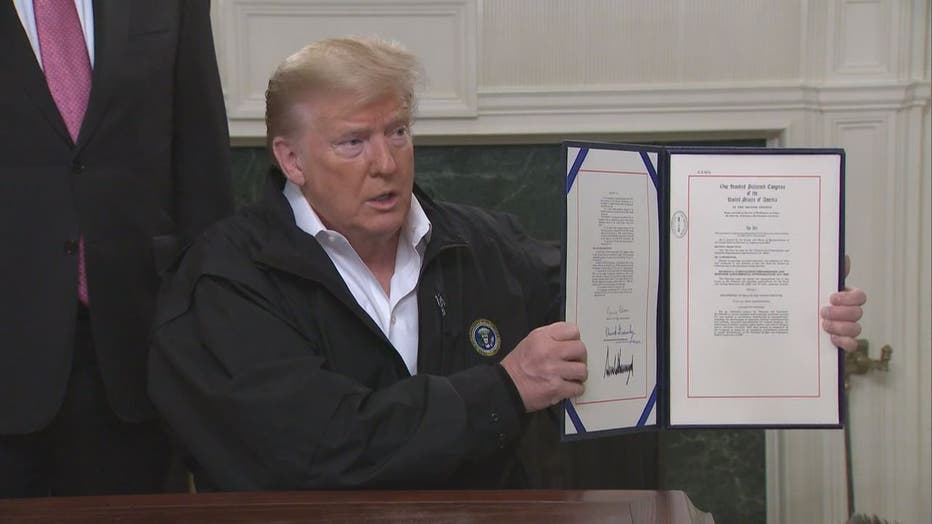 “We have very low numbers compared to major countries throughout the world. Our numbers are lower than just about anybody," Trump said about cases of the virus, which have rocked financial markets, interrupted travel and threatens to affect everyday life in the United States.

"It's an unforeseen problem," Trump said about the virus. “It came out of nowhere. We're taking care of it.”

So far, 14 people have died in the United States and Trump downplayed concern that the country was not ready to respond to an outbreak. On Thursday, the White House was told that there might be a person at the CDC with the virus, but Trump said the person tested negative and said he still wanted to visit.

Trump also said he talked on the phone with California Gov. Gavin Newsom about the 3,500 people stuck on a cruise ship anchored off the coast of California. He said the passengers were being tested for the virus.

The legislation Trump signed at the White House provides federal public health agencies with money for vaccines, tests and potential treatments and helps state and local governments prepare and respond to the threat.

The Senate passed the $8.3 billion measure Thursday to help tackle the outbreak in hopes of reassuring a fearful public and accelerating the government's response to the virus. The money will pay for a multifaceted attack on a virus that is spreading more widely every day, sending financial markets spiraling again Thursday, disrupting travel and potentially threatening the U.S. economy's decade-long expansion.

Trump left the White House to visit tornado damage in Tennessee. He was to spend the weekend at his resort in Palm Beach, Florida.