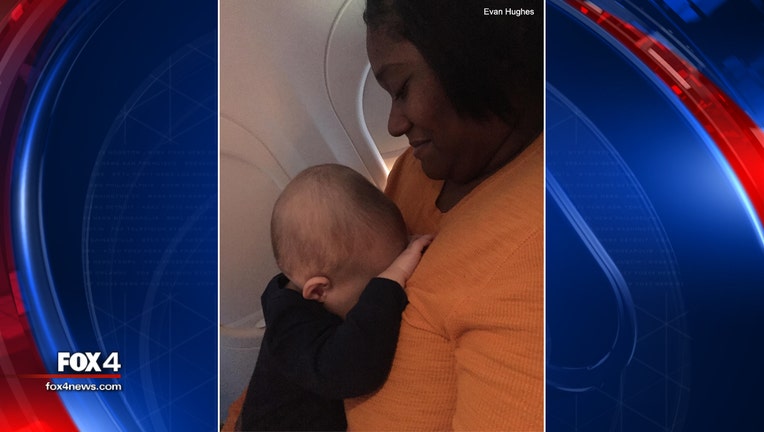 DALLAS - A Fort Worth father was having a really bad day recently until a kind stranger offered to lend a hand (and a boobie pillow).

Evan Hughes shared his story and a photo of the encounter on IMGUR. He said he and his significant other got separated at the airport in Chicago because of the weather and he ended up alone on a flight back to North Texas with his 8-month-old son.

Baby Ki did okay for a while, but then got restless and decided he no longer wanted to sit with his father. He kept trying to climb over to the woman sitting next to them so he could get to the window.

"After brief introductions and him fighting me trying to crawl over to her, she opens her arms and says 'Oh just give him to me!' He (and I, exhaustedly) willingly oblige to the stranger's request," he wrote.

Hughes was shocked by what his son did next. Within minutes he put his head down on the woman's chest and fell asleep.

"Power of the boobies," she joked.

As it turns out, the woman is daycare worker from DeSoto named India Massinburg. She offered to hold the baby for a while both he and his father napped.

"After multiple cancellations and layovers, I selfishly agreed to give her watch over my precious child so that I could catch a quick cat nap. The kindness of this stranger was truly refreshing on what was quickly becoming one of the worst days in a long time," Hughes said.

He said the story proves there's still hope for humanity.