Robinson Jr. has been released from the hospital after he was shot in Northwest Washington, D.C. Sunday during what police believe was an attempted robbery. He stopped by the Commanders training facility Tuesday afternoon.

On Monday, D.C. Police Chief Robert Contee addressed the shooting and said Robinson Jr. exited a location in the 1000 block of H Street around 6 p.m. Sunday when he was approached by two armed teens – believed to be between the ages of 15 and 17-years-old.

Chief Contee also described Robinson as fighting back during the encounter. The Chief of Police said the 23-year-old wrestled a gun away from one of the suspects before he was shot twice by the second suspect.

Robinson Jr. told police he was shot in the leg.

TMZSports.com posted video they say shows Robinson Jr. in the moments after he was shot. A witness described a tourniquet being applied to the 23-year-old Commander.

Both suspects fled the area in a vehicle Contee believes was stolen from Prince George’s County on August 26. That stolen car was recovered by police working with area partners.

A Glock was recovered from the scene, according to the police report.

The suspects were captured by a nearby surveillance camera. 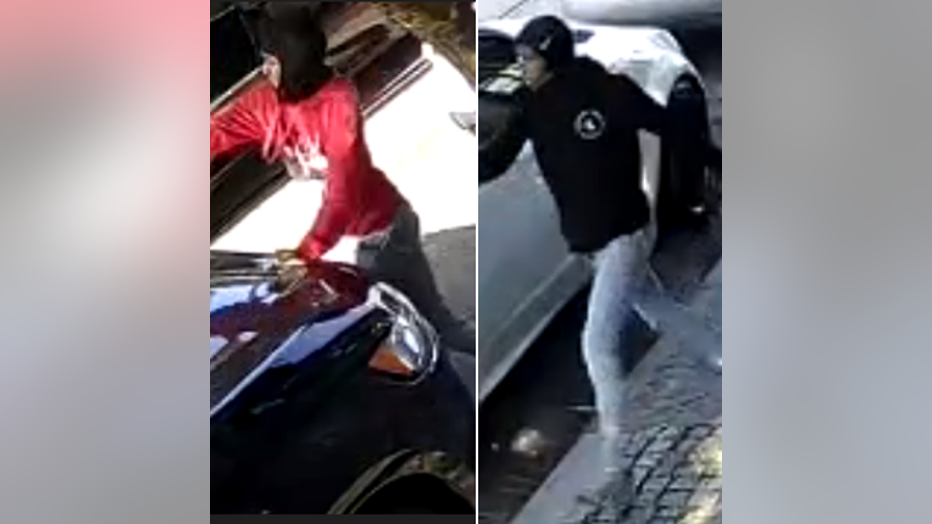 The Commanders posted an update from Robinson Jr. on Monday.

He took to Instagram posting what appeared to be a view from his Medstar Washington Hospital Center room. The picture shows his view of the Basilica of the National Shrine dome.

"Surgery went well! Thanks for the prayers! God is Great!" he wrote in the caption.

Washington Commanders Head Coach Ron Rivera did not give a timeline but expressed positivity and hope that it will only be a matter of time before Robinson Jr. is back on the field.

D.C. Mayor Muriel Bowser said she is confident that detectives will find the people responsible for the shooting. "Any person – regardless of their age – who uses a gun – needs clear and certain consequences," Bowser said on Monday.

"I think people should feel safe. But when you have these types of incidents that happen in our community – and certainly when these situations are reported – they make people feel less safe when you have someone who uses a firearm, in broad daylight, in any of our communities," Contee said.

"These things like this – when you talk about people using firearms in communities – that makes people feel unsafe. We want to be there to support community members – but also lock up bad guys and hold them accountable for their actions," he added.

The police chief also reported that homicides are down to 4% compared to last year  —  after the murder rate reached devastating highs earlier this year. Chief Contee said police would also discuss possibly moving around members who are working to cover certain popular areas of the District areas under "The Nightlife Task Force."

After Monday’s practice, some of Robinson Jr.'s Commanders teammates opened up about the shooting.

"I think it’s a wake-up call to everybody," said Commanders quarterback Carson Wentz. "You know there’s real life problems out there in this world but thankfully Brian’s doing well, I’m told, and I’m looking forward to seeing him."

"The first thing you’re just thinking is, ‘Is he okay?’ You know what I mean? Especially when you hear somebody get shot multiple times," Commanders wide receiver Terry McLaurin said."’B-Rob’ is someone whose come in here – and he’s fit in right away. His personality is infectious, the way he comes around here excited to come to work."

"It’ll just be a matter of time before he’s back out there  – no timeline but everything was very positive," head coach Ron Rivera said. Rivera also said he felt angry after he learned of the shooting.

"That this continues to be a nation-wide epidemic – you know gun violence, and I think you know, we really got to start getting to the point where we start talking about gun safety," Rivera said. "We can’t make this a partisan issue. This has to be something everybody has to work on together in our communities throughout the United States. And it can happen – just shows you –  it can happen anywhere and to anybody."

Washington Commanders rookie running back Brian Robinson Jr. was shot during an attempted robbery or carjacking, the team said Sunday.

Alabama Crimson Tide Head Coach Nick Saban also expressed his thoughts and prayers on Monday saying he reached out to his former player but did not hear back before a Monday afternoon news conference was held.

FOX 5 also heard frustrations from members of the H Street Northeast community. One young man who works near 11th and H Streets Northeast asked not to be identified but told FOX 5 in addition to the Sunday gun violence on H Street, he was also not that far away when five people were shot in the middle of the day on O St. NW last week.

"It’s hard to think that you’re safe," the young man said. "That would be my reaction to everything going on. And I grew up in D.C. and I know the area. I live right down the street … it’s definitely tough."

"It’s not on the mayor, it’s not on the police department. It’s on families, it’s on us. We’re the only people who can resolve these issues. We know who the criminals are," said Anwar Saleem, executive director of H Street Main Street.

Saleem also warned others that if you commit a crime on H Street, you will get caught. Business owners are keeping an eye out.

"We have been made aware that Brian Robinson, Jr. was the victim of an attempted robbery or carjacking in Washington, D.C. He sustained non-life-threatening injuries and is currently being treated at the hospital, where Team officials are on-site with him. We ask that you please respect Brian's privacy at this time."

"I just got done visiting w/Brian. He is in good spirits and wanted me to thank everyone for their kind words, prayers & support. He wants his teammates to know he appreciates them all for reaching out, and he loves them all & will be back soon doing what he does best."

Robinson Jr., 23, was drafted in the third round by the Commanders in the 2022 NFL Draft. He has been performing well at training camp and was reportedly in line to start at running back for the team in their first game of the regular season.