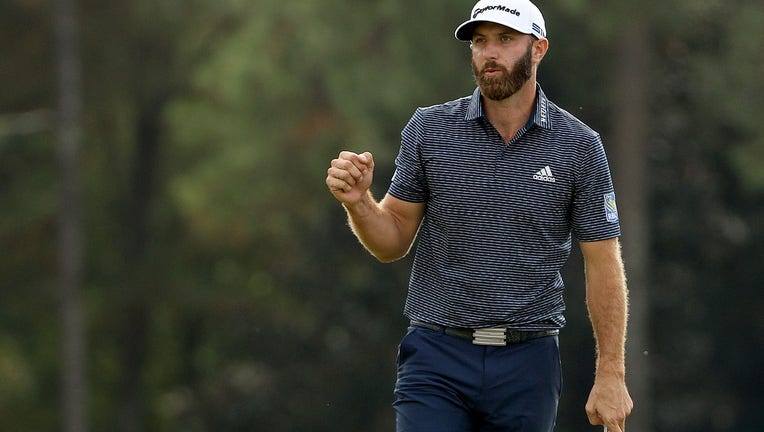 Dustin Johnson of the United States celebrates on the 18th green after winning the Masters at Augusta National Golf Club on November 15, 2020 in Augusta, Georgia. (Photo by Patrick Smith/Getty Images)

Organizations are calling for major sporting events to be moved out of Georgia after the state passed a controversial voting law Thursday.

Tony Clark, executive director of the MLB Players Association, said players are ready to discuss moving the annual All-Star Game in July, typically played in Atlanta, though they haven’t had a conversation with the league on the matter, according to the Boston Globe.

An op-ed in the Los Angeles Times also called for MLB to move the All-Star game.

The National Black Justice Coalition, a Black and LGBTQ civil rights group, said in a statement that golfers should refuse to play in the Masters, an annual tournament at Georgia's Augusta National Golf Course, unless the law is repealed.

"The PGA Tour and Masters Tournament have both made commitments to help diversify golf and address racial inequities in this country – and we expect them to not only speak out against Georgia’s new racist voter suppression law – but to also take action," the statement read.

The law was signed Thursday by Republican Gov. Brian Kemp after swiftly making its way through the state legislature.

Activists have also called for a boycott of Atlanta-based companies like Coca-Cola who have not expressly come out against the new law.

"Ford v Ferrari" and "Logan" director James Mangold tweeted Thursday, "I will not direct a film in Georgia."

"Georgia has been using cash to steal movie jobs from other states that allow people to vote. I don’t want to play there," Mangold told The Wrap. "I am not telling anyone else what to do. I just can’t work there till this changes."

Savannah Mayor Van Johnson said he would not be buying Coca-Cola products until the problem is resolved.

But Bernice King, daughter of Martin Luther King, Jr., said such boycotts would hurt lower-income people. "That would hurt middle class workers and people grappling with poverty," tweeted King. "It would increase the harm of both racism and classism."

The law standardizes voting hours from 9 a.m. to 5 p.m. or as long as 7 a.m. to 7 p.m. It requires two Saturdays of early voting instead of one and makes two Sundays optional for early voting. It continues to allow absentee voting without offering a reason but requires a state-issued ID to request a ballot.

The law also bans handing out water and food to voters waiting in line at the polls and shortens runoff elections from nine weeks to four weeks.

Under the law, ballot drop boxes are also limited. They will be placed at early voting locations but only available while the precincts are open. The law also tilts some power over elections to state lawmakers and the Georgia State Elections Board.

The law would also wrest election authority from Georgia’s secretary of state, allowing the Republican-controlled legislature instead to appoint a chair of the state election board.

The bill came after a Democratic sweep of two Senate seats and the presidential vote in Georgia, and repeated, unsubstantiated claims of mass election fraud by former President Trump.