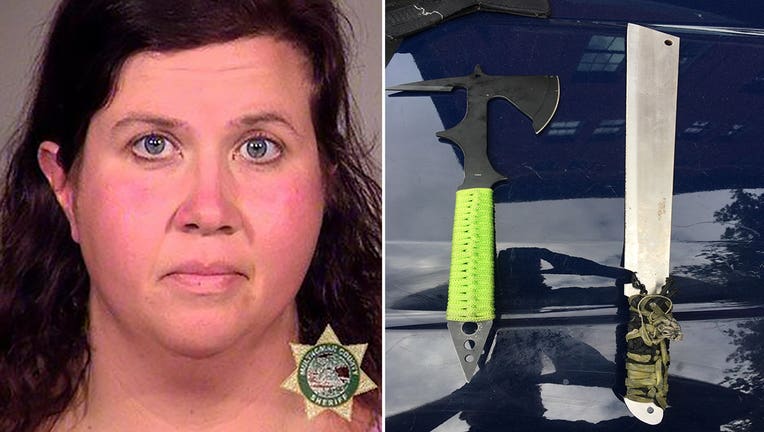 Zurcher-Wood attempted to kidnap a 6-year-old boy and threatened his family with a machete and ax, both of which were later found in her possession, police said. (Multnomah County Jail / Portland Police Bureau)

A machete- and ax-wielding Oregon woman was arrested Sunday after attempting to kidnap a 6-year-old boy, threatening his parents with the weapons and hurling racial slurs at the family, authorities said.

Elizabeth A. Zurcher-Wood, 37, approached a family that was waiting in line outside a pizzeria just before 4 p.m. in downtown Portland, the Portland Police Bureau said.

Zurcher-Wood told the family that she wanted to take the boy and lunged at him, according to police. When the family tried to back away and threw objects at Zurcher-Wood to keep her back, police said the suspect threatened them with the bladed weapons and used racial slurs before running away.

Officers were alerted to the attempted kidnapping and responded to Southwest 3rd Avenue and West Burnside Street. After being warned the suspect had a machete and an ax, officers found Zurcher-Wood a few blocks away.

Zurcher-Wood cooperated with officers and was arrested. The machete and ax found in her possession were seized as evidence, police said.