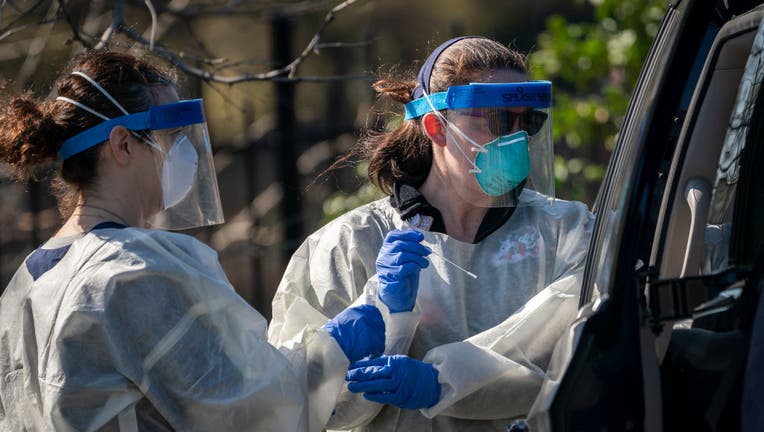 WASHINGTON, DC - APRIL 02: Medical professionals from Children's National Hospital administer a coronavirus test at a drive-thru testing site for children age 22 and under at Trinity University on April 2, 2020 in Washington, DC. Hundreds of children

Around a third of participants in a Massachusetts study tested positive for coronavirus, according to researchers.

The Mass. General study took samples from 200 residents on the street in Chelsea, MA. Participants remained anonymous and provided a drop of blood to researchers, who were able to produce a result in ten minutes with a rapid test.

Sixty-four of the participants tested positive – a “sobering” result, according to Thomas Ambrosino, Chelsea’s city manager.

He added: “Still, it's kind of sobering that 30 percent of a random group of 200 people that are showing no symptoms are, in fact, infected. It's all the more reason for everyone to be practicing physical distancing."

Ambrosino called Chelsea the epicenter of the crisis in Massachusetts. Chelsea has the state’s highest rate of confirmed cases, with at least 712 confirmed cases and 39 deaths – an infection rate of around 2 percent.

Doctors used a device made by BioMedomics to analyze the samples. The test hasn’t been approved by the FDA, but Mass. General approved the device for use.

While the participants appeared healthy, about half told the doctors that they experienced at least one symptom of COVID-19 in the past four weeks. Since participants remained anonymous, the doctors could not inform those who tested positive of their results.

Researchers hope to establish new test sites in other cities, with plans to obtain the identities of participants so they can be informed of their results.

“Knowing how many people are infected is critical," said Dr. Dean Xerras, medical director of the Mass. General Chelsea Healthcare center. “We need to get them isolated. We need to get masks delivered to the city. We need to launch more safe isolation sites. We need to be able to identify cases and then give people the things they need to prevent perpetuation of the spread."

Massachusetts is currently the third-most infected state in the country, with around 34,400 confirmed cases and 1,400 deaths.