The northern lights are actually aurora borealis, which is the result of electrons colliding with the upper reaches of Earth’s atmosphere. The lights are expected to illuminate the sky over Labor Day weekend.

NEW YORK - Northern lights are expected to illuminate the night sky with vivid glowing colors over Labor Day weekend in the northern United States, according to the U.S. National Oceanic and Atmospheric Administration.

The northern lights are actually aurora borealis, which is the result of electrons colliding with the upper reaches of Earth’s atmosphere, the NOAA’s website said.

The auroras could possibly be seen across the U.S. in northern states including Washington, Minnesota and New York, according to National Geographic.

This past week, a “monster-sized hole in the solar corona,” which is the upper atmosphere of the sun, cracked open, the publication reported. The occurrence released an intense gust of charged particles called solar wind, the report said. It is also a fast-moving cloud that is expected to lash Earth between Saturday and Sunday. 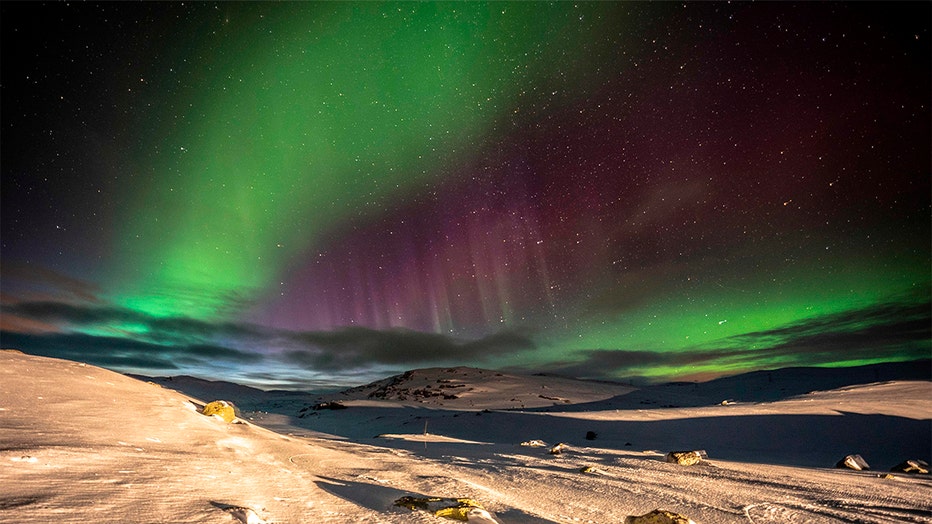 FILE: An aurora borealis light display is pictured in the southern part of Norway late night of Feb. 28, 2019. (Photo by HEIKO JUNGE/AFP/Getty Images)

When the solar storm cloud smashes into Earth, the collision will temporarily disturb our planet’s protective magnetic field, according to National Geographic. Electrons in the solar wind will accelerate as they follow the lines of Earth’s magnetic fields to the planet’s poles. There, they will “careen into air molecules” and spark the auroras, the report said.

The aurora will not be visible during daylight hours, according to the NOAA. It may be an hour or more before sunrise or after sunset that the aurora can be seen from the ground, the agency said.