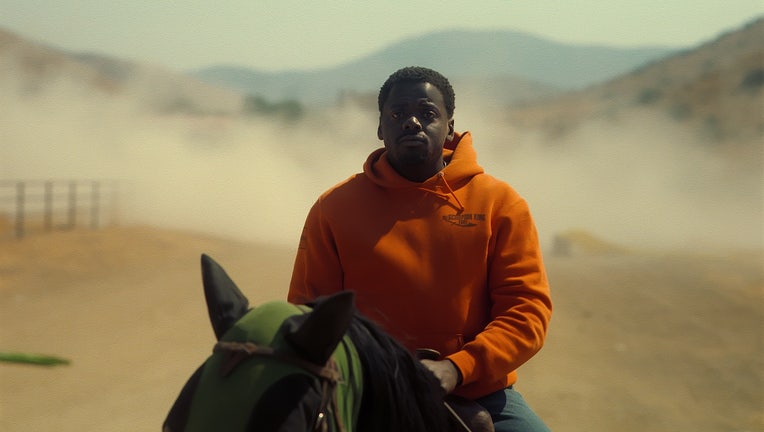 Chicago - "Nope" is "Get Out'' writer-director Jordan Peele’s third and most self-consciously mainstream film. That doesn’t mean that Peele has sacrificed daring for accessibility, however. Although it’s not as cryptic as his sophomore feature, 2019’s "Us," this is a multi-layered movie that — for better or for worse — follows its obsessions wherever they may lead.

What it does mean is that "Nope" adds rollicking Western adventure to Peele’s genre palette, making an intriguing case both for original summer blockbusters and for Peele as a filmmaker in the process.

About "Nope": A family affair 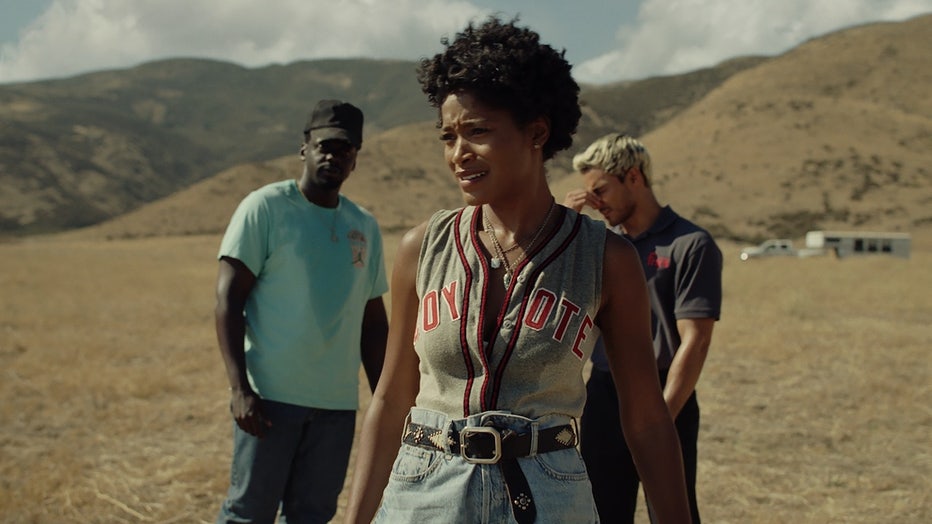 Three-fourths of this sprawling 135-minute film are clearly from the same Jordan Peele who rebooted "The Twilight Zone" for CBS All Access (now Paramount+) in 2019. Here, he’s spinning another uncanny sci-fi tale, this one set in the echoing canyons and dusty valleys of inland California. Haywood’s Hollywood Horses, a company that specializes in training horses for the screen, has been based in one of these lonely gulches for generations. But after the death of patriarch Otis Haywood, Sr. (Keith David) in a freak Fortean accident some six months past, his laconic son O.J. (Daniel Kaluuya) has begun selling off horses in what looks like the end for the once-thriving Haywood empire. O.J.’s little sister Emerald (Keke Palmer) finds this state of affairs unacceptable — although as a freelance actress, producer, makeup artist and sometime singer, she’s also ill-prepared to save the family business.

WATCH: Tubi’s collection of free Westerns — get the app

With all this in mind, the appearance of a oil-black disc that darts in and out of the clouds over the valley every night seems like a blessing from space. Ever the dreamer, Emerald convinces her more practical brother that if they can just get a definitive photograph of the object — "the Oprah shot," as she calls it — they can sell the image for hundreds of thousands of dollars and use the money to salvage the ranch. Their subsequent trip to a big-box electronics store catches the attention of amateur UFOlogist Angel (Brandon Perea), who keeps showing up at the Haywood homestead after he figures out why these two are installing an elaborate video surveillance system for a house with only one neighbor. 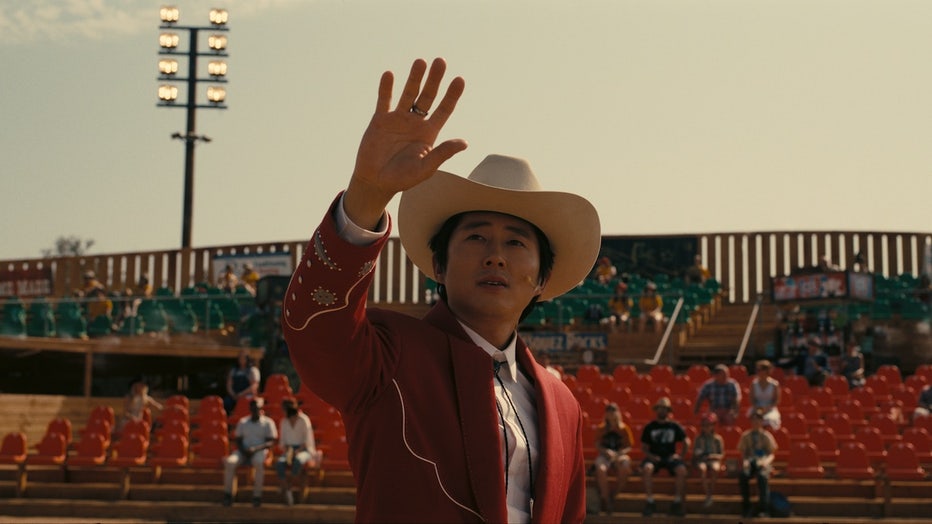 Speaking of: Ricky "Jupe" Park (Steven Yeun), a former child actor who owns an Old West theme park just down the road, is also aware of the "phenomenon." And he has his own plans to capitalize on it — just as he does his childhood trauma as the survivor of a grotesque ape attack on the set of the (fictional) ‘90s family sitcom "Gordy’s Home." This confluence of money, fame and exploitation of the natural world drives the story going forward, and "Nope" takes on shades of "Jaws" and "Jurassic Park" as the true nature of the alien presence over Agua Dulce is gradually revealed.

WATCH FREE ON TUBI: "Jaws" — get the app 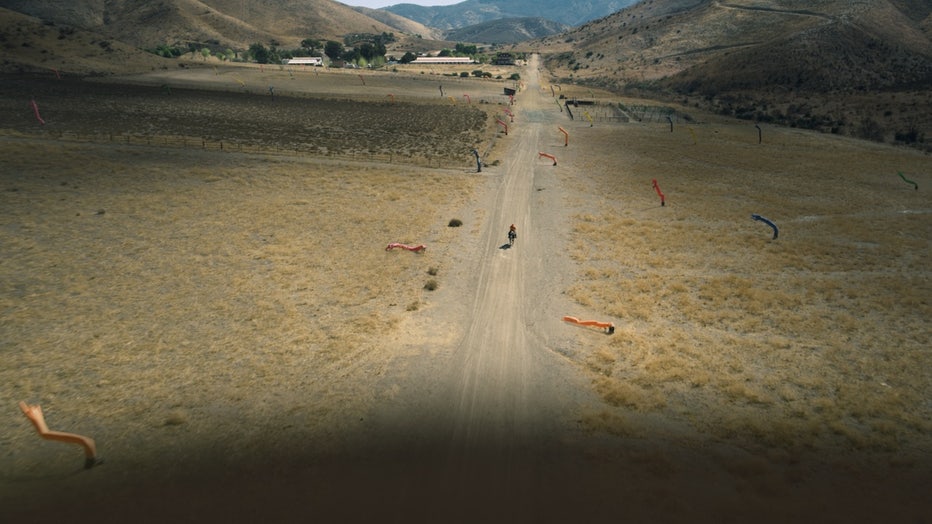 "Nope" pulls off a neat trick by functioning both as a blockbuster sci-fi adventure and as commentary on the industry that makes them, questioning whether the entertaining ends justify the meat-grinder means. It does so through its characters, whose obsession with "getting the shot" comes at the expense of both their safety and their sanity. (One example: Late in the film, a minor character cries in despair, "where’s your phone? Why aren’t you filming?!" as he’s being saved from certain death.) At the same time, however, the multiple thematic threads of "Nope" divide the movie’s attention. And, perhaps, inevitably, a few of them do get forgotten as the film barrels towards its thrilling conclusion.

WATCH FREE ON TUBI: "Aliens, Abductions, and UFOs: Roswell at 75" — get the app

When "Nope" isn’t distracted by its ambition, however, it delivers on all of its promises. The sci-fi horror scenes are well-crafted and wonderfully thrilling, cut with masterfully timed humor — the deployment of the title alone earns this movie a lot of good will — and shot with an eye for imagery that uses such unexpected items as slushie machines and inflatable air dancers to suspenseful ends. The chemistry between the leads is lively and believable, the sound design is legitimately chilling and the soundtrack is peppered with the warm analog sounds of artists like Dionne Warwick, The Congos and Exuma.

The film works as both a piece of escapist entertainment and as a road map, sending viewers down such fascinating potential rabbit holes as the history of Black cowboys in America and the subtleties of interspecies communication. No longer an upstart newcomer, "Nope" proves that Jordan Peele is a director of taste and originality, with some serious filmmaking chops. In an era where all those qualities are in such painfully short supply — especially in the summer-blockbuster arena in which "Nope" so clearly came to play — how can we begrudge him for having a few too many ideas?

About the writer: Katie Rife is a film critic, programmer, and former Senior Writer of The A.V. Club. Her work has appeared in Rolling Stone, Vulture, and Indiewire, among other outlets.

Make it a double feature with "I Spit on Your Grave," streaming free on Tubi

I Spit on Your Grave (1978): In the years that followed its ban in countries like the U.K. (it was branded a "video nasty"), "I Spit on Your Grave" has been elevated to cult status while also leading to sequels and remakes (including Steven R. Monroe’s 2010 version). Many words have been dedicated to this film, including critic Roger Ebert famously calling it "a vile piece of garbage." Rated R. 101 minutes. Dir: Meir Zarchi. Featuring: Camille Keaton, Eron Tabor, Richard Pace, Anthony Nichols, Gunter Kleeman.

How to watch "Nope"

"Nope" galloped into theaters everywhere on July 22. It is not currently available to stream.