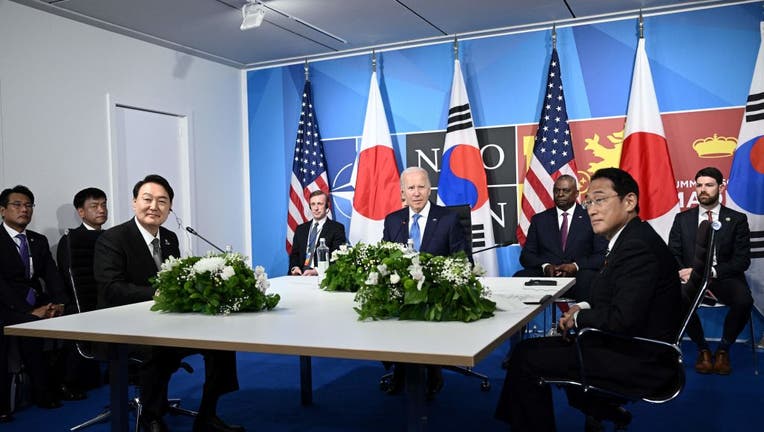 MADRID (AP) - NATO has for the first time singled out China as one of its strategic priorities for the next decade, warning about its growing military ambitions, confrontational rhetoric toward Taiwan and other neighbors, and increasingly close ties to Russia.

While Russia’s war against Ukraine has dominated discussions at the NATO summit, China earned a place Wednesday among the Western alliance’s most worrying security concerns.

"China is not our adversary," Stoltenberg said, "but we must be clear-eyed about the serious challenges it represents."

The strategic document directed its harshest language at Russia, but the mere mention of China was significant; the 2010 document did not discuss China. The official turn by NATO puts the world’s largest military alliance based on the United States armed forces on guard against China, which has the world's second-largest economy and a rapidly growing military, both in numbers and in top-notch technology.

National security expert Hal Kempfer explains what a Finland and Sweden NATO membership means for the Russian invasion of Ukraine.

"One of the things that (China’s) doing is seeking to undermine the rules-based international order that we adhere to, that we believe in, that we helped build," said U.S. Secretary of State Antony Blinken. "And if China’s challenging it in one way or another, we will stand up to that."

China has yet to condemn Russia's four-month long war against Ukraine and has criticized sanctions brought against Moscow by NATO members.

A year ago, Russia and China extended a friendship treaty promising even more "strategic cooperation" in defending their common interests. That was followed up in November with an agreement to strengthen their military ties. Weeks before Russia’s February invasion, Chinese leader Xi Jinping hosted his Russian counterpart Vladimir Putin for a summit at which they pledged a partnership that had "no limits."

Western leaders are concerned that Russia's aggression in Ukraine could embolden China to be more assertive over Taiwan. China considers Taiwan a part of its territory with no right to independent recognition as a state or representation on the world stage.

Speaking at an event in Madrid that was not part of the NATO summit, British Foreign Secretary Liz Truss said that unless China is checked "there is a real risk that they draw the wrong idea which results in a catastrophic miscalculation such as invading Taiwan," referring to the self-governing island that China claims as a province.

However, in a move interpreted to show it was somewhat uneasy over the war in Ukraine, China voted to abstain in a United Nations motion to demand Russia halt its attack.

China has greatly increased its diplomatic reach via foreign investment, above all in central Asia and Africa. Now it is seeking to match that with greater military might, especially in the South China Sea where it has built bases on disputed islands. The U.S. navy has pushed back by conducting drills in those waters.

The gathering of world leaders in Madrid, both inside the NATO summit and on its sidelines, included many from Asian nations.

It was the first time that the leaders of Japan, South Korea, Australia and New Zealand were invited to a NATO summit. They participated in a NATO session on new global challenges after holding a side meeting outside of the summit. And United States president Joe Biden sat down with the leaders of Japan and South Korea.

Earlier on Wednesday, Chinese Foreign Ministry spokesperson Zhao Lijian said that NATO members had been "creating tension and provoking conflicts" by sending warships and aircraft into areas close to the Asian mainland and the South China Sea.

NATO should "give up the Cold War mentality, zero-sum game and the practice of creating enemies, and not try to mess up Asia and the whole world after disrupting Europe," Zhao said.

Beijing continues to claim it is neutral in the Ukraine war, and it has accused NATO and the U.S. of provoking Russia into military action.

"Facts have proven that sanctions are not a way out of conflicts, and the continued delivery of weapons will not help realize peace," Zhao said.

NATO allies debated fiercely over how to frame their approach toward China. High-level Spanish and French diplomatic officials told The Associated Press that their delegations insisted on China being considered a "challenge" and not a "threat" like Russia.

But one thing was clear: Ignoring China was no longer an option.

"The challenges we all face are truly global," Stoltenberg told the Western allies. "The international balance of power is shifting, and strategic competition is on the rise."

AP writer Christopher Bodeen contributed to this report from Beijing.