The Montgomery County Police Department is investigating a case where someone may be claiming to be an employee of&nbsp;a well-known business, but according to some residents, the claim is turning out to be fake.&nbsp;

GAITHERSBURG, Md. (FOX 5 DC) - The Montgomery County Police Department is investigating a case where someone may be claiming to be an employee of a well-known business, but according to some residents, the claim is turning out to be fake.

Lea, a woman in Germantown who did not want to provide her last name, contacted FOX 5 about the potential scam. She said back in January she contacted Benson Garage Doors after she said she conducted an online search on her cellphone. She said the number she called put her in touch with a technician claiming to be with the Gaithersburg based business.

“When the gentleman came up I asked, ‘Why doesn’t your car have a Benson Garage Doors name on it?’’ she explained. “He said, ‘It’s a new car and I don’t have a name on it.”

Lea said that was the first clue that made her think something wasn’t right.

She said the man who claimed to be with Benson Garage Doors installed her garage door but then when it came to paying for it, the credit card receipt looked a little strange.

“There was nothing on the receipt,” she said, “it didn’t say what product he used or what’s the company name or his name or does it even have a warranty.”

Lea said she called the real Benson Garage Doors the next day and to her surprise, they had never sent anyone her way. The company also told her that they don’t take credit cards nor are they opened 24-hours as indicated on her online search.

“We’ve had a couple of other customers in the past call us with similar complaints,” said co-owner, Mary Myers. “I mean if they do shoddy work then we get a bad reputation from somebody that’s not us.” 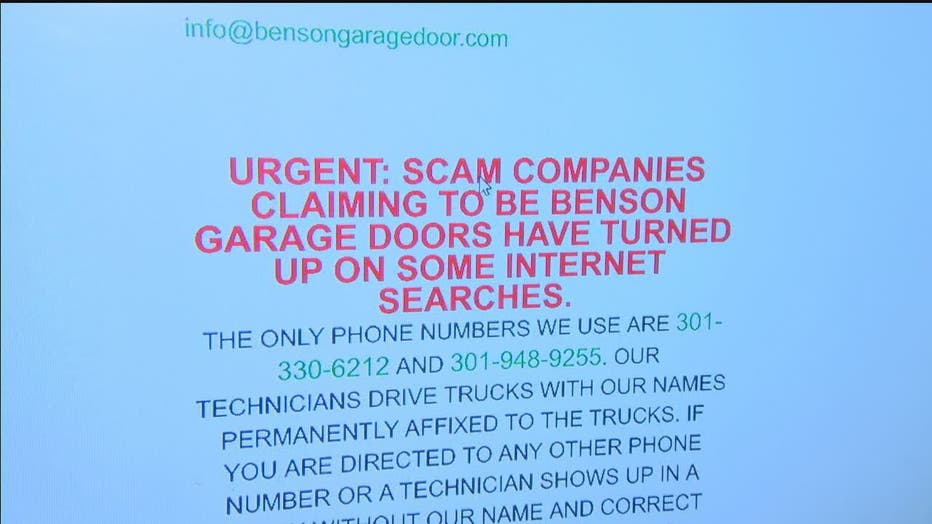 FOX 5 conducted the same online search that produced the number, 1-888-676-5428, instead of 301-330-6212. When we dialed the first number, it continuously rang. We then called a cellphone number Lea gave us for the technician. When he answered, we made him aware of who we were and that he was being recorded.

When we told him that the company does not have him listed as an employee he continued to say that he was before directing us to call his boss on another number. When we did, no one answered and there was no voicemail either.

“I hope this doesn’t happen to anyone because I still don’t know who these people are,” said Lea.

“I would say when you do a search, look at where it’s sending you,” said Myers.

We also contacted the Better Business Bureau. They told us that it's easy for someone to duplicate a website or digital ads for a business.

Consumers need to do their own research on bbb.org. The information is given directly from the business to BBB before it’s published online. Every consumer should verify they are working and in contact with the correct business.