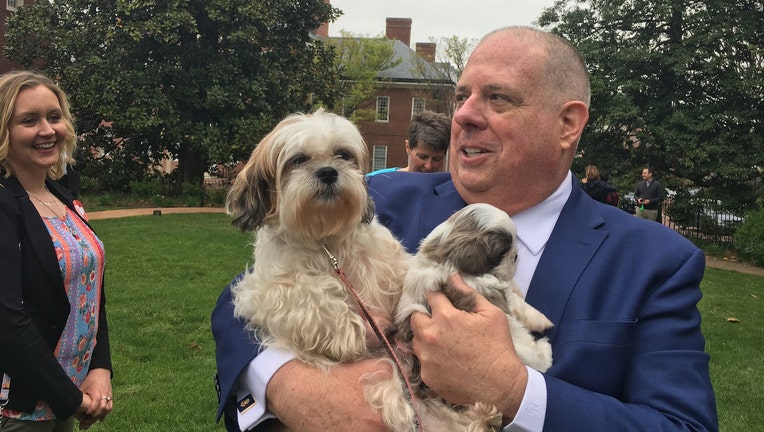 SILVER SPRING, Md. - Pet stores are suing to block a Maryland law that will bar them from selling commercially bred dogs and cats, a measure billed as a check against unlicensed and substandard "puppy mills."

The stores' federal lawsuit, filed Friday, challenges a ban set to take effect on Jan. 1, 2020. Maryland is the second state, after California, to pass such restrictions on the sale of dogs and cats.

The pet stores fear the ban will put them out of business. Their suit says animal welfare organizations have made unfounded claims that pet stores are fueling the growth of puppy mills.

Pet stores are suing to block a Maryland law that will bar them from selling commercially bred dogs and cats, a measure billed as a check against unlicensed and substandard "puppy mills."

Charm City Puppies manager Becky Schmidt, whose Columbia store is one of the plaintiffs, said it only uses breeders that are "quality-inspected" and federally regulated.

"If anything, if our doors close, it's going to force consumers to have to go to the unregulated, uninspected sources," Schmidt said Monday.

The lawsuit claims the ban effectively will do just that, shifting the sale of puppies from regulated retailers to unregulated sources, such as sellers placing ads on the internet or in newspapers.

"Internet pet sales have a notoriously high incidence of fraud and scams which will only increase against Maryland residents once the ban takes effect," the suit says.

Gov. Larry Hogan, a Republican, signed the legislation into law in April 2018.

The first law of this kind took effect in January in California. It prohibits pet stores from selling a dog, cat, or rabbit unless it came from an animal shelter or rescue group. Some local governments, including in Maryland, already have enacted similar measures. Maine's Legislature passed a bill limiting sales of dogs and cats by pet shops, but Gov. Janet Mills is holding it until January.

Maryland's law encourages animal welfare organizations to collaborate with retail pet stores to showcase cats and dogs for adoption or purchase from "local breeders," according to a summary of the legislation prepared by state analysts.

The pet stores' lawsuit claims the ban is unconstitutional, violating the Commerce Clause. The legislation's intent to facilitate sales from local breeders discriminates against out-of-state breeders and brokers, the suit says.

"The Maryland Pet Store Ban's purpose is to remove Maryland from the nationwide market of pet sales in stores in hopes of eradicating the so-called puppy mill industry. However, a State may not achieve a local economic goal by isolating itself from the national economy," the suit says.

State Sen. Ben Kramer, a Democrat who sponsored the legislation when he served in the state House of Delegates, said retail sales of dogs are keeping puppy mills in business.

Plaintiffs' attorney Jonathan Kagan said the sale of dogs and cats is the primary source of revenue for pet stores that are suing.

"These are smaller pet stores that have been around for a while," he said. "They are not going to be able to compete with PetSmart or Petco if they're just selling (pet) accessories."

John Goodwin, senior director of the Stop Puppy Mills campaign for the Humane Society of the U.S., said dog and cat sales account for a small fraction of the multibillion-dollar pet industry. "There are thousands of small independent pet stores that thrive on selling products and services," he added.

Kagan said Maryland already had strict laws "with high standards for stores" before the passage of the 2018 legislation. Kramer, however, said the pet stores "basically thumbed their noses at the new requirements that were in place."

The defendants include the state Senate's finance committee and Maryland Attorney General Brian Frosh, whose office will be responsible for enforcing the ban.

Schmidt, the Columbia store's manager, said 20 employees will lose their jobs and customers will lose access to purebred puppies if the store has to close.