LOS ANGELES - Researchers have partnered with Major League Baseball employees in a 10,000-person study aimed at further understanding the rate of infection of the novel coronavirus in the United States.

The New York Times reported that each participant will have a finger pricked, producing blood that will be tested for the presence of antibodies.

These antibodies, taken from a large population spread out across the U.S., will help researchers determine whether or not a previous infection of COVID-19 existed, which will help narrow down signs of immunity against the virus.

The study will be conducted by teams of researchers from Stanford University and the University of Southern California, as well as the Sports Medicine Research and Testing Laboratory in Salt Lake City.

“This kind of study would have taken years to organize outside of this setting,” said Dr. Jay Bhattacharya, professor of medicine at Stanford and one of the study’s leading scientists, told the Times. “With the help of MLB, we’ve managed to do this in a matter of weeks.”

Because of the shelter-in-place orders in effect across the country, many players will reportedly be receiving kits in the mail.

The Dodgers, San Francisco Giants and Arizona Diamondbacks are among the 27 of 30 of the Major League Baseball teams participating in a study of the novel coronavirus that will test hundreds of people — including players — from the various clubs for antibodies.

Nationwide study on MLB players, employees, and Dodgers’ Clayton Kershaw talks about not having a season

The Dodgers and 27 of the 30 baseball teams are going to take part in a nationwide study on COVID-19. Players and employees will be a part of 10,000 people in MLB to get tested for antibodies. The study is being done by Stanford, USC, and the Sports Medicine Research and Testing Laboratory.

Arizona, Los Angeles and San Francisco’s teams confirmed that they were participating.

The Oakland Athletics also are taking part, a person with direct knowledge of the club's decision told The Associated Press on Tuesday, speaking on condition of anonymity because specific details weren't made public. Stanford University is one of the institutions running the study. 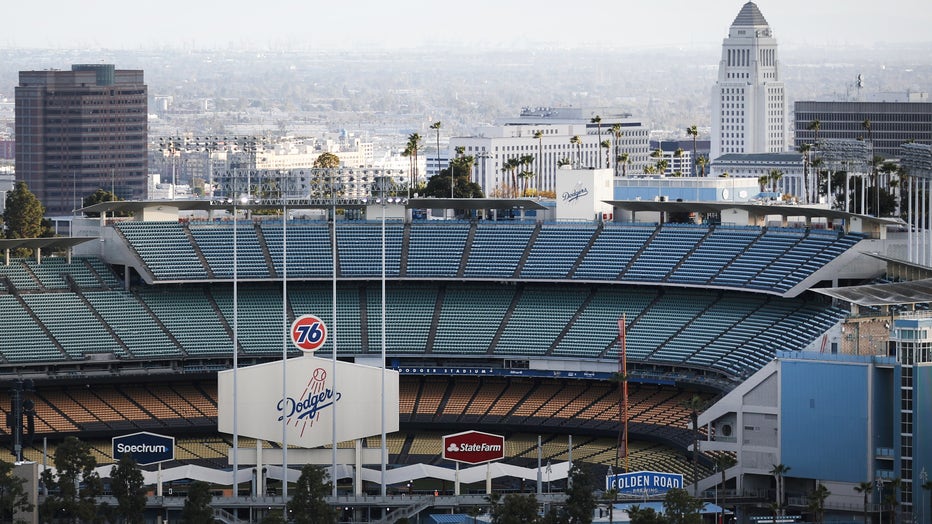 FILE - Dodger Stadium is viewed on what was supposed to be Major League Baseball's opening day, now postponed due to the coronavirus, on March 26, 2020 in Los Angeles, California. (Photo by Mario Tama/Getty Images)

Which employees are in the study varies by teams, the person said without offering specifics on who with Oakland had been tested.

Another person with knowledge of the study said each organization decided who would be tested, such as front-office executives, full-time employees or players — who were given the option to participate.

The As have been affected by COVID-19, with minor league manager Webster Garrison on a ventilator in a Louisiana hospital to treat the virus. His fiancee, Nikki Trudeaux, posted Monday that he still was using the ventilator but she was able to see his eyes thanks to a nurse who helped them connect through a video call.

For most people, the new coronavirus causes mild or moderate symptoms, such as fever and cough that clear up in two to three weeks. Older adults and people with existing health problems can experience severe illness, including pneumonia and death.