Madeleine Albright, 1st female US secretary of state, dead at 84

Madeleine Albright, the first female U.S. secretary of state, has died of cancer, her family said Wednesday. President Bill Clinton chose Albright as America’s top diplomat in 1996, and she served in that capacity for the last four years of the Clinton administration.

Madeleine Albright, a child refugee from Nazi- and then Soviet-dominated Eastern Europe who rose to become the first female secretary of state and a mentor to many current and former American statesmen and women, died Wednesday of cancer, her family said. She was 84.

A lifelong Democrat who nonetheless worked to bring Republicans into her orbit, Albright was chosen in 1996 by President Bill Clinton to be America's top diplomat, elevating her from U.S. ambassador to the United Nations, where she had been only the second woman to hold that job.

As secretary of state, Albright was the highest-ranking woman in the history of the U.S. government. She was not in the line of succession to the presidency, however, because she was born in what was then Czechoslovakia. Still, she was universally admired for breaking a glass ceiling, even by her political detractors.

"We have lost a loving mother, grandmother, sister, aunt and friend," her family said in a statement.

President Joe Biden ordered flags at the White House and other federal buildings and grounds to be flown at half-staff until March 27.

Biden said, "America had no more committed champion of democracy and human rights than Secretary Albright, who knew personally and wrote powerfully of the perils of autocracy."

"When I think of Madeleine," Biden added, "I will always remember her fervent faith that ‘America is the indispensable nation.’"

Clinton called her "one of the finest Secretaries of State, an outstanding U.N. Ambassador, a brilliant professor, and an extraordinary human being."

"Because she knew firsthand that America’s policy decisions had the power to make a difference in people’s lives around the world, she saw her jobs as both an obligation and an opportunity," Clinton wrote. "And through it all, even until our last conversation just two weeks ago, she never lost her great sense of humor or her determination to go out with her boots on, supporting Ukraine in its fight to preserve freedom and democracy."

Former President George W. Bush said Albright "lived out the American dream and helped others realize it. ... She served with distinction as a foreign-born foreign minister who understood firsthand the importance of free societies for peace in our world."

Linda Thomas-Greenfield, U.S. envoy to the United Nations, honored Albright as a "trailblazer and a luminary" in remarks on the General Assembly floor. 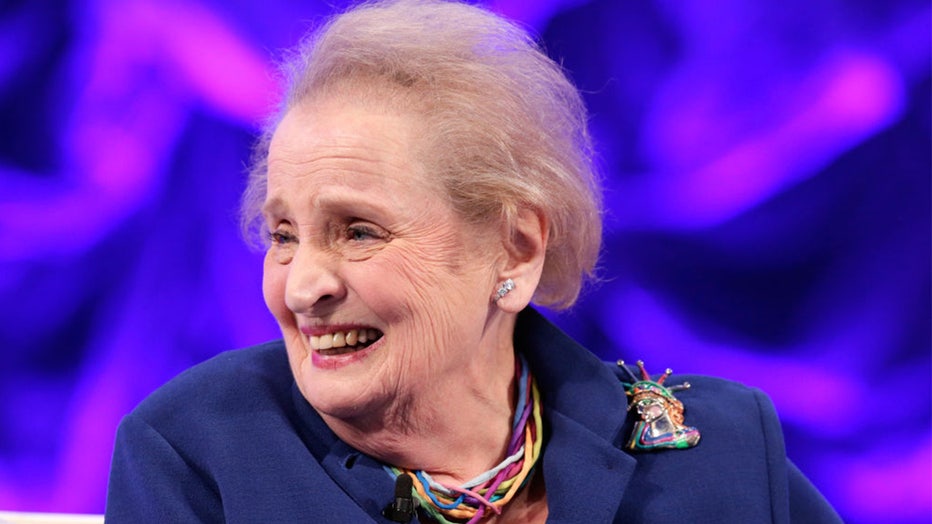 "The impact that she has had on this building is felt every single day and just about every single corridor," said State Department spokesman Ned Price, who once co-taught a class with Albright at his alma mater, Georgetown University's School of Foreign Service, where Albright was a professor for decades before and after her time in government.

In 2012, President Barack Obama awarded Albright the Medal of Freedom, the nation’s highest civilian honor, saying her life was an inspiration to all Americans.

Albright remained outspoken through the years. After leaving office, she criticized Bush for using "the shock of force" rather than alliances to foster diplomacy and said Bush had driven away moderate Arab leaders and created potential for a dangerous rift with European allies.

As a refugee from Czechoslovakia who saw the horrors of both Nazi Germany and the Iron Curtain, she was not a dove and she played a leading role in pressing for the Clinton administration to get militarily involved in the conflict in Kosovo.

She also took a hard line on Cuba, famously saying at the United Nations that the Cuban shootdown of a civilian plane was not "cojones" but rather "cowardice."

Albright advised women "to act in a more confident manner" and "to ask questions when they occur and don’t wait to ask."

"It took me quite a long time to develop a voice, and now that I have it, I am not going to be silent," she told HuffPost Living in 2010.

When the Senate Foreign Relations Committee asked her in January 2007 whether she approved of Bush’s proposed "surge" in U.S. troops in bloodied Iraq, she responded: "I think we need a surge in diplomacy. We are viewed in the Middle East as a colonial power and our motives are suspect."

Albright was an internationalist whose point of view was shaped in part by her background. Her family fled Czechoslovakia in 1939 as the Nazis took over their country, and she spent the war years in London. After the war, as the Soviet Union took over vast chunks of Eastern Europe, her father, a Czech diplomat, brought his family to the United States.

As secretary of state, Albright played a key role in persuading Clinton to go to war against the Yugoslav leader Slobodan Milosevic over his treatment of Kosovar Albanians in 1999. As U.N. ambassador, she advocated a tough U.S. foreign policy, particularly in the case of Milosevic’s treatment of Bosnia and NATO’s intervention in Kosovo, was eventually dubbed "Madeleine's War."

"My mindset is Munich," she said frequently, referring to the German city where the Western allies abandoned her homeland to the Nazis. 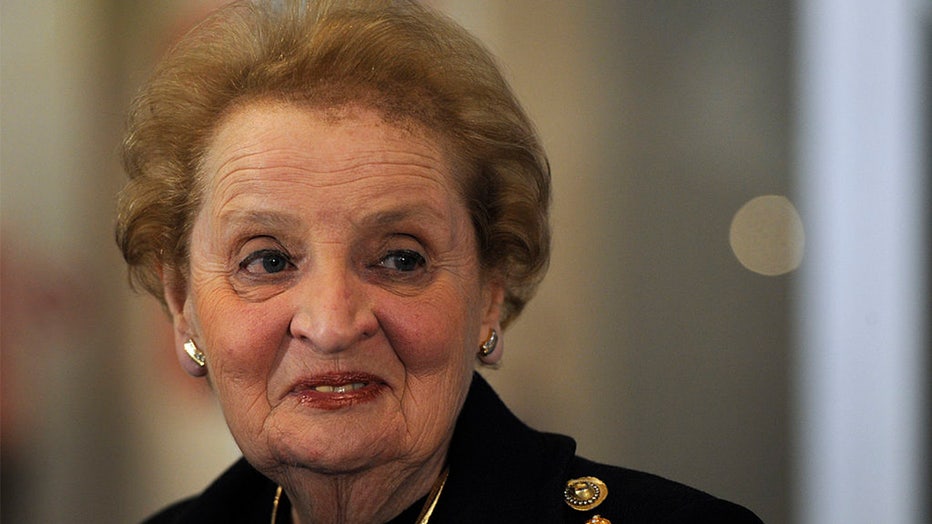 FILE - Former U.S Secretary of State Madeleine Albright leads a small tour of the more than 200 pins she has collected that are on exhibit at the Denver Art Museum in downtown Denver on Friday, April, 13, 2012.  (Kathryn Scott Osler/The Denver Post via Getty Images)

Albright helped win Senate ratification of NATO’s expansion and a treaty imposing international restrictions on chemical weapons. She led a successful fight to keep Egyptian diplomat Boutros Boutros-Ghali from a second term as secretary-general of the United Nations. He accused her of deception and posing as a friend.

And she once exclaimed to Colin Powell, then chairman of the Joint Chiefs of Staff, who would later succeed her as secretary of state: "What’s the point of having this superb military you’re always talking about if we can’t use it?"

Powell, who died last year, recalled in a memoir that Albright’s comment almost made him have an "aneurysm."

Despite her championing of diplomacy in the Middle East and a late Clinton-era foray to North Korea, which made her the highest-ranking U.S. official to visit the Stalinist state, Albright drew criticism for her support of sanctions against Iraq that many blame for humanitarian suffering in the country under Saddam Hussein.

"I am an eternal optimist," Albright said in 1998, amid an effort as secretary of state to promote peace in the Middle East. But she said getting Israel to pull back on the West Bank and the Palestinians to rout terrorists posed serious problems. 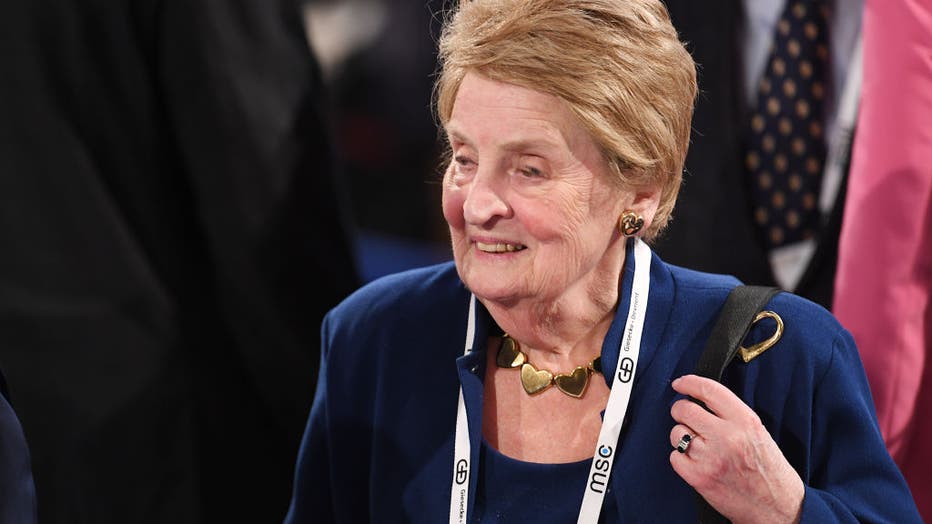 Madeleine Albright, former US Secretary of State, recorded on the first day of the 56th Munich Security Conference. (Photo by Tobias Hase/picture alliance via Getty Images)

She also spearheaded an ill-fated effort to negotiate a 2000 peace deal between Israel and Syria under then-President Hafez al-Assad. She helped guide U.S. foreign policy during conflicts in the Balkans and the Hutu-Tutsi genocide in Rwanda.

As an outspoken Democrat in private life, Albright often joked that she had her "political instincts surgically removed" when she became secretary of state. True to that, she formed an unlikely friendship with arch-conservative North Carolina Sen. Jesse Helms to increase funding for the State Department and U.S. diplomacy and oversaw a radical change in Washington's handling of Cold War-era messaging.

Born Marie Jana Korbel in Prague on May 15, 1937, she was the daughter of a diplomat, Joseph Korbel. The family was Jewish and converted to Roman Catholicism when she was 5. Three of her Jewish grandparents died in concentration camps.

Albright later said that she became aware of her Jewish background after she became secretary of state. The family returned to Czechoslovakia after World War II but fled again, this time to the United States, in 1948, after the Communists rose to power.

They settled in Denver, where her father obtained a job at the University of Denver. One of Josef Korbel’s best students, a young woman named Condoleezza Rice, would later succeed his daughter as secretary of state and was the first Black woman to hold that office.

Among current officials who worked closely with Albright are Biden's domestic policy adviser and former U.N. Ambassador Susan Rice, as well as Deputy Secretary of State Wendy Sherman and a host of others.

Albright graduated from Wellesley College in 1959. She worked as a journalist and later studied international relations at Columbia University, where she earned a master’s degree in 1968 and a Ph.D. in 1976.

She worked for the National Security Council during the Carter administration and advised Democrats on foreign policy before Clinton’s election. He nominated her as U.S. ambassador to the U.N. in 1993.

Following her service in the Clinton administration, she headed a global strategy firm, Albright Stonebridge, and was chair of an investment advisory company that focused on emerging markets.

She also wrote several books. Albright married journalist Joseph Albright, a descendant of Chicago’s Medill-Patterson newspaper dynasty, in 1959. They had three daughters and divorced in 1983.