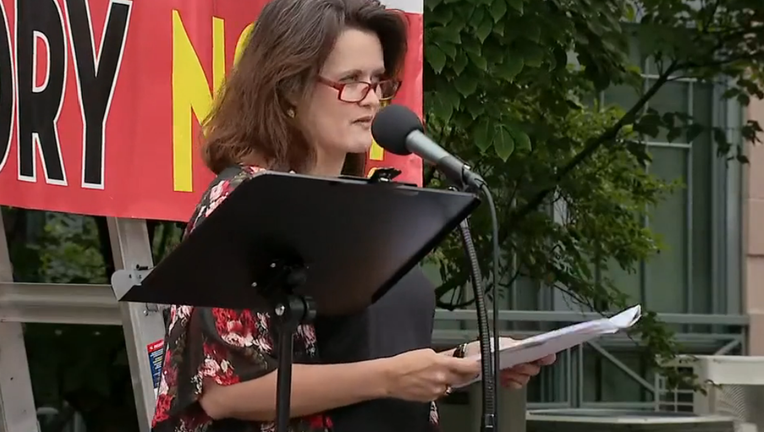 Monica Gill, a high school teacher, was among those to speak at the "Education, Not Indoctrination" rally Saturday.

Opponents of critical race theory panned the ideology Saturday during an "Education, Not Indoctrination" rally in a Virginia community that has become a flashpoint for the controversial curriculum amid a national debate over whether it belongs in public schools.

More than a dozen speakers delivered remarks outside the Loudoun County Government Center in Leesburg, including parents, activists and even a couple of district teachers opposed to the curriculum. An invitation to the event said demonstrators would meet to condemn what they perceive is the local school district’s embrace of CRT.

"While the experts make themselves prominent before the public... our student body suffers from a myriad of issues created by the very initiatives these race problem solvers say that they are here to fix," Monica Gill, a teacher at Loudoun County High School, told those who had gathered. "For example, I am witnessing some of our students in our White population experiencing the impact of equity. They are being told to check their White privilege – or they can't be a part of certain conversations because they are White.

"This is just one example of how critical race theory – or equity – treats everyone regardless of their color or race as mere avatars," she added.

Loudoun County Public Schools has denied teaching critical race theory. In March, its superintendent, Scott Ziegler, issued a statement saying "LCPS has not adopted Critical Race Theory as a framework for staff to adhere to."

"In explaining LCPS' equity priorities, it might be helpful to state what they are not. They are not an effort to indoctrinate students and staff into a particular philosophy or theory," he said. "What they are is an effort to provide a welcoming, inclusive, affirming environment for all students."

But Loudoun has repeatedly made national headlines for conflicts of wokeness and social justice at school board meetings.

On Tuesday, local mom Xi Van Fleet, a survivor of China’s decade-long Cultural Revolution who immigrated to the U.S. in her 20s, excoriated the school board during a public meeting and compared CRT directly to Mao Zedong’s purge of anyone and anything deemed "counterrevolutionary" by the Communist Party.

"To me, and to a lot of Chinese, it is heartbreaking that we escaped communism and now we experience communism here," she told Fox News Wednesday.

"The Communist regime used the same critical theory to divide people," she said. "The only difference is they used class instead of race."

In early June, parents in Loudoun County also sued administrators over initiatives that allegedly chill free speech and discriminate based on race.

Filed in federal court on June 2, the lawsuit argues that Loudoun County Public Schools and its "equity student ambassador" program restrict eligibility to non-White individuals and requires they hold certain views about social justice. It also targets a bias response system designed to flag perceived microaggressions or other incidents of "bias" between students.

Often compared by critics to actual racism, CRT is a school of thought that generally focuses on how power structures and institutions impact racial minorities.

Race, according to this view, is a relatively recent social construct that is weaponized by dominant groups to oppress others.

While institutions have been mulling these ideas for years, the aftermath of George Floyd's death seemed to amplify its influence across the country. A so-called "racial reckoning" has seen the propagation of various ideas that are often associated with CRT. Certain buzzwords like "systemic racism" or "implicit bias" have emerged in school districts' diversity statements, corporate trainings, educational materials and government agencies.

Melody Clarke, an event organizer and regional coordinator for Heritage Action for America, told Fox News Friday prior to the rally that "CRT seeks to diminish the reality that we are all unique and precious in God’s eyes."

"Our individual destiny is up to our God-given talent, drive and ambition, not what someone else thinks about us," she added.

Her group aims to encourage parents around the country to vocally oppose CRT implementation in their schools, she said.

"Children should be taught to be nice and work hard," Clarke said. "It really is that simple."

There is strong opposition to CRT in the community, according to Ian Prior, a father of two students in the district and a former senior Justice Department official who is one of the listed speakers.

"Parents in Loudoun County are fired up," he told Fox News Friday. "They've been out all day, every day trying to end the culture of fear and intimidation infecting Loudoun County Public Schools. And now teachers are joining them and saying – enough. We cannot teach this religion of divisions anymore."

A district spokesperson declined to comment on the rally.