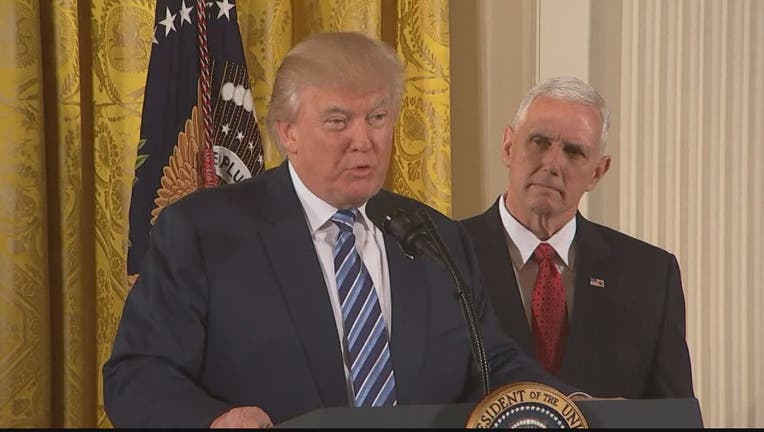 NEW YORK (AP) -- To fight what it called a "grave threat" to the country, a watchdog group on Monday filed a lawsuit alleging that President Donald Trump is violating the Constitution by allowing his business to accept payments from foreign governments.

The lawsuit claims that a constitutional clause prohibits Trump from receiving money from diplomats for stays at his hotels or foreign governments for leases of office space in his buildings.

The language in the clause is disputed by legal experts, and some think the lawsuit will fail. But it signals the start of a legal assault on what Trump critics see as unprecedented conflicts between his business and the presidency.

Trump called the lawsuit "without merit, totally without merit" after he signed some of his first executive actions Monday in the Oval Office.

The watchdog group Citizens for Responsibility and Ethics in Washington filed the lawsuit in the Southern District of New York.

The group is being represented in part by two former White House chief ethics lawyers: Norman Eisen, who advised Barack Obama, and Richard Painter, who worked under George W. Bush. The two have expressed frustration that Trump has refused to take their recommendation and divest from his business, and feel they had no choice but to take legal action.

"As the Framers were aware, private financial interests can subtly sway even the most virtuous leaders," the lawsuit argues, "and entanglements between American officials and foreign powers could pose a creeping, insidious threat to the Republic."

At a news conference earlier this month, Trump Organization lawyer Sheri Dillon the so-called emoluments clause of the Constitution isn't meant to ban fair-value exchanges. They didn't think "paying your hotel bill was an emolument," she said.

Trump drew fresh attacks from critics almost the moment he took the oath of office on Friday.

The group behind Monday's lawsuit also filed a complaint Friday addressed to the General Services Administration, an agency that oversees the lease of the government-owned building that houses Trump's new Washington hotel. The complaint argued the agency must cancel the lease because it expressly forbids any elected official from benefiting from it.

GSA officials had said they needed to wait until Trump took office before weighing in on the issue. They have yet to issue an opinion, though, and have not responded to repeated requests for comment. Democrats in the House and Senate on Monday sent letters to Acting Administrator Timothy Horne seeking information about what the agency plans to do.

In the new lawsuit, the group faces several legal hurdles, including making the case that it even has standing to bring the suit.

"There are a lot of issues that have to be litigated for the first time," said Noah Bookbinder, executive director of CREW. He added, though, that "we have never had a president who has in a significant way accepted foreign payments."

Bookbinder said his group will argue it has standing because the president has forced his organization to divert all it is resources to this fight rather than other issues, and therefore is harming it.

That line drew criticism from some legal experts.

Its argument for standing "barely passes the laugh test," said Robert Kelner, chairman of the election and political law group of the firm Covington & Burling and an experienced Republican attorney.

Edwin Williamson, a former State Department legal adviser, said that the group will struggle to prove its case. He agreed with Dillon's assessment that the emoluments clause does not apply the payment of a "market price" for a stay at a hotel.

Trump said at his news conference earlier this month that he would not sell his ownership in his company, but would hand over management control to his two adult sons. He pledged that his company would strike no more deals abroad and would donate any profits from foreign governments using his hotels to the U.S. Treasury.

Trump's companies began publicly filing paperwork on Monday to show that they're now being run by others. For example, Trump International Hotels Management LLC, registered in Florida, updated its paperwork with the secretary of state to list Eric Trump as president.

Although Dillon says Trump has taken "extraordinary" measures, many government ethics lawyers have panned them as insufficient. They note that no modern president has taken office with as much wealth and as sprawling and opaque a business.

His company, the Trump Organization, has stakes in golf resorts, office buildings, residential towers and hotel licensing deals in about 20 countries. Those include ones with which the U.S. has sensitive relations, such as the Philippines, Indonesia, South Korea and Turkey.

With so many business ties, particularly abroad, government ethics experts worry U.S. interests could take a back seat to his personal financial concerns. And even if they don't, they argue, people will try to curry favor with the new president by buying apartments in his towers or memberships in his golf resorts, raising doubts -- fair or not -- that U.S. policy is for sale.

The lawsuit on Monday says that Trump's company is receiving payments from foreign government-owned tenants at Trump Tower in New York, including The Abu Dhabi Tourism & Culture Authority and the Industrial and Commercial Bank of China.

It also argues Trump's "The Apprentice" could get him in trouble. It says government-owned stations in in the United Kingdom and Vietnam are paying for broadcast rights of versions of the reality TV hit.

Eisen and Painter have urged Trump to sell his holdings and put the cash in a blind trust, following the example of recent presidents.

Trump is bucking another presidential tradition by refusing to disclose his tax returns. He has said he would be happy to release them, but only after the completion of an Internal Revenue Service audit.

A public petition to the White House on Friday demanding he go public with his tax returns gathered more than 250,000 signatures -- well over the 100,000 needed to trigger an official response.

"The White House response is that he's not going to release his tax returns," senior White House adviser Kellyanne Conway said on ABC's This Week. "We litigated this all through the election. People didn't care."