ANNAPOLIS, Md. - The families of victims in the Capital Gazette shooting and some newspaper employees who survived the deadly 2018 attack dismissed civil charges against The Baltimore Sun and Tribune Publishing this week after settling the case, the newspaper said.

The Capital Gazette reported on Wednesday that the plaintiffs filed a joint notice in court with The Sun and Tribune, to dismiss the claims in Anne Arundel Circuit Court against the news organization and its parent company on Tuesday afternoon.

The negligence lawsuit, filed in 2021 shortly after the gunman, Jarrod Ramos, was found criminally responsible for the shooting, stated that the attack in Annapolis was "a preventable tragedy."

The lawsuit said if the defendants had "taken reasonable steps to protect The Capital and its employees," the gunman "would have been detected and stopped prior to entering The Capital’s newsroom, and he may never have attempted the assault at all."

The lawsuit was consolidated with a similar claim in early 2022.

After Tuesday’s filing, any dispute between the plaintiffs and the newspaper and its parent company is settled, Steven Silverman, an attorney for the families of Smith and Fischman said Wednesday. Everything else regarding the settlement, including the terms, are confidential, he said.

Tuesday marks the fourth anniversary of the deadliest attack on journalists in U.S. history and in memory of the five people who were killed at the Capital Gazette in Annapolis, Governor Larry Hogan declared today Freedom of the Press Day.

The newspaper reports that the notice does not dismiss claims against St. Johns Properties, the owner of building where the shooting happened. A previous filing said the plaintiffs had reached an agreement with St. Johns but were awaiting the settlement to be completed.

Ramos blasted his way into The Capital’s office with a shotgun, smoke bombs and a device that blocked his victims from fleeing. He shot and killed five employees. Six other employees inside the newsroom survived either by fleeing or hiding from Ramos.

After pleading guilty and being found criminally responsible for his actions, Ramos was sentenced in September 2021 to six terms of life in prison, five without the possibility of parole, plus 345 years — all to be served consecutively. 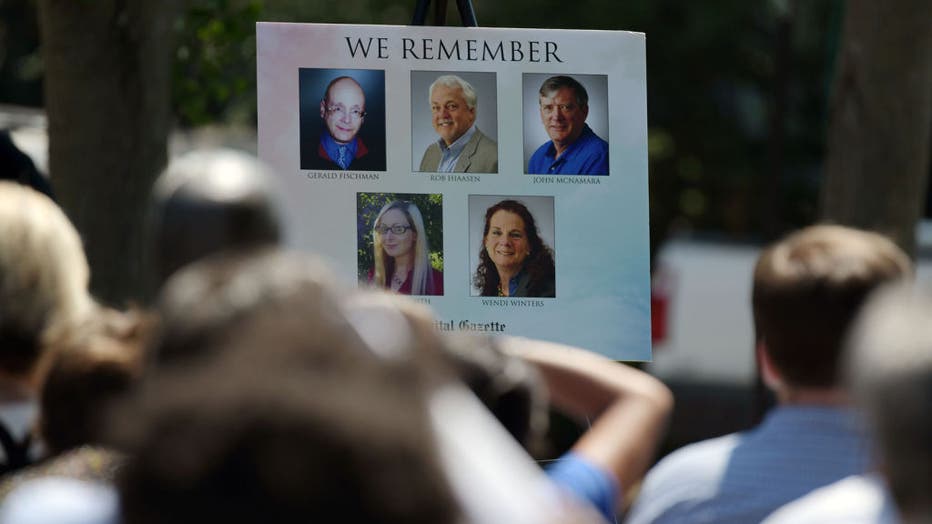 Photos of Gerald Fischman, Rob Hiaasen, John McNamara, Rebecca Smith and Wendi Winters, five people who were killed at the Capital Gazette one year ago, are displayed at the dedication of a Memorial Garden at the Actons Cove Waterfront Park. (Kim Hai

The lawsuit had claimed the newspaper companies "certainly should have known" that Ramos was a threat to journalists at The Capital due to litigation between him and the company, as well as a series of communications and tweets dating back to 2011 in which he threatened employees.

It accused The Sun and Tribune of failing to secure the newsroom against threats when The Capital moved its offices from Capital Drive to 888 Bestgate in 2014, months after the Annapolis-based newspaper was purchased by Baltimore Sun Media, a subsidiary of Tribune Publishing.

In response, James P. Ulwick, a Baltimore attorney representing The Sun and Tribune, argued in a motion that the company "wasn’t legally responsible for the criminal behavior of a third person."

The claims against The Sun and Tribune were dismissed with prejudice, meaning they cannot be brought back.