KYIV, Ukraine (AP) - Acknowledging "the real possibility of war," Vice President Kamala Harris wrapped up a weekend of outreach to European allies with a push to bolster the West’s resolve in confronting Moscow with crippling sanctions as increasingly dire signs suggest Russia's Vladimir Putin plans to order an invasion of Ukraine.

In a burst of diplomacy at the annual Munich Security Conference, Harris tried to make the case to American allies that rapidly escalating tensions on the Ukraine-Russian border meant European security was under "direct threat" and there should be unified support for economic penalties if the Kremlin invades its neighbor.

"We’re talking about the potential for war in Europe. I mean, let’s really take a moment to understand the significance of what we’re talking about," Harris told reporters before her return to Washington on Sunday evening. Europe, she said, might be at its most perilous moment since the end of World War II.

RELATED: What's happening between Russia and Ukraine? Things to know as tension grinds on

"It's been over 70 years, and through those 70 years ... there has been peace and security," she said. "We are talking about the real possibility of war in Europe."

President Joe Biden met with his national security team later Sunday in Washington to discuss the unfolding developments. Harris participated while flying back from Germany. Before leaving Munich, Harris and her team briefed them about her meetings and exchanges at the conference. 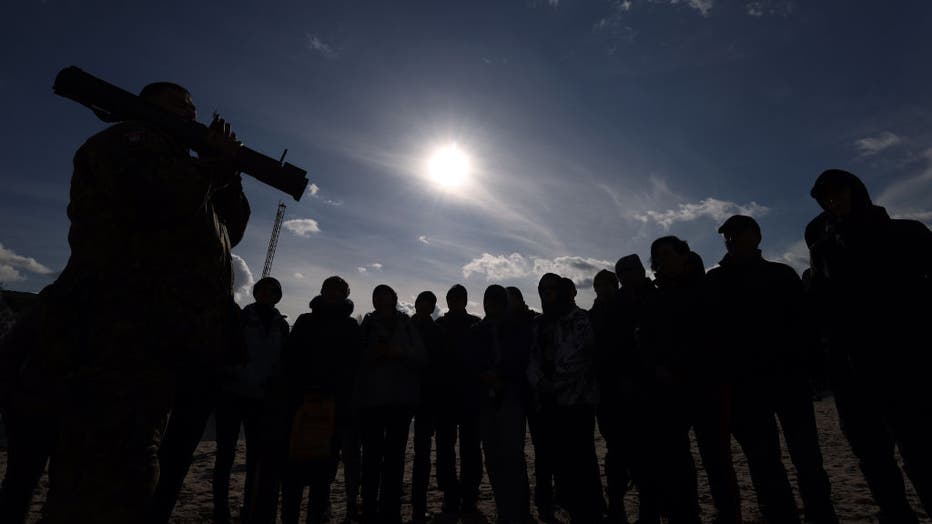 Ukrainian civilians with all ages receive military training at Dolobetsky island to defend their country in Kiev, Ukraine on February 20, 2022. (Photo by Ali Atmaca/Anadolu Agency via Getty Images)

Biden is scheduled to hold a virtual meeting with Group of Seven leaders on Thursday to discuss Ukraine, and his top diplomat, Secretary of State Antony Blinken, intends to meet in Europe with Russian Foreign Minister Sergey Lavrov this coming week — talks that the American says will be scrapped if Moscow has invaded.

In Ukraine, shelling on Sunday escalated in and around territory held by Russia-backed rebels, separatists evacuated thousands of women and children and Putin oversaw tests of nuclear-capable missiles. Putin has massed more than 150,000 Russia forces at the border.

During a series of choreographed meetings and a major address at the security conference, Harris told global leaders they were at a "defining" and "decisive" moment for the world.

Biden sent Harris to Germany with straightforward marching orders to amplify his concern that a Russian invasion was highly likely and make clear to European allies that they must be ready to impose the toughest sanctions Moscow has ever seen.

Harris told reporters that an invasion — and subsequent sanctions on Russia — would likely have costs for Americans, as well.

"When America stands for principles, and all of the things that we hold dear, it requires sometimes for us to put ourselves out there in a way that maybe we will incur some cost," Harris said. "In this situation, that may relate to energy costs."

The vice president's appearance in Munich was largely overshadowed by Biden’s declaration from the White House late Friday that he was "convinced" that Putin had decided to invade. And her message of unity in Europe in the face of Russian aggression was overtaken by Zelenskyy. Soon after meeting with Harris on Saturday, he used his appearance at the conference to question why the U.S. and Europe were waiting to impose sanctions against Russia.

"What are you waiting for?" Zelenskyy asked of Western leaders. He said the sanctions that targeted Russia after Ukraine’s economy collapses and "parts of our country will be occupied" would provide little comfort.

Harris said she wouldn’t "second guess" Zelenskyy’s "desires for his country" and she stood by the U.S. decision to hold off on preemptive sanctions. "The purpose of the sanctions has always been and continues to be deterrence," she said.

Blinken also told NBC's "Meet the Press" that "as soon as you trigger the sanctions, of course, any deterrent effect they may have is gone, they get absorbed by President Putin and he moves on."

Zelenskyy also repeated Ukraine’s desire to join the NATO even as Putin demands guarantees from the U.S. and the alliance of that not ever happening.

Harris, meantime, heard pleas to increase U.S. troop levels from Baltic leaders who worry their countries could be the next ones that Russia sets its eyes on.

Lithuania's president, Gitanas Nauseda, urged the U.S., which has bolstered its troops presence in the Baltics in recent weeks, to do even more and create a "permanent presence" in Lithuania. Currently, the U.S. deploys a small contingent of troops to the country on a rotational basis.

Estonia's prime minister, Kaja Kallas, echoed that call. "We have lost our independence to Russia once, and we don’t want it to happen again," she said.

Harris offered no promises, though she predicted in her address at the conference that the U.S. "will further reinforce our NATO Allies on the eastern flank" if Russia invades Ukraine.