ISTANBUL (AP) - A bomb rocked a bustling pedestrian avenue in the heart of Istanbul on Sunday, killing six people, wounding several dozen and leaving panicked people to flee the fiery blast or huddle in cafes and shops.

Emergency vehicles rushed to the scene on Istiklal Avenue, a popular thoroughfare lined with shops and restaurants that leads to the iconic Taksim Square. In one video posted online, a loud bang could be heard and a flash seen as pedestrians turned and ran away.

Turkish President Recep Tayyip Erdogan called the blast a "treacherous attack" and said its perpetrators would be punished. He did not say who was behind the attack but said it had the "smell of terror" without offering details and also adding that was not certain yet.

Sunday’s explosion was a shocking reminder of the anxiety and safety concerns that stalked the Turkish population during years when such attacks were common. The country was hit by a string of bombings between 2015 and 2017, some by the Islamic State group, others by Kurdish militants who seek increased autonomy or independence.

In recent years, Erdogan has led a broad crackdown on the militants as well as on Kurdish lawmakers and activists. Amid skyrocketing inflation and other economic troubles, Erdogan’s anti-terrorism campaign is a key rallying point for him ahead of presidential and parliamentary elections next year. 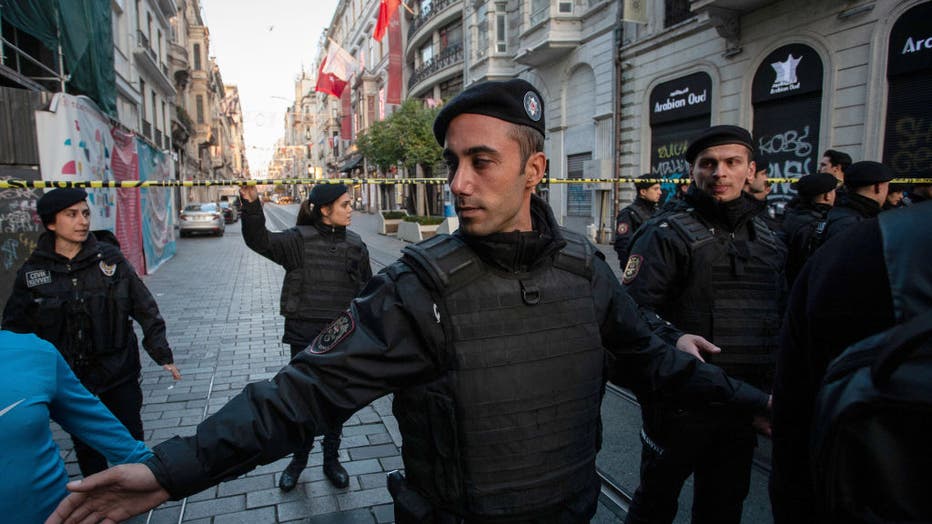 ISTANBUL, TURKEY - NOVEMBER 13: Police officers secure the area after an explosion on busy pedestrian Istiklal street on November 13, 2022 in Istanbul, Turkey. At least six people have died and at least fifty five injured, according to the city’s gov

Erdogan, who left Sunday for the Group of 20 summit in Indonesia, said six people were killed. Vice President Fuat Oktay put the wounded toll to 81, with two in serious condition, and also said it appeared to be a terrorist attack.

Justice Minister Bekir Bozdag told pro-government broadcaster A Haber that investigators were focusing on a woman who sat on a bench by the scene of the blast for about 40 minutes. The explosion took place just minutes after she left. He said her identity was not yet clear, nor was it clear what group might be behind the attack.

A manager of a restaurant near where the bomb went off said he heard the explosion and saw people running. The dozens of customers inside his restaurant, including women and children, panicked and screamed.

The manager, who spoke on condition of anonymity because of the sensitivity of the situation, said he closed his restaurant’s shutters, fearing there might be another explosion, and tried to calm the customers down. After about 15 to 25 minutes inside, he saw police on the avenue and organized the customers and his staff to leave in small groups. 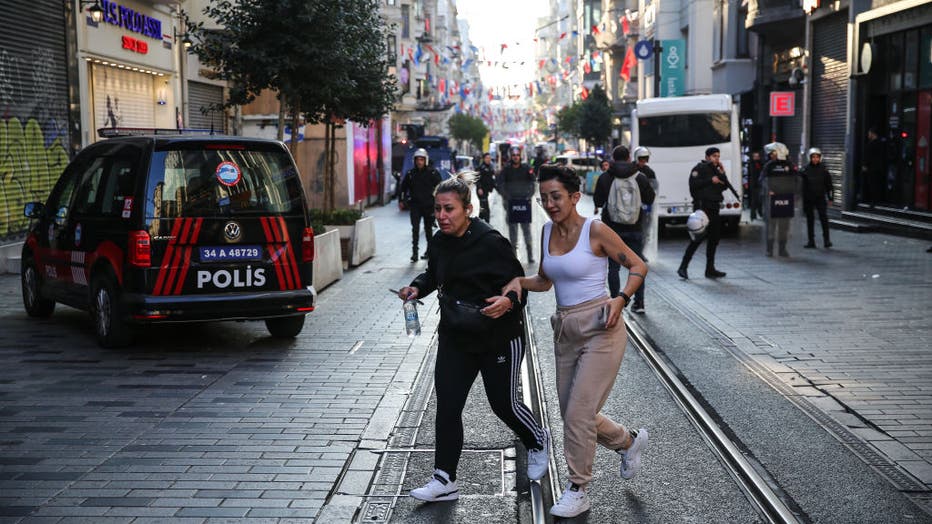 ISTANBUL, TURKEY - NOVEMBER 13: People flee the scene after an explosion occurred on Istiklal street, a busy pedestrian thoroughfare on November 13, 2022 in Istanbul, Turkey. It is unclear what caused the explosion that left at least six people dead

Numerous foreign governments offered their condolences, including neighboring Greece with which relations are tense. Prime Minister Kyriakos Mitsotakis said he was "shocked and saddened by the news of the heinous attack."

Following the attacks between 2015 and 2017 that left more than 500 civilians and security personnel dead, Turkey launched cross-border military operations into Syria and northern Iraq against Kurdish militants, while also cracking down on Kurdish politicians, journalists and activists at home.

RELATED: COVID-19 deaths down 90% since February, WHO says

While the Kurdish militants, known as the PKK, are considered a terrorist organization by Turkey, the United States and the European Union, critics say Erdogan has also used broad terror laws to stifle free speech.

Most recently, Turkey enacted a controversial " disinformation law " that carries a prison sentence of up to three years for social media users who disseminate false information about domestic or international security, public order or health. Critics have said the wording of the article is so vague, it can be used to stamp out dissent.

Police on Sunday said they had identified 25 social media users who shared "provocative content" that could fall afoul of that law.

In another example of the country's restrictions on the press, Turkey’s media watchdog also imposed temporary limits on reporting on Sunday's explosion — a move that bans the use of close-up videos and photos of the blast and its aftermath. The Supreme Council of Radio and Television has imposed similar bans in the past, following attacks and accidents.