In her own words: Ohio woman recalls crashing into 100-foot ravine

From her hospital room, Lexi LaPorte describes being trapped for nine hours before pulling herself free from the wreck.

An Ohio woman is recovering in the hospital after surviving being stuck inside her crashed car for nine hours that landed at the bottom of a nearly 100-foot ravine.

Lexi LaPorte, 21, was driving home through the town of Garrettsville on a rainy May day when her car hydroplaned.

The 2010 Chevy Cobalt hit the end of a guardrail and launched her car into the air, cutting down the tops of trees as it crashed into the ravine below.

"I was on my way home from a friend’s house and it was raining and I was like, five minutes from home," Lexi told FOX TV Stations from her hospital room in Cleveland, Ohio.

"I go off into the oncoming lane; I go off the road; I hit a street sign; I hit the tip of the guardrail and my car goes airborne," Lexi continued. 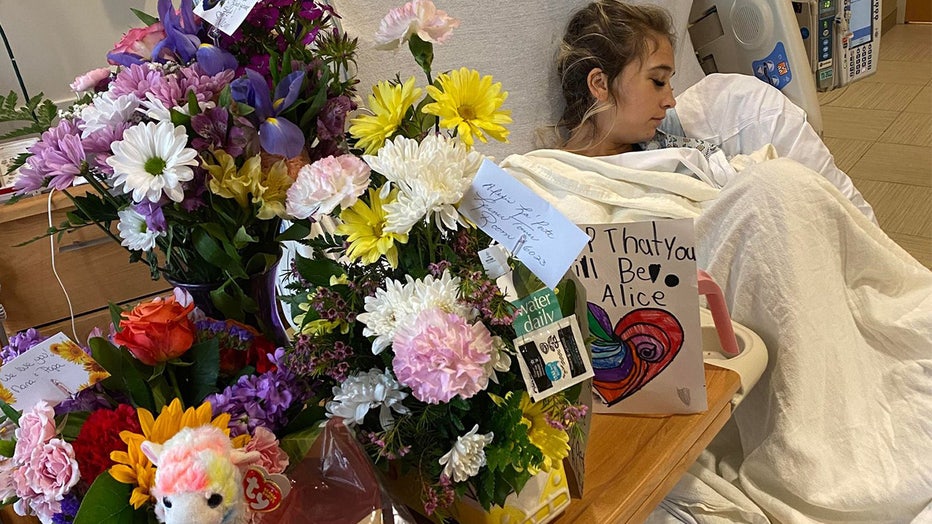 Lexi’s car had driven off what started off as a 20-foot embankment and her car rolled over several times and came to rest at the bottom of a ravine in a creek bed which was about 100 feet below.

Lexi said after her car crashed, she awoke to find her hand stuck between the door and the front driver’s side seat and the back half of her car submerged in water.

"I wake up, it’s dark. The only light that I had was my vape light," Lexi said with a chuckle. 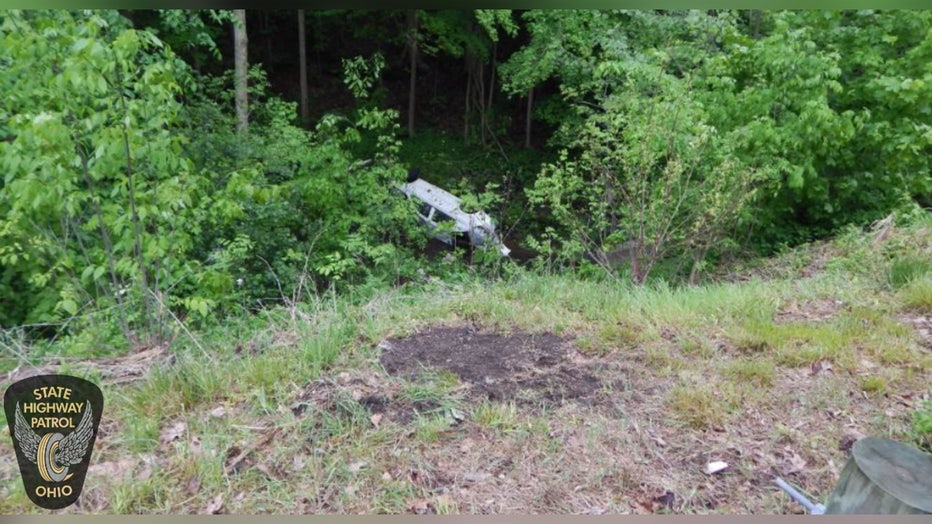 "My hand was stuck in between the door, my foot was broke, my leg was broke, my toes were cut off," Lexi said as she listed the injuries she could see in the darkness.

Her shoes were nowhere to be found, nor was her cellphone and even her seatbelt disappeared.

"I was in shock, like, I wasn’t really freaking out or anything. The adrenaline kicked in," Lexi said.

Lexi then quickly noticed her foot was bleeding badly. She frantically searched for something in her car that would remedy that and luckily was able to find a t-shirt inside her friend’s backpack which was in the backseat of her car.

Lexi fell in and out of consciousness from the sheer exhaustion she was feeling while trying to free her hand.

"After I don’t know, it was a long time. I was doing a bunch of things over the course of these nine hours, trying to just, survive, I guess," Lexi said.

Lexi noticed that her car’s front windshield was completely shattered and figured she could potentially kick a hole through for when/if she could get her hand free and escape from the car to get help. 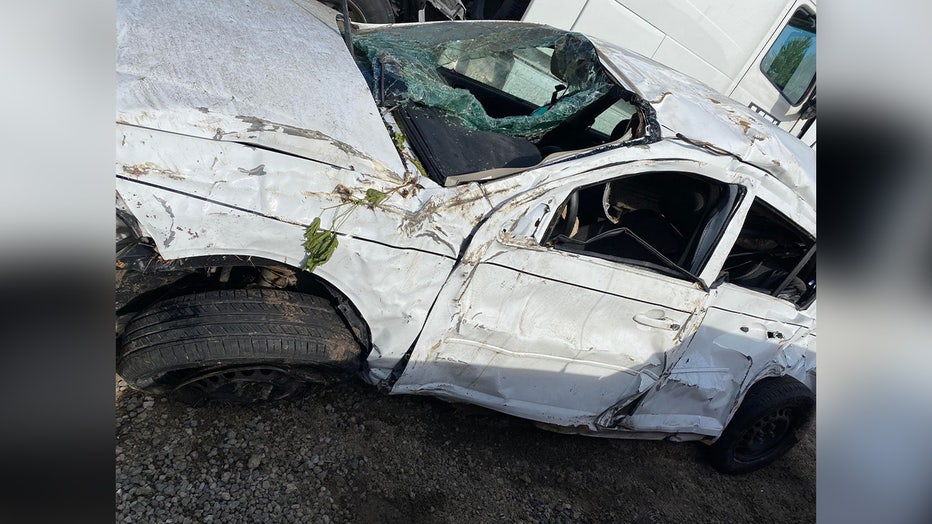 So, with only her socks on and using her unbroken leg, she started kicking as hard as she could. She successfully made a hole big enough to fit through, but she still had to get her hand unstuck.

She fell unconscious once again and said she either started to hallucinate or started having very vivid dreams.

"I was hallucinating, seeing a couple of my friends, my ex, and then my two other friends," Lexi said. She thought, whoever she saw, was going to go get her help.

"But, after I came to, or woke up or whatever, they’re not there anymore and I'm screaming for them like, 'Where did you guys go?! Hello?' screaming for them and I'm thinking to myself, 'OK, the ambulance is coming, someone's coming for me. I'm just going to take a little nap here,'" she continued. But after about an hour or so, she realized no one was coming to her rescue.

After what felt like an eternity, Lexi tried once more to free her hand and, to her surprise, she was able to pull it out after one last and hard yank.

Finally, Lexi was free. She was dehydrated, cold and hungry. 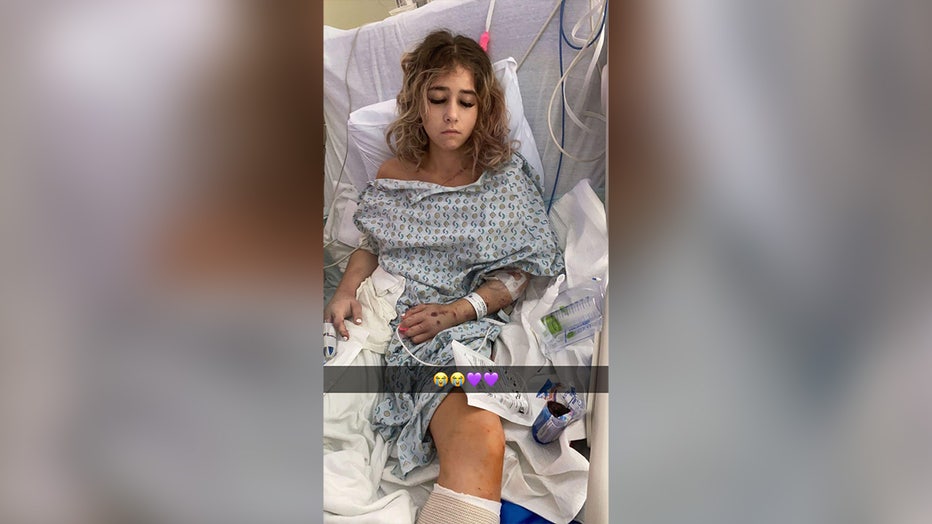 "After I got my hand free, I sat there for a second, looking at the water, like, do I want to put my broken feet in this water? I’m like, ‘I got to. What else am I going to do? I have to,’" she said.

Lexi managed to crawl out from the wreckage on her hands and knees and surveyed her surroundings. She was at the bottom of what appeared to be a nearly 100-foot-deep ravine and she would have to climb her way out if she wanted to get help.

So with a broken leg, missing toes, a broken finger and massive scrapes and bruises all over her arms and legs, she made the perilous climb using mostly one of her hands and her knees.

"I felt some sort of relief but not relief yet because no one still knew that I was down there," Lexi continued.

So finally managed to get out and onto the roadway.

A few cars drove by, ignoring Lexi’s pleas for help as she attempted to flag each one down.

"I’m like, please help me. But down the road, I see this guy, he’s outside by his truck. He’s packing up stuff up or something, and I’m like ‘Hello! Can you help me?!’ And I wasn’t yelling too loud, I didn’t want to freak him out. I could have screamed a lot louder, but I really didn’t want to freak him out because I know I looked scary," Lexi said.

Eventually, both the man loading up his truck and another bystander got Lexi help and managed to get a hold of her mother, Erin LaPorte, and police and EMTs were there in a matter of minutes.

Lexi’s harrowing journey was finally coming to an end.

The emergency room where Lexi was initially admitted did not have the resources to treat the severity of her injuries, so she was life-flighted to a trauma center in Cleveland. There, doctors found that she had a partially punctured lung, a gash in her foot, she was missing her big and second toes, she had a broken leg and scrapes and bruises all over her body.

Miraculously, Lexi had no brain damage, no internal injuries and her face and torso were basically untouched.

Lexi said that while she tends to be a clumsy person, she believed she had a fight or flight mentality following her accident which allowed her to survive for as long as she did and eventually get herself out of the ravine. 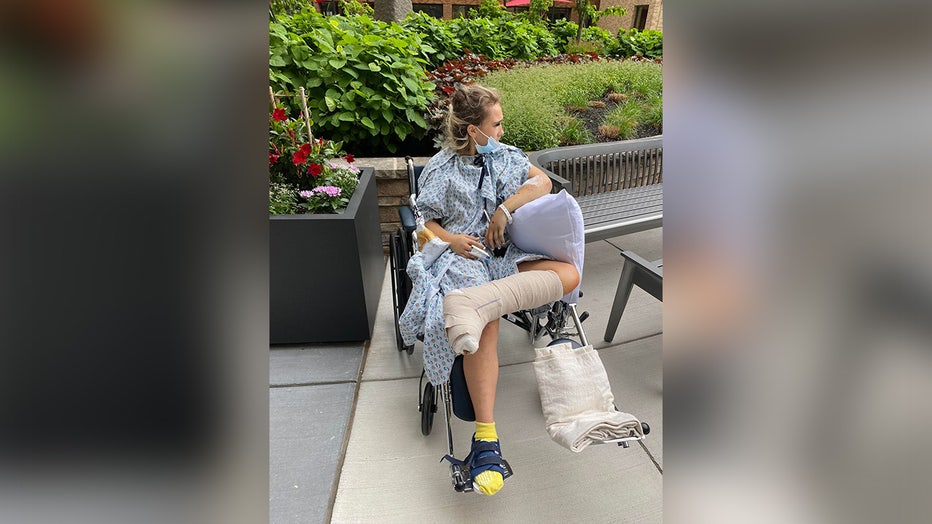 Lexi outside getting some fresh air. (Erin LaPorte)

"It’s absolutely crazy, what she went through. I’m so proud of her for being so brave and being able to problem-solve and figure out what she needed to do to get out of that situation and survive," Erin said and she sat next to Lexi.

Erin said she always encouraged her kids to figure things out on their own before asking for help and she is just thankful her daughter didn’t suffer worse injuries.

Lexi still has two surgeries scheduled and physical therapy but she is well on her way to a full recovery. Now, she’s looking forward to attending her younger brother’s high school graduation on June 5, pending any complications following her surgeries.

"She’s got surgery tomorrow. Depending on if they do everything tomorrow, then she’ll have to do a round of IV antibiotics and hopefully she’ll be let out Saturday or early Sunday morning because her brother graduates high school," Erin explained.

"I really want to see it. I’m mobile, I can hop," Lexi said as her mom chuckled.

While Lexi has lost her big toe and a part of her second toe, she and her mother agreed it was a small price to pay considering the severity of her accident. And what’s more, she’s eager to get back out and start driving around again, but maybe with a bit more caution next time.