Alleah Taylor speaks out following the arrest of then boyfriend Chad Wheeler, accused of brutally beating her.

SEATTLE - It's been four weeks since Alleah Taylor survived a vicious attack by former Seattle Seahawks lineman Chad Wheeler, and not a day goes by that she doesn't ask herself the same question: Why?

"I try to figure out why this happened. Why he'd do this? Why so brutal? Just a lot of whys," she said in an interview with Q13 News.

Wheeler was released from the Seahawks in January following his arrest on felony domestic violence charges. He's accused of attacking Taylor in her apartment during a "manic episode."

The assault was so severe, when responding officers asked Taylor if she thought she was going to die, she said, "I thought I already had."

Taylor said having her case thrust into the public eye has not been easy. But she said she feels lucky to have gotten out alive, and hopes her story will inspire others to do the same - before it’s too late.

Alleah is still healing from her injuries, including a scar on her neck.

"At first I was very sad seeing it, but now I look at it as a reminder that I survived," she said.

Taylor and Wheeler were together for six months, and things had been going well.

"I often think back like, what could've been done differently? But it was just so sudden," she recalled.

According to police reports, on Jan. 22, Wheeler cut off his long hair, which seemed strange to Taylor. Later that night, he came to her Kent apartment, where things quickly took a turn. 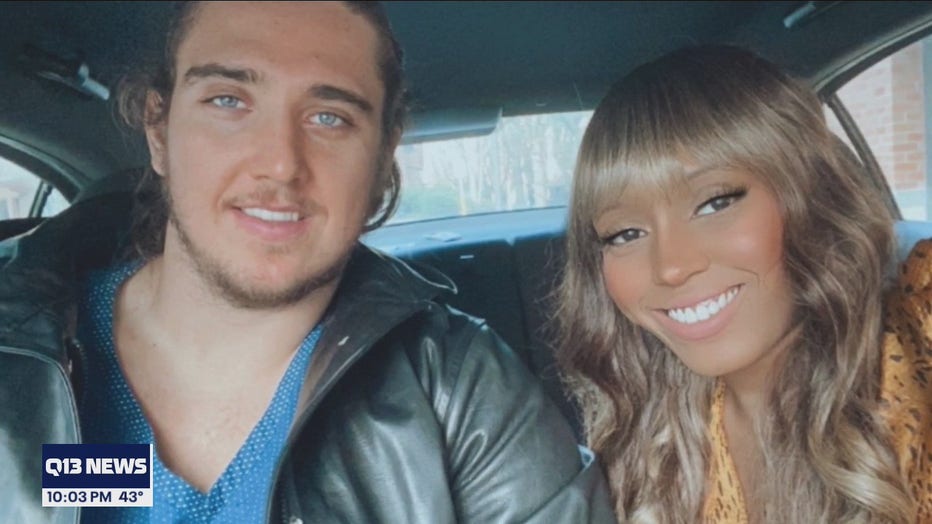 "He asked me to bow down and I asked him why, and I was backing up and he was getting closer and told me to bow down again, and I started crying because I realized he was serious and it scared me a lot," she said.

Without any provocation, she said Wheeler began attacking her.

"He sat on top of me and was strangling me with both hands and then put his hand over my mouth to try to cover my mouth and my nose, and he stuffed his fingers down my throat," she said.

Taylor blacked out. When she came to, she said Wheeler began strangling her again until she lost consciousness a second time. Wheeler is 6'7" and 315 pounds.

"Looking up at him and seeing his face, he looked so determined, and it was terrifying. I’m very strong, and I’ve never felt hopeless before. But in the moment I just thought, 'This is it,'" she said.

When she came to a second time, Wheeler was finally off her, she said.

"He was standing by the bed, by the door, and it was so chilling. He was like, ‘Wow you're still alive?'"

She was able to run and lock herself in the bathroom and quietly call 911. At this point she could hear on the other side of the door that Wheeler had begun eating the dinner Taylor had ordered them before the attack.

"He was very calm. I could hear his fork scraping, so I could tell he's still eating which terrified me, so I didn't think I had much time," she said.

When police arrived at the scene they could hear Taylor screaming for help. Her injuries were severe. She’d swallowed large amounts of blood, dislocated her elbow, broken her humerus bone and suffered a concussion.

After his arrest, Wheeler issued a public apology, also attributing the events to a manic episode. Taylor told police she knew Wheeler suffers from bipolar disorder.

Looking back, though, she's not sure if that explains what happened, she said. Once police showed up that night, Wheeler’s behavior suddenly changed, she said, and it was only then that he tried to check on her and began profusely apologizing to her.

"I had to realize my health is at risk, and I almost died. I have to put myself first. And I had to seriously think, could I be in a room with him by myself and feel safe?" she said.

The following week Taylor gathered the courage to face him in court. She was stunned when he asked the judge for permission to still go to Hawaii, a trip the pair were meant to go on together the day after the attack.

Taylor said it was hard to believe Wheeler was that concerned for her if he was still worrying about going on vacation.

"I had to contemplate that and come to terms that this may not be real love," she said.

With the legal process still in its early stages, Taylor said she feels lucky she was able to make a clean break from the relationship, something she knows can be very difficult for survivors in some situations.

But she still copes with the pain of being so hurt by someone you love.

"It is very confusing, especially because we haven’t talked, we haven’t had dialogue. So it just leaves you with the question: Why? Why did this happen? Why did you do this to me?"

Taylor has long journey of healing ahead of her, but she’s determined to come out of this a stronger person.

According to the state Department of Health, one in eight Washington adults has reported being injured by an intimate partner. It’s an issue that continues to plague Washington state, with numbers higher than ever during the pandemic.

If you or anyone you know is a victim of domestic violence, there is help for you. The national hotline for domestic violence has advocates available, ready to help, 24 hours a day. You can call or text 1-800-799-SAFE.

Loved ones of Alleah Taylor are raising money for her medical expenses, as well as funds to help her relocate. If you would like to donate, click here.