WASHINGTON - EXCLUSIVE: The top Republicans on the House Oversight Committee are demanding Chairwoman Carolyn Maloney to hold a hearing to examine the violence against supporters of President Trump after the “Million MAGA March” in Washington, D.C. last weekend.

They are also calling for answers from D.C. Mayor Muriel Bowser, claiming her “silence” on the issue is part of a “broader pattern of viewpoint discrimination.” 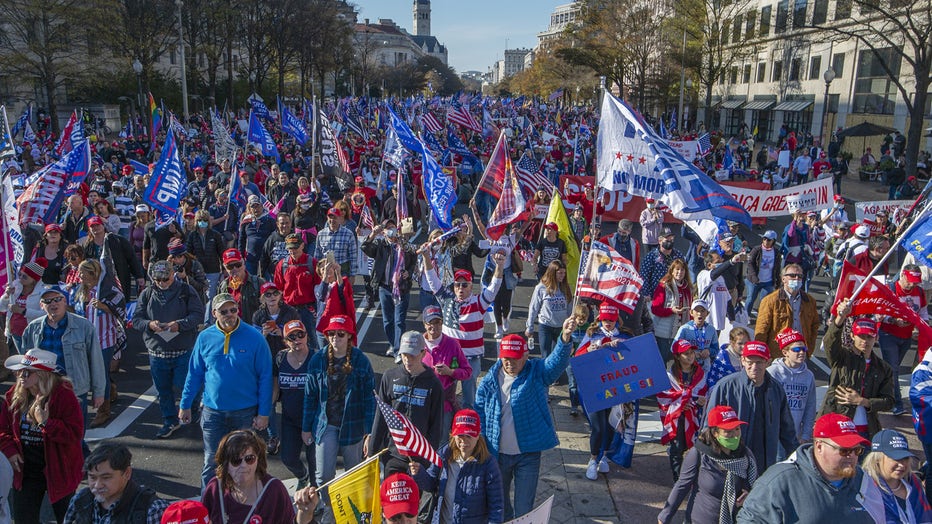 Thousands of supporters of President Trump march along Pennsylvania Avenue towards the Supreme Court during the Million MAGA March rally in Washington, DC, on November 14, 2020. (Photo by Craig Hudson for The Washington Post via Getty Images)

TRUMP SUPPORTERS HARASSED, ATTACKED AT MAGA MARCH IN DC AMID CLASHES WITH COUNTERPROTESTERS; ARRESTS MADE

“We respectfully request a hearing on the violence directed at supporters of President Trump on November 14, 2020,” they wrote to Maloney. “These supporters were exercising their First Amendment right to peacefully assemble within the District of Columbia.”

They added: “The failure of the city’s leaders to afford basic protections to persons who may hold different political viewpoints from their own appears to be another concerning example of viewpoint discrimination in the District.”

The pro-Trump march drew thousands of the president’s supporters to D.C. to back Trump as he contests the results of the 2020 presidential election and has yet to concede to President-elect Joe Biden.

In scenes captured on video, small groups of Trump supporters who attempted to enter the area around Black Lives Matter Plaza, about a block from the White House, were confronted by several hundred anti-Trump demonstrators who had gathered there.

Trump supporters who approached the area were harassed, doused with water, and saw their MAGA hats and pro-Trump flags snatched and burned, while counterprotesters cheered. Videos show anti-Trump demonstrators shouting at families, sucker-punching people in the street, and harassing an elderly woman carrying a Trump flag.

Other videos show counterprotesters marching in the streets and tossing what appeared to be fireworks into an outdoor seating area of a restaurant while diners were seated.

“Despite the violence, the mainstream media and liberal establishment were quick to minimize the seriousness of the use of violence against Trump supporters by deriding them for failing to wear masks in the midst of the coronavirus pandemic, and asserting that they were infiltrated by ‘white nationalists, conspiracy theorists, and far right activists,’” they wrote.

Daily Caller contributor Matthew Miller shared what he described as an "all out brawl between Proud Boys and Antifa in the streets.”

The Proud Boys is a pro-Trump conservative group that has engaged counterprotesters in other cities, including at least once in New York City and at several demonstrations with Antifa members on the West Coast. One of the group's leaders was injured when he was stabbed during another protest in Washington during post-Election Day demonstrations.

While multiple police lines kept the two sides apart, the nighttime clashes with counterdemonstrators led to fistfights, at least one stabbing, and 21 arrests on Saturday night.

A variety of charges, including assault and weapons possession, were filed against those arrested, officials said. Two police officers were injured and several firearms were recovered by police.

“City leaders have remained silent on the violence,” they continued. “This growing level of violence directed at others for holding different views is simply unacceptable."

Meanwhile, in a separate letter to D.C.'s mayor, Comer, House Judiciary Committee Ranking Member Jim Jordan, R-Ohio, Hice, Roy, and Rep. Mike Johnson, R-La., requested information on how her office plans to work with city police to “ensure the safety of those who seek to peacefully exercise First Amendment rights within the District.”

“These brazen attacks are part of a continuing trend against leftist agitators perpetrating acts of violence against individuals in the District under your watch,” they wrote. “The right to peacefully assemble in our nation’s capital under the First Amendment is paramount.”They added: “This is true regardless of who is doing the protesting or the popularity or unpopularity of their cause.”

The lawmakers slammed Bowser, saying her “silence” following the violence against Trump supporters “suggests you apply these principles only for those who share your same political opinions.”

“This is a dangerous precedent,” they wrote, criticizing her for her “silence” on the matter, and called it a “part of a broader pattern of viewpoint discrimination” on the part of the city.

Comer, Hice and Roy noted that over the summer, Bowser “allowed protesters to paint ‘Defund the Police’ on a city street in June where it remained until August, yet MPD officers arrested pro-life protesters for writing messages on a sidewalk in chalk.”

They also noted that they requested information from Bowser’s office in August, but said she “failed to respond and explain by the two groups were treated differently.”

“The violence of November 14 is disturbing, and it is clear that the District must act to ensure it is never repeated,” they wrote, claiming that D.C. leaders have “consistently failed to meet” basic protections against violence for “any group exercising their right to peacefully assemble—no matter their viewpoints.”

The Republicans demanded answers from Bowser’s office as to how she plans to work with the city police to protect all groups exercising their rights to freedom of expression and speech.

Over the weekend, the president weighed in on the violence and lashed out against "ANTIFA SCUM" and the media on Twitter, blasting counterprotesters as "Human Radical Left garbage.”

The president also slammed Bowser, claiming she was not "doing her job," and urged the city's police force to "get going – do your job and don't hold back!!”