The shooting at Cesar Chavez High School in Phoenix reportedly happened following a fight over a ghost gun purchase. FOX 10's Stephanie Bennett has more on what ghost guns are, and why law enforcement officials believe they are a treat to public safety.

PHOENIX - In the aftermath of a shooting at Phoenix's Cesar Chavez High School that left one student injured, some are focusing their attention on so-called ‘ghost guns.'

Related: 2 teens, including victim, may face charges in Cesar Chavez High School shooting, according to police

According to Phoenix Police officials, the shooting happened after a transaction involving a gun.

The gun at the center of the transaction was referred to by Sgt. Justice as a ‘poly-type gun,' or a ghost gun.

It is a gun that people can build. They can order the parts off the internet. There's different ways they can obtain those," said Sgt. Justus.

For a few hundred dollars, tools, and a lot of time, people can make their very own gun from the comfort of their home.

"A ghost gun is going to be very similar to what you see here. It's going to be essentially a piece of plastic that is starting to take this shape of a firearm, but it's not. It's not complete," said Ammo AZ LLC owner Veerachart Murphy.

While it is illegal to buy a completely assembled ghost gun, it is legal to buy all the parts needed to make one, and the parts can be obtained pretty easily: online, 3D print, or even purchase in stores like Murphy's.

"It's fairly easy to buy it, yes. It's very difficult to make it, and I should say make it correctly," said Murphy.

If someone decides to sell a handmade ghost gun, they have to mark it with a serial number. In addition, most places won't sell ghost gun parts to people under the age of 18.

There are no serial numbers on ghost guns

Murphy says a ghost gun does not have a serial number, because it comes in parts. Therefore, the government cannot trace it, which is appealing to some people.

"I think the allure with ghost guns is you don't have that government oversight," said Murphy. "Uncle Sam doesn't know you have this, and that's absolutely legal to own and make, so long as you keep it and don't try to resell it." 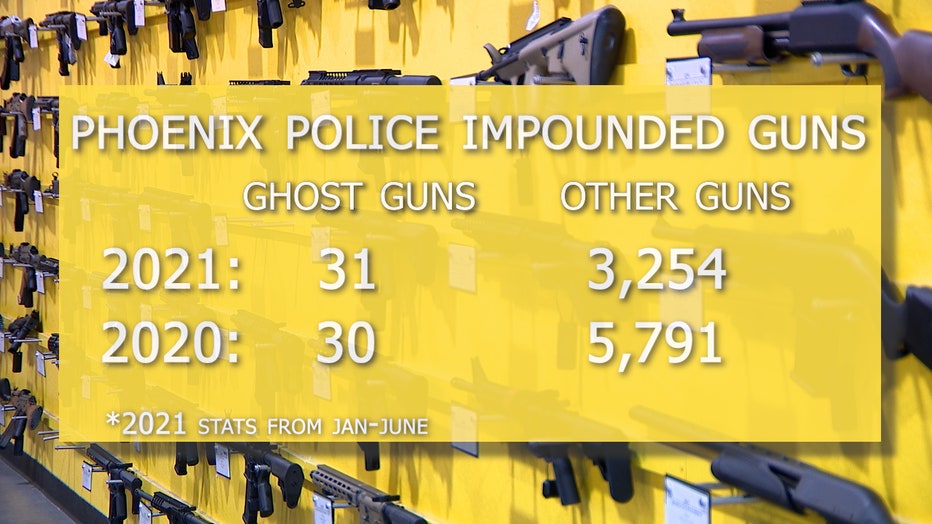 Law enforcement consider these homemade guns a threat, and the gun's popularity is rising. In 2020, Phoenix Police impounded 30 ghost guns. In the first six months of 2021, that number was already at 31, but those numbers are much less compared to other guns.

"So, what's concerning about these types of firearms to us is that there really is no quality control when they're being made. So, the safety. Also the fact that we don't know how many of them are out there. That's probably the most of concerning," said Sgt. Justus.