Armed militias at the polls

Are you concerned about militias and voter intimidation at the polls this election? Georgetown Law is arming people with knowledge about this after seeing more militias respond to events across the country.

FAIRFAX COUNTY, Va. (FOX 5 DC) - A couple of days after the polls opened in Fairfax County, Virginia, for early voting, residents were greeted by demonstrators – but many lawyers are concerned about a far more sinister welcome when dropping off their ballots for the 2020 election.

According to Georgetown Law’s Institute for Constitutional Advocacy (ICAP), voters are worried about encountering armed militias when they try to exercise their democratic rights.

This is not a Fairfax County or Virginia-specific issue. ICAP’s Legal Director tells FOX 5 they’ve been monitoring and receiving complaints from all across the country.

ICAP Legal Director Mary McCord told FOX 5 in a Zoom interview on Monday, more private or paramilitary groups having been showing-up in response to racial justice protests. And just last week, several men were charged after Federal authorities foiled a plot to kidnap Michigan’s governor. The suspects were reportedly connected to paramilitary groups.

The institute’s main message: “groups of armed individuals have no legal authority under federal or state law to show up at voting locations claiming to protect or patrol the polls.”

“They will purport to protect property and they have no authority to do so and so the concern we have is that they will also listen frankly to the president’s dog whistles about fraud in the elections and take it upon themselves to deploy near polling places ostensibly to protect against voter fraud but the reality would be intimidation of voters by that, the presence of such heavy weaponry,” McCord said.

McCord compared the activity to a citizen impersonating a police officer – which is illegal. She also noted this illegal activity is happening on “both sides.”

“Some of these unlawful militia groups are very extreme and plot terrorist attacks. Others are, you know, fancy themselves patriots. They still are unlawfully usurping the roll of legitimate law enforcement and they have no legitimate business in our, in our, you now democracy. But some actually are, you know, there are leftist groups as well. So it’s not really an ideological base thing,” McCord added. 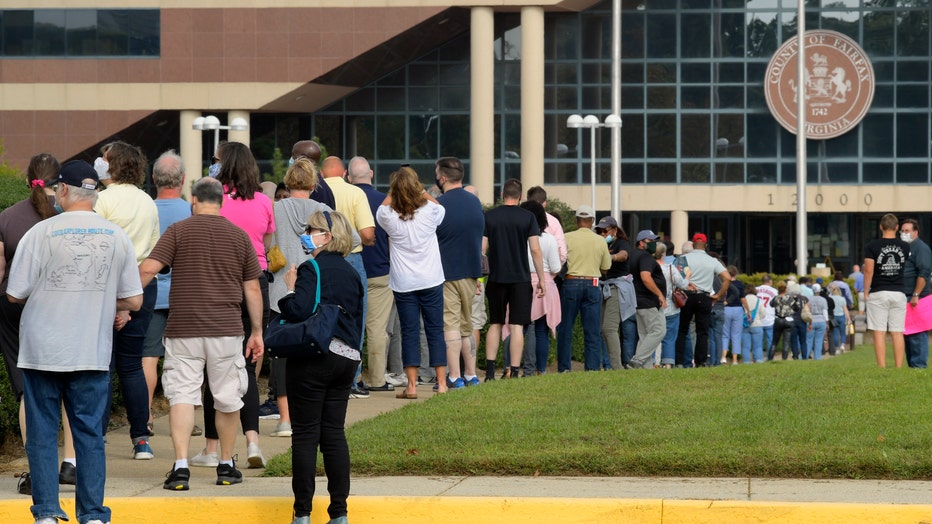 A fact sheet on ICAP’s website breaks down the laws around militias state-by-state.

The checklist, she says, provides information on how to document activity should a voter see armed militia members at the polls. FOX 5 is told this information is particularly important for police and prosecutors.

Some questions on the checklist include: “What are the armed people doing?” “Are people turning away from the polling station after seeing or speaking with them?”

ICAP does not want people to be scared of voting in person. They’re trying to provide as much information beforehand as possible.

FOX 5 talked to a number of police departments and sheriff’s offices in the D.C. area – and they all want voters to report any illegal activity they see at the polls.

FOX 5's Stephanie Ramirez reached out to most of our area’s local law enforcement department asking the following questions:

1. Can you tell us how many militia groups are operating in your jurisdiction that your department is aware of?

2. Is your department currently monitoring those groups or in communication with those groups regarding election activity?

3. Does your jurisdiction allow armed individuals outside of polling locations? What if they’re on a public street in an area where open carry is allowed?

4. What is your department’s guidance to any voter who may witness a militia group present at a polling location in your jurisdiction?

Three departments responded, including Loudoun, Arlington and Fairfax counties. Here's what they said:

There are no known militia groups operating in Loudoun County.

Does your jurisdiction allow armed individuals outside of polling locations? What if they’re on a public street in an area where open carry is allowed?

You can find information regarding this question here: https://law.lis.virginia.gov/vacode/title24.2/chapter6/section24.2-604/ but specific questions for each polling location (as they can vary based on location such as schools) can be directed to the Loudoun registrar’s office.

Any resident who has any concerns regarding illegal activity at a polling location is asked to contact the LCSO by calling 703-777-1021 or dial 911.

The Arlington County Police Department (ACPD) is committed to protecting the Constitutional right to vote while ensuring the safety of those participating in the election process. Early voting is underway in Arlington County and there have been no reported incidents at the polling location. ACPD remains in contact with election officials and is prepared to respond to any reported incidents in the County. Additionally, ACPD works with our regional law enforcement partners at the local, state and national levels on information sharing concerning any threats to the safety of the public. There are no known threats in Arlington County at this time. To ensure public safety through the election, police are conducting extra checks around polling places. To balance the safety of voters with their privacy, officers will not be stationed at polling places. If members of the public observe suspicious activity in Arlington County, they are encouraged to report information to the Emergency Communications Center for police investigation by calling 703-558-2222 or 9-1-1 in an emergency.

Arlington County recently adopted a firearms ordinance. The County is in the process of determining which, if any, locations would receive signage. Arlington County Code 13-14 states :

Guidance to voters –– for any suspicious activity, we urge them to call police to assess the situation. In an emergency, they can call 911 or send a text to 911 if discretion is needed.  *details below)

• Text in simple words — no photos, videos, abbreviations or slang.

• The first text should be short to include the location of the emergency and who you need: police, fire or ambulance.

• Be as specific as possible when providing your location. Provide as much of the following information as possible:

• Exact address to include unit/apartment number and city

• The names of both streets at the nearest intersection