The owners of a small, West African restaurant are telling customers to check with their business first before ordering dinner online.

FREDERICK COUNTY, Md. (FOX 5 DC) - The owners of a small Frederick restaurant claim they’re being scammed out of hundreds of dollars, unable to get an online ordering website to stop accepting payments from their customers. The website appears to be run by, “Orderhero,” a company whose name is synonymous with various “restaurant ordering scam” blog posts.

“That’s what really infuriated me, that people are making money out of our sweat,” said Amy Sackor, the niece of Le Mandingue African Restaurant and Grill’s two owners. The restaurant is a small, West African business that sits behind the Rita’s Italian Ice near W. Patrick and South Sts. in Frederick, MD.

Sackor says she did not learn about the scam until she quickly ordered food online from the family business on Thursday. The 30-year-old says when her mother arrived to pick up some $54-worth of food, her mother was told of the online conflict. Sackor tells FOX 5 she filed a claim with her bank to try and get the money back.

One of the owners tells FOX 5, her husband was approached by someone who offered to build a website for the restaurant in exchange for a small percentage of the online orders. There was an agreement made.

Orders began coming-in online, which reached the restaurant via fax machine. But when customers came to pick up the meals, the owners realized the payments for those orders were missing. They claim “Orderhero” is keeping those payments.

The owners tell FOX 5 they tried to call and sent several emails trying to stop the website from acting on their behalf. An email showed to FOX 5, dated in 2018, shows the owners asking about more than $322-worth of online orders payments allegedly missing. We’re told the owners were faced with two options: refuse to make the meals and lose customers, or make the meals without payment and lose money. 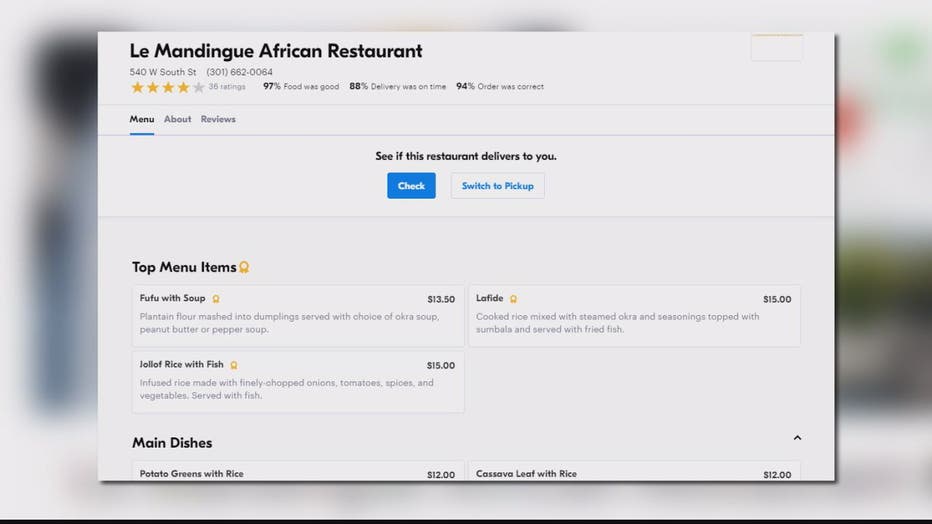 “It runs the reputation of the business because people think, ‘Oh wow, I go there, I’m going to their website, what looks like a legitimate website to place my order and I’m coming in to get my food and my food’s not here,’ So when people come in, they feel like maybe the business is scamming them, trying to take their money, but that’s not the case,” said Sackor, who also said, “I think they target like family restaurants, people who may not have that voice to go after them and people who may not have the finances to hire a lawyer to, you know, to really go after them.”

The Maryland Attorney General’s Office tells FOX 5 they have not received any complaints about “Oderhero” but do encourage customers who have a problem with a business to file a complaint with the AG’s office. You can find the information to do so here: http://onlinewww.marylandattorneygeneral.gov

Le Mandingue’s owners tells FOX 5 they plan to fire a report with the Frederick County Sheriff’s Office very soon. In the meantime, they’re only honoring Uber Eats and Grubhub. They’re also encouraging anyone who plans to order online, to call-in and check with the business first.