4th of July celebrations wrap up in DC

Thousands packed the National Mall Monday night for the July 4th fireworks. Area residents traveled a few miles, others came from far away to be in D.C.

Area residents traveled a few miles, others came from far away to be in D.C.

"We specifically made sure we were here for Fourth of July," said Melody Dickinson from Arizona.

Dickinson and her family got to the mall around 3 p.m., prepared, and unbothered by the heat.

From one July Fourth to the next, a look at how the year has changed

"I did look at the temperature at home, and it’s 100 right now, so this isn’t bad at all," Dickinson said.

Monica Penichet took the Metro over from Arlington with Miami visitors, sandwiches, chairs, and blankets in tow. 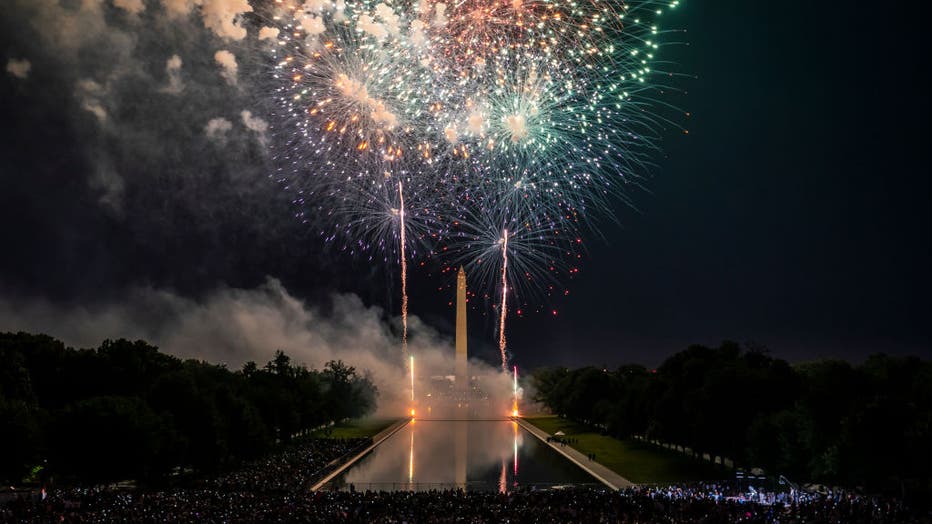 "We always come out here to celebrate the Fourth of July," Penichet said, "It’s just the ambiance and the vibes. We’re in D.C., we’re in the capitol celebrating America’s Birthday, and it just feels like the right place to be."

Part of the warning from D.C. officials was patience as people left after the fireworks.

Metro announced last week some people would have to wait up to 60 minutes after the fireworks to catch a ride.

Mayor Muriel Bowser and Metro officials urged people to not be in a rush to leave the mall, a message received by many.

This year all D.C. celebrations are back in-person after two years of COVID cancellations and virtual events. FOX 5’s Stephanie Ramirez reports live from the National Mall where people have been gathering all day.

Raymond Mann lives in Bethesda and instead of fighting crowds getting a train home, he delayed his commute back until Tuesday.

"We’re staying in a hotel, so we booked the hotel for tonight, so we don’t have to deal with the traffic. So we’re staying the night, and we’ll go home in the morning," Mann said.

The shooting at a July 4th parade in Highland Park, Illinois, front of mind for public safety Monday. Mayor Bowser and DC police issued a statement saying they were following developments in that shooting, and working across agencies to ensure Monday’s fireworks were safe.