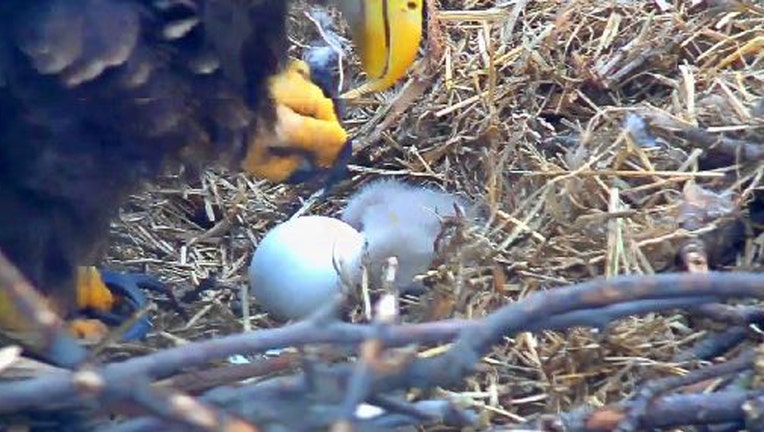 WASHINGTON - We are now awaiting the second of two eagle eggs to hatch after the first hatched early Saturday morning.

The first eaglet, temporarily named ECC3, hatched at around 7 a.m. Saturday morning, after a pip was spotted Friday morning in one of the eggs.

We are now awaiting ECC4 to hatch. That egg was laid on Feb 11. It can take the eaglet up to 48 hours to break through the thin eggshell once it is ready to hatch.

The eagles have been nesting in an oak tree at the police academy in Southeast D.C. since 2004. They have been laying one to two eggs every year here ever since.

Last year, an eaglet named Spirit hatched in mid-March after Liberty and Justice laid two eggs at their nest. Unfortunately, the second egg was non-viable and did not hatch.

The Earth Conservation Corps has set up a live web camera placed in Liberty and Justice's nest that is about 110 feet in the air. You can watch them on EagleCam.org or in the video player below:

Since 1994, the Earth Conservation Corps has been working to bring bald eagles back to Washington D.C. after the birds had not been spotted in the city since 1946.

For more information about the organization, go to EarthConservationCorps.org.