Officials are investigating after a Reston church was vandalized with graffiti referencing the recent overturning of Roe v. Wade.

Police say they were called to St. John Neumann Catholic Community Church on Lawyers Rd. at 6:45 a.m. Sunday after a call about smoldering mulch. They say fire crews determined that accelerant was used in the fire.

While there was no apparent fire damage Sunday afternoon, graffiti was visible on the church sign and at the back of the building. Someone spray-painted, "This won't stop," on the church sign, and "Seperation (sic) of church and state," on a back wall. 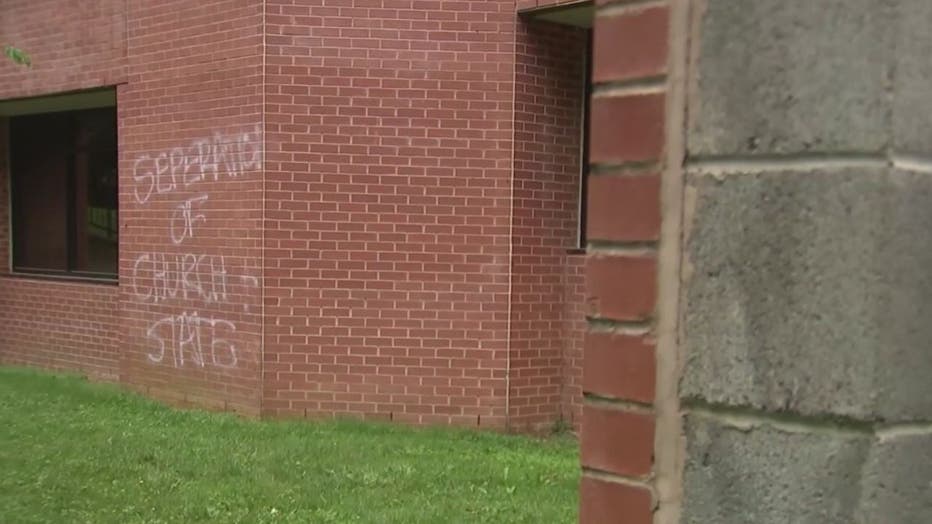 Other messages used profane language and there were also depictions of female genitalia.

Police said they are working with church staff to review surveillance footage. FOX 5 spoke to a church employee scrubbing the graffiti who directed us to others in the church for comment.

Karen Hobbs, a parishioner, said she has attended the church for twenty years and stopped by Sunday evening to say a prayer after her father passed away this week.

"This is upsetting to see this at my church," Hobbs said. "I don’t mind people expressing themselves, but I don’t think that they should do it in a way that’s vandalism."

It’s unclear why this church was targeted. The church website includes a message from Diocese of Arlington Bishop Michael Burbidge celebrating the overturning of Roe v. Wade, saying in part "We thank God for this welcome decision."

In response to that Gov. Glenn Youngkin tweeted: "There is no room for this in Virginia, breaking the law is unacceptable. This is not how we find common ground. Virginia State Police stands ready to support local law enforcement as they investigate."