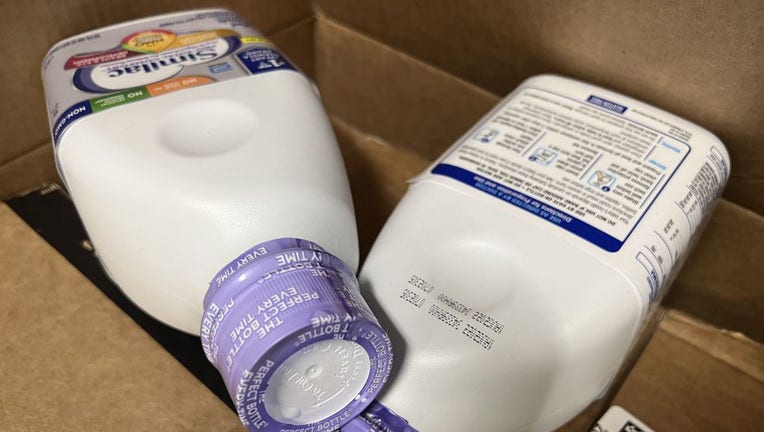 Bottles of Similac baby formula from Abbott Laboratories are visible in a shipment box, in Lafayette, California, May 13, 2022. Shortages of baby formula were reported in early 2022. (Smith Collection/Gado/Getty Images)

WASHINGTON - Abbott Laboratories is under investigation by the Food and Drug Administration (FDA) following a recent report of another baby’s death potentially connected to Abbott formula.

The baby died in January after consuming Abbott formula, and the FDA said in a release Wednesday they learned about the child’s death from a June 10 consumer complaint. The agency did not say which Abbott formula the child consumed or if it was connected to the Abbott Laboratories plant shutdown in February.

"The agency has initiated an investigation, given that the complaint referenced that the infant had consumed an Abbott product. However, the investigation of this most recent consumer complaint is in its preliminary stages and the agency will provide an update as it learns more," the FDA said in a statement.

According to the FDA, officials have reported complaints connected to nine infant deaths. Two of those deaths were linked to the Abbott Nutrition Sturgis plant investigation. But the agency did not definitively say whether or not there is a link between the infant deaths and the formula manufactured at Abbott Nutrition’s Sturgis plant in Michigan.

Approximately 129 complaints were reviewed involving the Abbott formula, the FDA shared. The agency explains that 119 of those complaints were reported after Abbott voluntarily recalled their formula products on Feb. 17.

Scott Stoffel, an Abbott spokesperson, provided a statement to FOX Television Stations Thursday saying there’s no evidence to suggest a connection between the formula and the incident.

"The FDA informed Abbott of this case last week, but there was limited product and clinical information provided to evaluate the case. At this time, there are no conclusions that can be drawn and no evidence to suggest a causal relationship between Abbott's formulas and this reported case. If additional information is available, we will investigate further per our complaint handling process."

Abbott closed its Michigan factory in February after the FDA began investigating four bacterial infections among infants who consumed powdered formula from the plant. Abbott has maintained that its products aren't linked to infections involving different bacterial strains. FDA inspectors eventually uncovered a host of violations at the plant, including bacterial contamination, a leaky roof, and lax safety protocols.

The company initially restarted the factory on June 4 after the temporary closure. Abbott recalled several leading brands of formula then, including Similac. That squeezed supplies that had been strained by supply chain disruptions and stockpiling during COVID-19 shutdowns.

The ongoing formula shortage has been most dire for children with allergies, digestive problems and metabolic disorders who rely on specialty formulas.

Abbott is one of just four companies that produce about 90% of U.S. formula and the company has produced 8.7 million pounds of formula in June, or 95% of what it produced the month before the recall.