FAIRFAX COUNTY, Va. - New training materials for teachers in Fairfax County Public Schools shows students can change their name and pronoun on school documents without parental consent. The documents obtained by Fox News show slides instructing teachers to allow students to change their pronouns in class, on official records, and use locker rooms and bathrooms in line with their chosen gender.

"Students will receive diplomas and transcripts with both the legal and chosen name," according to one slide. "Parental permission is not required," is listed directly underneath the bullet. 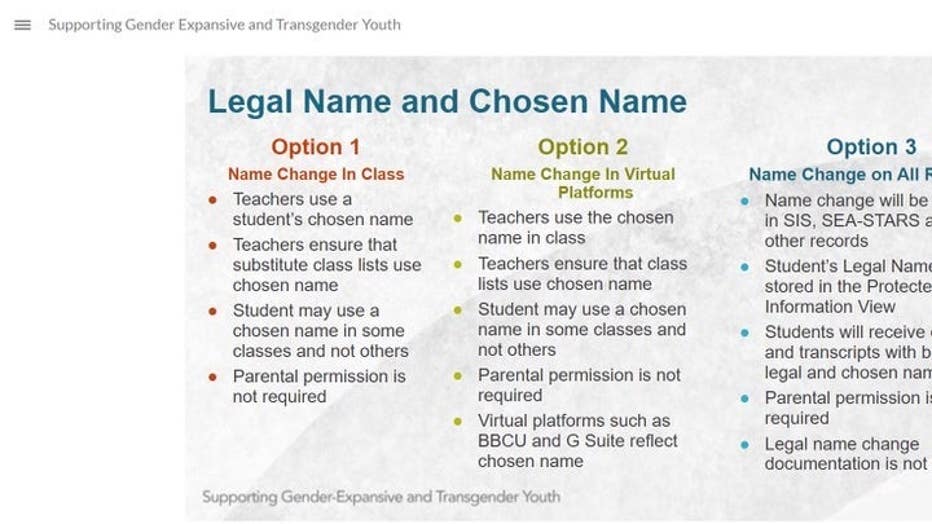 Parents say they once again feel they're being cut out of their children's academic life. Stephanie Lundquist-Arora, a mom of three boys in Fairfax County Public Schools and member of the conservative Independent Women's Forum, told Fox News that she feels her rights as a parent are being called into question on sensitive topics like gender identity.

"They are getting into areas that are parental rights areas and you should be able to have conversations with your children based on your own personal values, about what you think about gender identity or any kind of identity affirmation as it pertains to your children," said Lundquist-Arora. "And they're basically what we're seeing is public school is crossing into a jurisdiction where they don't belong in." 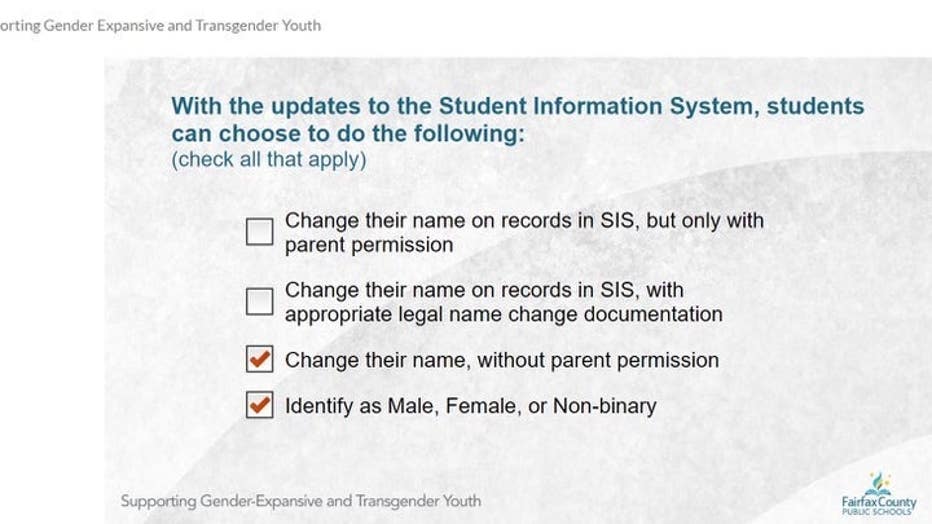 Other parents agree saying the training puts teachers in an uncomfortable spot isolating children from their parents and driving a wedge between them.

"You're having secretive behavior with kids and you're discussing highly sexualized content that breaches boundaries," said Chris Corbett, who has two students currently in FCPS.

He said that he's frustrated social issues continue to be the focus in the classroom while issues like staffing shortages and academic growth seems to be less of a priority.

"My daughter has been asked about her pronouns in every class that she's been to this first week,"Corbett said. "Yet they don't have teachers for some of the classrooms. So it's, you wonder where we're spending our energy and effort and resources on this type of work when we really should be focused on educating and hiring people."

Fairfax County Federation of Teachers said they were not familiar with the exact training materials, but said in a statement to Fox News, "...we encourage our members to engage in any training that will help them support students and honor students’ identities and needs with sensitivity."

Students in Fairfax County head back to class for the new school year.

Last spring, the Fairfax County School Board voted to make it possible for students as young as fourth grade to be suspended for "malicious misgendering" or "deadnaming" their peers, which parents say is an issue of compelled speech.

"We're wondering what's happening to the rule of law in these jurisdictions where school boards are doing that," Lunderquist-Arora said.

The latest gender controversy comes as FCPS also deals with the fallout of news that a former middle school guidance counselor remained on staff for nearly two years after being arrested for soliciting prostitution from a minor. Darren Thornton, who worked at Glasgow Middle School near Alexandria, was only fired after his second arrest for the same charge. Police attempts to notify the school were unsuccessful.

Virginia Attorney General Jason Miyares said his office is looking into the matter.