District leaders and federal partners are now working to get the inauguration perimeter up sooner than originally planned due to the yesterday’s FBI warnings of armed protests and potential gatherings in the District this weekend.

On Monday, the FBI warned of armed protests in all 50 capital cities and Washington D.C. An official in D.C. Mayor Muriel Bowser’s office tells FOX 5 they are concerned for this weekend and believe it is "prudent" to have security set-up before Saturday. Officials have not gone into detail yet about what intelligence they have on plans in the District this weekend.

Security measures ramp up in the District ahead of inauguration

FOX 5’s Bob Barnard reports from downtown Washington, D.C. as security measures ramp up in the District ahead of inauguration.

D.C. police shared what has been described as a "cryptic" tweet last night on street closures:

FOX 5 has not seen a map of the updated security perimeter yet. However, the Mayor’s office has warned it is expected to be even larger than inauguration’s past.

Once set-up, people may be screened inside. The screening may include questions on why you need to be in the perimeter. You may also be asked for ID.

Mayor Bowser is encouraging area residents to sign-up so they may receive Inauguration safety alerts:

The Mayor and Virginia Governor Ralph Northam thanked Virginia National Guard members on Tuesday for their presence on U.S. Capitol grounds to protect the inauguration event planned for next week.

The Pentagon, on Monday, approved the deployment of at least 10,000 National Guard members to the District by Saturday. For comparison, an Army spokesperson confirmed 7,922 soldiers and airmen were mobilized for the 2017 Inauguration of President Donald Trump. 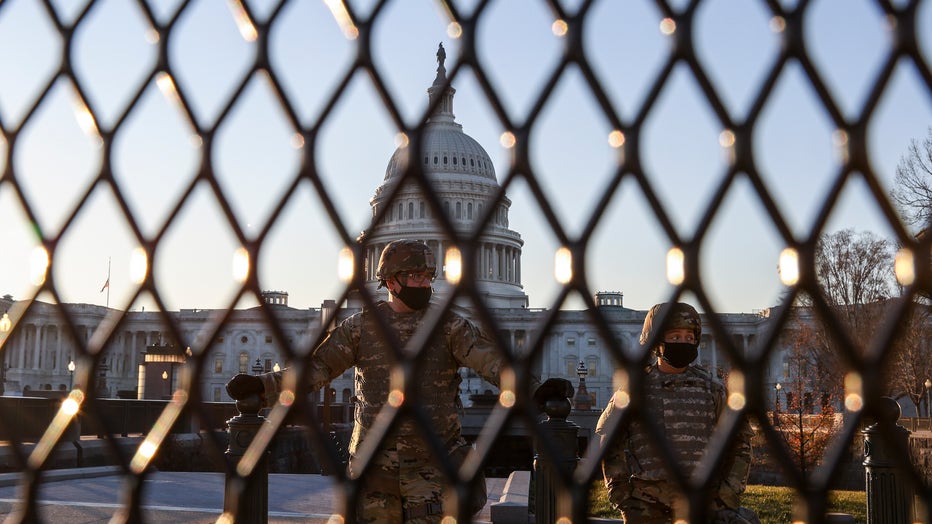 Governor Northam thanked his state’s Guard members saying, "I realize a lot of you are students, a lot of you have jobs, you have families. You had to leave them behind for the next month."

"We’re here to defend Democracy and makes sure that there’s a peaceful transition of power on January 20th," the Governor told FOX 5, after confirming he was aware of a report claiming a Virginia FBI office had warned some people headed to D.C. last week were planning to commit acts of violence and "war" -- one day before rioting broke out at the U.S. Capitol.

Mayor Bowser also thanked the guard members saying, "What’s going to happen in our Nation’s Capital next week is the peaceful transition of power. And your presence here will ensure that our lawmakers feel safe in the capital, but also all the beautiful, iconic buildings that make up our Mall and  Mall-area in the Nation’s Capital are also protected. I just want to share with you that the people of the District of Columbia are grateful [for you] to be here. And I know that Americans across all of ours states and our wonderful cities are also grateful for your service."

Airbnb announced it is banning rioters and those identified as hate group members ahead of the inauguration.

Mayor Bowser sent a letter to Homeland Security making a list of requests to further the federal-local partnership after last week’s rioting and federal response to that event.

A Mayor’s order released late Monday extended the temporary indoor dining ban until January 22nd to coincide with the requests to Homeland Security. Museum and the D.C. Circulator around the National Mall closures were also extended in this order.

When asked whether hotels would be closed for security reasons, Mayor Bowser told FOX 5 she has received questions from operators and will likely offer any guidance to those businesses later in the week.

To business owners, the Mayor’s office did not say they should board-up, but did say DC-area residents should be prepared with plans to keep themselves and their businesses safe.

Officials with the Department of Interior say they are still in talks with the Mayor to determine whether they will grant her request to cancel gathering permits through the 24th.

President Trump, late Monday, approved the Mayor’s pre-disaster declaration for the District. Officials previously said this would allow D.C. to better work with FEMA if need be.

Former acting Secretary of Homeland Security Chad Wolf authorized the National Special Security Event designation for the inauguration to begin earlier than originally planned: Wednesday. The Mayor requested it begins on Monday. It’s not clear with the NSSE period will end.

The Mayor is expected to hold a Wednesday news conference to provide more security details.