A D.C. man is accusing R. Kelly’s former crisis manager of theft after the former publicist scammed him out of thousands of dollars.

WASHINGTON - R. Kelly’s former crisis manager is now dealing with a crisis of his own.

A D.C. man is accusing Darrell Tracy Johnson of theft after the former publicist scammed him out of thousands of dollars.

FOX 5’s Jacqueline Matter spoke to the victim who says he’s lost $70,000 and is now left with nothing but empty promises after his neighbor offered to help him get his money back from a bad business dealing.

"It was like fear almost, like really? I'm in something that I never thought I would be in," Markell Johnson said.

Johnson is a 26-year-old up-and-coming restaurateur and businessman in the District.

He says he’s also the latest victim of Darrell Johnson — a crisis intervention manager and former publicist for R. Kelly and other A-list celebrities — who is accused of stealing millions of dollars from people across the country.

"He's my neighbor, like, how could he live with me and then scam me and still walk past me every day?" Darrell said.

Markell reached out to Darrell after a partner defaulted on a loan. 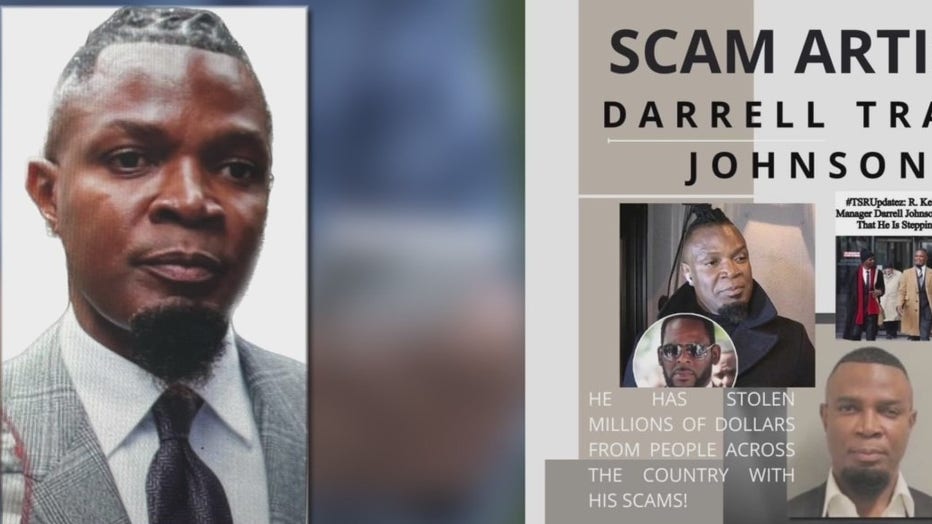 Markell says within days Darrell was asking him for money to pay for attorneys, debt collectors – even help from the U.S. Marshal’s Service.

Several months later and Markell is out more than $70,000.

"He promised me that he was going to be able to recoup, you know, this debt that was lost."

Now, Markell says he is grappling with ways to make ends meet.

"It's been burdensome to be in this struggling position," he said. "We're really, you know, down to the wire of like, can we do this? Can we not do this?"

"Then of course it bleeds into personal side of like we can't do things that we have maybe planned for my family because these funds came from everything," he continued.

Darrell is accused of similar accusations in Texas where he’s facing several theft and fraud charges.

Markell hopes by sharing his story others won’t fall victim to this scam artist.

"He's not going to stop. I'm hoping this brings the exposure to him. This is ongoing," Markell said.

As for Johnson, an attorney representing him in court says he turned himself in to authorities in Texas for a separate case there.