For decades, Darth Vader has kept an eye on the National Cathedral. Some say he chases evil spirits away.

WASHINGTON - Fans across the world celebrate today, May the fourth, as Star Wars day.

In Washington, D.C. you can visit one of the franchise's most popular characters at the National Cathedral.

"The cathedral is designed to tell two stories at once," said Kevin Eckstrom, a spokesperson for the church.

"One of faith and the other of the American people."

Part of that story is engrained in one of the 215 stained-glass windows that holds seven grams of lunar rock donated by the Apollo 11 crew.

"One of the few places you can actually see a piece of the moon that’s not in some government lab or facility somewhere," Eckstrom said.

There's another feature that draws visitors even closer to the "dark side."

"This is as close to Darth Vader as you can get," Eckstrom explained.

High up on the northwest tower of the cathedral there is a Darth Vader gargoyle.

You may be wondering how he got there.

It started with a kids' design competition in the midst of the 80s space craze.

"The idea was that everyone has something to contribute, and we wanted to see what people would come up with when they could design their own gargoyle," Eckstrom said. "Now I don’t think we were planning on Darth Vader." 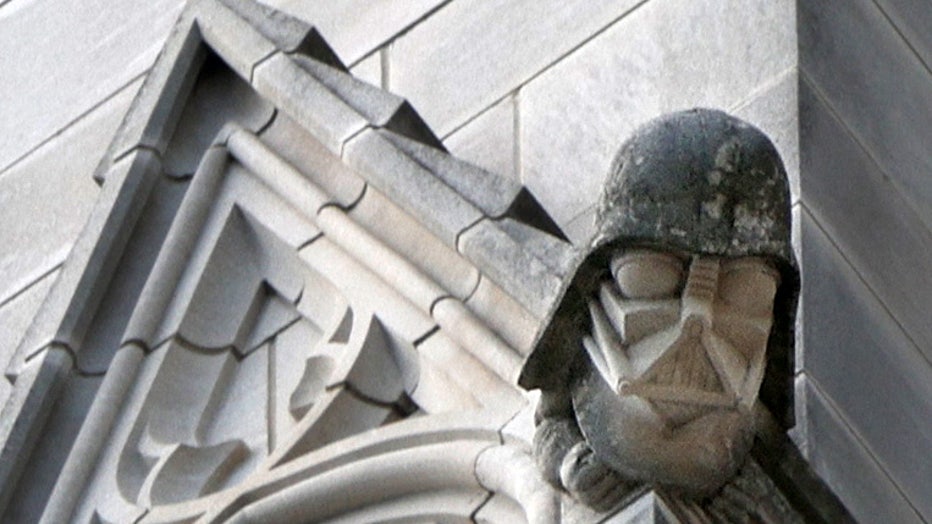 WASHINGTON, DC - AUGUST 19: A grotesque of Darth Vader from the movie Star Wars is seen on a pinnacle of the National Cathedral during a press tour August 19, 2021 in Washington, DC. A magnitude 5.8 earthquake hit the Piedmont region in the neighbori

A 13-year-old drew up Darth Vader. His artwork turned into stone.

Eckstom said, "He is easily one of the most popular parts of the building."

Not exactly carbonite as is typical of Vader but decades later the villain’s force helps repair the National Cathedral.

"Any purpose of a grotesque or a carving is to help bounce rainwater off of the building, so yes he does have that function," Eckstrom said. "He’s not a gargoyle though. A gargoyle has a water pipe in his mouth, he does not."

"There are people who believe he chases away the evil spirits and keeps the cathedral safe, so we’ll go with that."

While pop culture and the space race have their place at the National Cathedral, it may be a while before a Jedi joins the force.

When asked whether the church has plans to add a Luke Skywalker statue, Eckstrom replied: "Darth Vader is ultimately a redemption story….so you never know. There aren’t any spots for new gargoyles that we have discovered yet."

Guided tower climbs to see Darth Vader aren’t taking place right now, but you can still get a good look from the ground.

The cathedral has instructions on how. May the 4th be with you!