Sal Capaccio is a Buffalo Bills beat and sideline reporter, and was at the game Monday, when Damar Hamlin collapsed. He joined LiveNOW from FOX's Josh Breslow to talk more about Hamlin's condition.

ORCHARD PARK, N.Y. - The Buffalo Bills kicked off an emotionally charged game against New England with an extraordinary, "storybook" play for Damar Hamlin, then clinched the AFC's second playoff seed with a 35-23 win.

Bills running back Nyheim Hines returned the opening kickoff 96 yards for a touchdown just 13 seconds into the game.

The Bills (13-3) closed their season by winning their final seven games and overcame an emotional week in which the team was left devastated in watching Hamlin collapse after going into cardiac arrest and having to be resuscitated on the field in Cincinnati on Monday night.

Hamlin, who's shown remarkable recovery, was watching the game from his hospital bed in Cincinnati. He tweeted a photo of himself and posted a second tweet when Hines scored.

Earlier this weekend, Hamlin posted on social media Saturday for the first time since his collapse, and he addressed his teammates on video Friday.

"Love you boys," he told them.

The Bills and their fans planned several tributes for Hamlin Sunday.

The owner of a sign shop, Ryan Magnuson, designed a 4-by-10-foot canvas card, which he erected at the foot of the Bills stadium entrance for all to see — and sign — as they arrived for Buffalo’s game.

Magnuson’s goal is to somehow get his oversized card sent to Hamlin.

Fans filled the front of the sign with well-wishes some three hours before kickoff, offering messages such as "Stay Strong" and "Love." Some wore No. 3 jerseys, which is Hamlin's number. 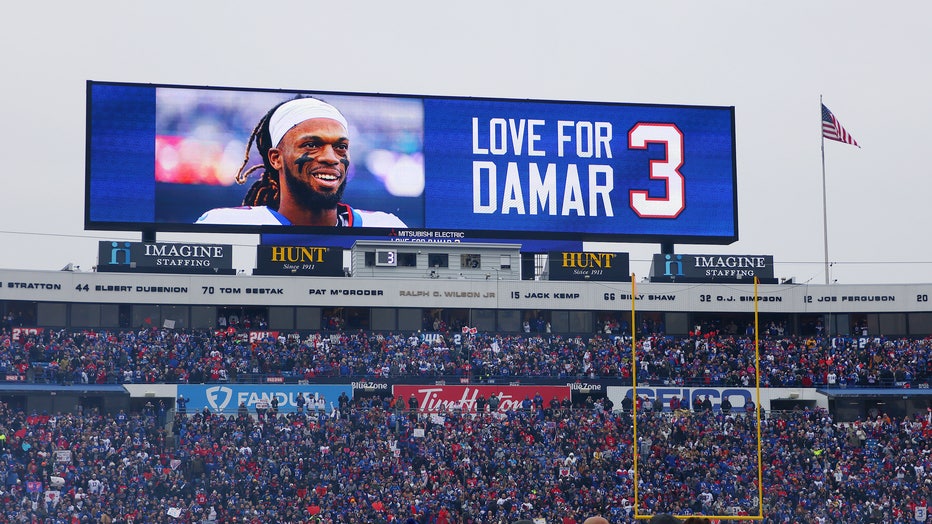 The scoreboard depicts a message of support for Damar Hamlin during the game between the New England Patriots and the Buffalo Bills at Highmark Stadium on January 08, 2023 in Orchard Park, New York. (Photo by Timothy T Ludwig/Getty Images)

"Watching it live, it was sad to see," said Kyle Blaney, wearing a Patriots jersey. "But it’s good to see everyone coming together to support him, not just Bills fans."

Players from both teams came out onto the field for warmups wearing shirts honoring Hamlin. Many Patriots players wore black sweatshirts with the words "Love for Damar" printed on the front. Several Bills players wore T-shirts with Hamlin’s likeness on the front and back.

An extended pregame ceremony began with the Bills medical and athletic training staff being introduced on the field to a roaring ovation. The Bills entered the stadium with numerous players carrying flags, which read "Pray for Damar 3." Fans held cardboard cutouts of the No. 3 and red hearts.

The sold-out crowd — many of them wearing No. 3 Hamlin shirts and jerseys, and holding up red hearts in the player’s honor — erupted as one as Josh Allen walked off the field with his hands raised after the game ended.

For Buffalo GM Brandon Beane, the game was far more than a showdown against an AFC East rival to close the season. Instead, it represents a celebration of life in knowing Hamlin is on the road to recovery.

"I probably get emotional if I talk too much about it, but I’m so proud of our organization, our team, just so many people, the way we’ve dealt with so much this year," Beane said. "Definitely not the way you draw it up. I don’t know what’s gonna happen the rest of season on the field, I really don’t. This is a group of winners, and I will forever remember this team, this season." 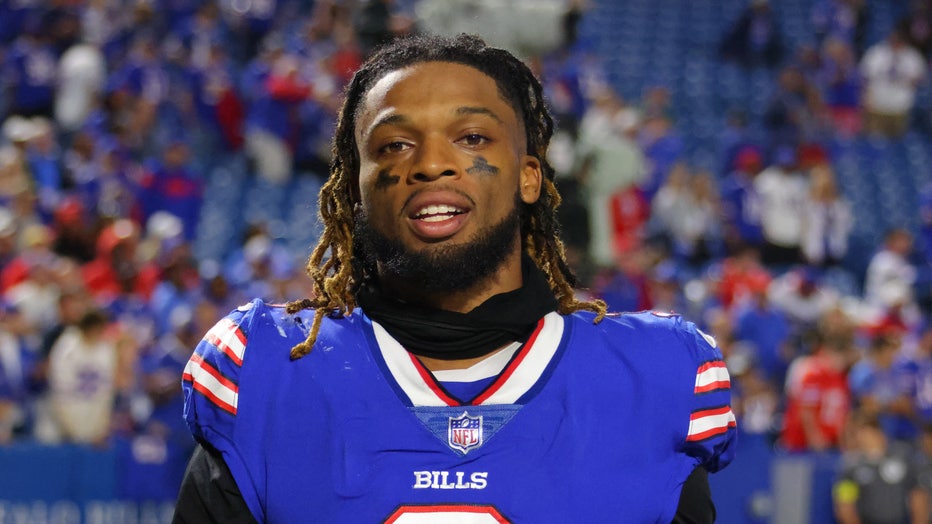 Damar Hamlin #3 of the Buffalo Bills after a game against the Tennessee Titans at Highmark Stadium on September 19, 2022 in Orchard Park, New York. (Photo by Timothy T Ludwig/Getty Images)

The NFL’s decision to cancel Buffalo’s game against Cincinnati pushed Kansas City (13-3) ahead of the Bills in the standings.

The one consolation is the league ruling the AFC championship game would be played at a neutral site should the Chiefs win the top seed and face Buffalo, should both teams win or lose on Sunday. 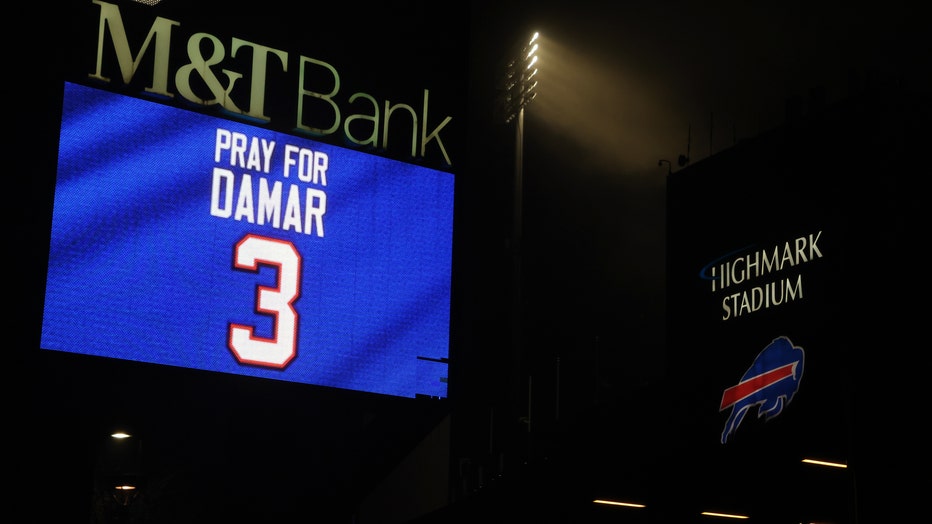