ATLANTA - The name of the man shot and killed by officers near the site of the controversial "Cop City" Atlanta Public Safety Training Center during a sweep on Wednesday has been released.

The Georgia Bureau of Investigation says 26-year-old Manuel Esteban Paez Teran opened fire on a Georgia State Patrol trooper during a "clearing operation." Investigators say he did not comply with commands by a joint task force and that he fired first. 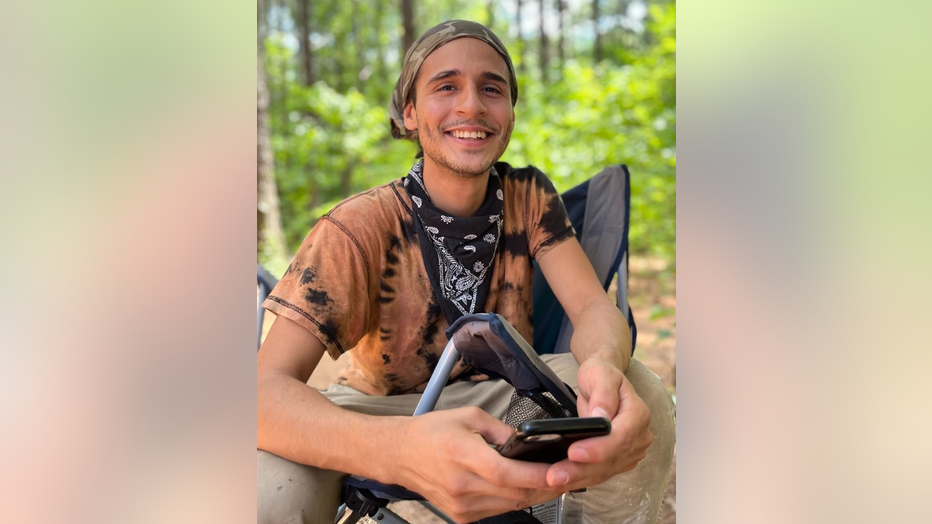 Investigators say they found a handgun and shell casing at the scene.

The injured trooper, whose name has not been released, was shot in the "pelvic-area" and he was wearing a bullet-proof vest. Fellow officers were able to pull him from the woods and medics rushed him to Grady Memorial Hospital. After emergency surgery Wednesday afternoon, he was moved to the ICU for recovery. Officials say he was in stable condition Thursday.

A Georgia State Patrol trooper was shot and a protestor killed during what the GBI director called a "clearing operation" at the controversial "Cop City," the future home of the Atlanta Police Department’s first responder training facility.

During their raid, the GBI says more than 25 campsites were found and removed. In those sites, investigators say mortar style fireworks, multiple edged weapons, pellet rifles, gas masks, and a blow torch were taken into evidence.

Geoffrey Parsons, 20, of Maryland, was arrested and charged with domestic terrorism and criminal trespass after a raid on the so-called "Cop City" Atlanta Police Department training facility on Jan. 18, 2023. (DeKalb County Sheriffs Office)

Geoffrey Parsons, 20, of Maryland, Spencer Bernard Liberto, 29, of Pennsylvania, Matthew Ernest Macar, 30, of Pennsylvania, Timothy Murphy, 25, of Maine, Christopher Reynolds, 31, of Ohio, Teresa Shen, 31, of New York, and Sarah Wasilewski, 35, of Pennsylvania were all arrested. All were charged with domestic terrorism and criminal trespass. They were booked into the DeKalb County Jail.

Investigators three other people were contacted, and after providing their names to authorities, were allowed to go free.

A Georgia State Patrol trooper was shot and a protestor killed during what the GBI director called a "clearing operation" at the controversial "Cop City," the future home of the Atlanta Police Department’s first responder training facility.

It was the same task force that made a similar sweep in December, making five arrests. All were charged with domestic terrorism. DeKalb County District Attorney Sherry Boston said at the time that people attacked firefighters and police officers with rocks and weapons as the officers removed barricades blocking some entrances to the site.

The Georgia Bureau of Investigation will be investigating the deadly use of force and will turn over its findings to the Georgia Attorney General’s Office and DeKalb County District Attorney’s Office, who are jointly prosecuting this case.

About a dozen protesters showed up outside of the DeKalb County Jail the day after seven people were arrested during a sweep of the so-called "Cop City," the future site of the Atlanta Public Safety Training Center. The GBI says a trooper was shot and the person who investigators say pulled the trigger was killed by law enforcement officers during that same task force operation.

The Atlanta Police Foundation, the major force behind the project, officially calls it the future Atlanta Public Safety Training Center, but for those who oppose it, it is called "Cop City."

According to the foundation, the city of Atlanta has owned an 380-acre tract of land since 1918 when it purchased it from DeKalb County for the purpose of building a prison farm for non-violent offenders. Prison buildings would be built, farm land would be plowed, and pasture land cleared. It remained in use until 1995.

Starting around the mid-1990s, the city began using the land for portions of their training, even housing temporary facilities until the current Public Safety Training Center was completed. The foundation says various portions of the land, to this day, continue to be used by police and firefighters training in weapons, fire fighting, and explosives detection.

A section of the land was also used as a burial site for animals from the Atlanta Zoo at one point, the foundation says. The current Metro Regional Youth Detention Center sits adjacent to the land on the south side off Constitution Road.

While there have been rumors possible human remains or artifacts on the land, the foundation points to an archeological and historic preservation study which found no trace.

The old prison farm land was not at the top of the list when the Atlanta Police Foundations was asked by the Atlanta Police Department and then-Mayor Shirley Franklin to begin outlining what a future training facility should look like. It was only when foundation members began to identify the various training needs, did the site emerge as being a viable location.

One of the biggest challenges was a versatile and dynamic location able to change and grow with the departments needs for the next half-century. Initially, designers were looking at developing 150 acres, but the Atlanta City Council asked them to scale it back to 85 acres. That has become the current plan.

The training center would include a shooting range, classrooms, a mock village, an emergency vehicle driving course, stables for police horses, and a "burn building" for firefighters to practice putting out fires. 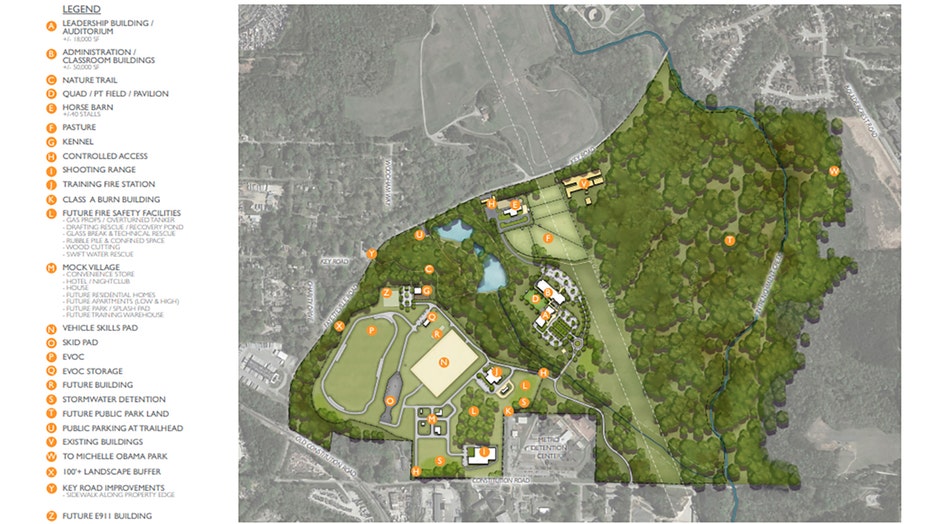 A big portion of the controversy stems from a non-binding resolution passed by the Atlanta City Council in 2017. With the "City Design Plan," the city was hoping the area would be preserved as greenspace and become part of a greater effort to renew the South River Forest Basin.

The Atlanta Police Foundation argues that only 22% of the site will be used and the remaining land can be opened as a public park. A map on the foundation’s website shows the areas around Intrenchment Creek, a tributary and nearby lakes surrounded by greenspace. The design even includes natural trails amid the training facility campus and would like to the link to Michelle Obama Park on the east side.

The current plans show the training campus to the west of high-tension power lines that cut through the property. The remaining property to the east would remain untouched, including the remains of the old prison farm facilities along Key Road.

After five years of the plan being shown to various local civic organizations and undergoing several dozen changes to the plan, it was finally presented to the city council in early 2021. Atlanta Mayor Keisha Lance Bottoms would create a site committee to study the plans.

Those plans include leasing the land to the Atlanta Police Foundation for 30 operational years on top of the time needed for development and construction of the site. The foundation would need to raise $60 million to pay for two-thirds of the construction cost. The city would then pitch in about $1 million a year for 30 years for maintenance and operational costs.

During the planning stage, a Community Stakeholders Advisory Committee was created comprised of leaders from the 13 surrounding neighborhoods. The committee stipulated that all environmental laws be followed and the final construction needed to be LEED-certified. In addition, the foundation pledged to plant 100 new trees.

The foundation also counters environmentalists’ claims that the site would impact "old growth forest." With the site having been clear-cut several times in the last century, a foundation study found fewer than 20 specimen trees.

A year before the Atlanta City Council would see the initial plans for the Atlanta Public Safety Training Center, a series of officer-involved shooting deaths in 2020 would give many pause to the use of force by police officers. Names like George Floyd, Breonna Taylor, and Rayshard Brooks would be spoken across the country, would spark a rebirth in the Black Lives Matter movement, and for many, would start a wildfire of debate over current policing policies.

Some of the anger was directed towards the new proposed training facility in Atlanta. Some claim such a real-world facility would only serve to increase the aggression, militarization, and overreach of law enforcement officers.

The Atlanta Police Foundation counters those claims writing on their site:

"Just the opposite: Atlanta will finally have training facilities worthy and appropriate to training a 21st Century police force. Our conception is for a training center that is publicly accessible and designed to encourage police/citizen interaction to engender trust within our community."

Five people are facing domestic terrorism charges due to accusations about their method of protest along a planned site for what critics call 'Cop City'. Both sides claim the other is using violent tactics.

The foundation says during a series of meetings between the Atlanta police chief and the various NPUs in the city conducted in August 2022, Black communities were just as vocal about a more visible and well-training police force to combat crime.

"Contrary to the complaints of a small group of people who want to ‘defund the police,’ citizens see police presence as a protection against crime, and as sentinels for public safety," the foundation wrote on its website.

Some argue the training facility is more than twice the size of the NYPD facility in Queens or the training center for Chicago police, both which are less than 35 acres. The foundation counters that Charlotte, Milwaukee and Las Vegas all have larger facilities than Atlanta proposed one. They add that each of those facilities are 1.5 to 6 times more expensive.

The training facility plan was approved by the Atlanta City Council in October 2021 in an 11-4 vote.