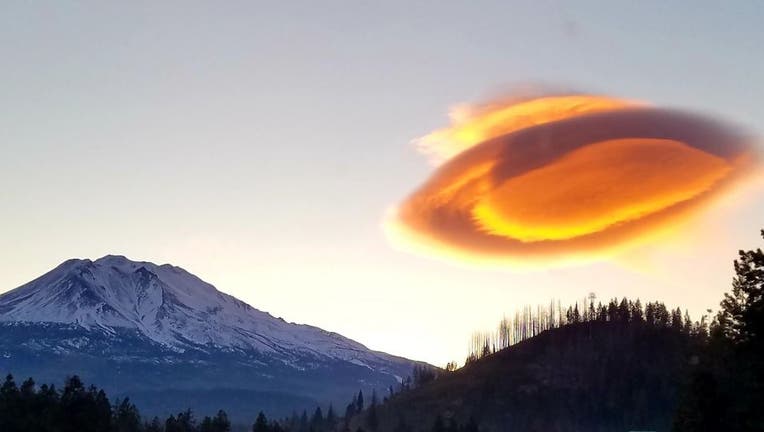 The U.S. Forest Service posted the photo on its Shasta-Trinity National Forest Facebook page, saying that it was nothing more than an unusual weather formation known as a lenticular cloud. (Shasta McCloud Management Unit Fire Management Officer Paul Zerr)

FOX NEWS - Are human beings alone in the universe? It's the question of a lifetime and no one has really been able to answer whether another intelligent life exists.

Aliens have been so present in pop culture over the years, that they make us believe. Which, perhaps, is why residents of Siskiyou County, Calif., wanted to believe a lenticular cloud hovering near Mt. Shasta on February 12 was an unidentified flying object.

Police officer Paul Zerr, the Shasta-McCloud Management Unit Fire Management Officer, took the photo of the supposed "UFO" cloud at around 7 a.m. PST on Feb. 12. It was captured just north of Exit 747 on the southbound side of the Cascade Wonderland Highway near Weed, [Calif.] Store, a souvenir shop that bears the name of the town.

The U.S. Forest Service posted the photo on its Shasta-Trinity National Forest Facebook page, saying that it was nothing more than an unusual weather formation known as a lenticular cloud.

Lenticular clouds — also known as Altocumulus Standing Lenticular — are stationary clouds that are shaped like a lens and normally develop on the downwind side of a mountain or mountain range. They get their odd shape from moisture in the air and are most common during the winter months.

When there is sufficient moisture present above the top level of the mountain, the clouds develop within the crest of the mountain waves where the air is rising.

Mount Shasta, a 14,180-foot-high potentially-active stratovolcano, is one of the places to spot them in the state, said the Shasta-Trinity National Forest Service.

Forecasters said the clouds are most often seen in the winter or spring when winds aloft are typically the strongest.

Because of their saucer-like shape, the clouds are frequently mistaken for UFOs —  especially by people who spend much of their time searching for UFOs.

Much like the famed Roswell, N.M., Mount Shasta has become an attraction for extraterrestrial-life enthusiasts and conspiracy theorists. The nearby town of McCloud will be hosting a "Meet the Venusians — We Are in Contact" conference later this year.

"There’s that Flying Saucer again," one person quipped on Facebook.

"It's the Enterprise," one person wrote, "I knew they were space ships this just proves it."