Chicago cops seen ‘lounging’ during looting were asked to be in Congressman Rush’s office, FOP and sources say

The leader of the Chicago police union -- and sources -- are sharing a different side of the story with FOX 32. They claim the officers were told they could be in Congressman Rush's office.

CHICAGO - More than a dozen Chicago police officers and supervisors were captured on video “lounging” inside a burglarized congressional campaign office and even appeared to be making popcorn and brewing coffee as people vandalized and stole from nearby businesses as protests and unrest spread across the city, a visibly angry Mayor Lori Lightfoot said Thursday.

U.S. Rep. Bobby Rush, a Democrat whose district includes much of the city’s South Side and southern suburbs, said his staff first viewed the video and he brought it to Lightfoot on Wednesday.

The footage was taken on May 31 and early June 1, as police received widespread reports of vandalism, theft and arson in neighborhoods on the city’s South and West sides, officials said. Chicago, like other U.S. cities, saw large protests overshadowed by criminal activity in the days following George Floyd’s death in custody after a white Minneapolis police officer pressed his knee into the black man’s neck for several minutes.

Lightfoot, who described herself as “angry” and “disgusted” by the actions shown on video, said the department’s Internal Affairs division and the Civilian Office of Police Accountability are investigating.

Lightfoot, who showed the media screen grabs from video footage that has not yet been made public, said the officers shown have not yet been identified. Police from around the city were dispatched to the South and West sides in response to unrest during the last weekend in May, making that task more challenging.

Images shown to reporters during a press conference included one officer lying on his back on a couch in Rush’s office. Others are shown resting their heads on desktops or seated with protective helmets beside them as they look at cellphones.

Rush said the officers appeared to be relaxing inside the office that was broken into earlier in the day, still sounding like he could not believe what unfolded on the video.

“They even had the unmitigated gall to make coffee for themselves and to pop popcorn, my popcorn, in my microwave while looters were tearing apart businesses,” he said. “Within their sight and within their reach.”

Lightfoot said investigators will use department records and location data from department vehicles to identify the officers involved. She noted that at least three of the employees on the video wore white shirts, denoting leadership roles.

“While thousands of officers served honorably on that very difficult weekend and every day since, these individuals did indeed abandon their responsibilities and their obligation and their oath to serve and protect,” she said. “We should all be disgusted. We should all feel hurt and betrayed in this moment of all moments.”

Top leaders of the city’s police department called the officers’ actions indefensible, and Superintendent David Brown pledged that they will be disciplined because the department’s integrity is at stake.

“Sleep during a riot?” he asked, incredulously. “What do you do on a regular shift when there’s no riots?"

First Deputy Superintendent Anthony Riccio said he was stunned by what he saw, particularly when he realized what was going on outside as rioters were attacking officers, looting stores and setting squad cars on fire.

“Thirteen officers making popcorn, taking a nap and relaxing as I was standing shoulder to shoulder with hundreds of other officers on State Street while we got pelted with rocks,” he said, reminding reporters that more than 100 officers were injured during the rioting. “That’s occurring at the same time these guys are making popcorn and having a pot of coffee.”

However, the leader of the Chicago police union -- and sources -- are sharing a different side of the story with FOX 32. They claim the officers were told they could be in Congressman Rush's office.

Fraternal Order of Police President John Catanzara says he was told those officers were at the office to protect and defend it.

“If there’s nobody there, what are they supposed to do? Stand in a skirmish line in the middle of the night for five hours with nobody there? Makes no sense. If their job was to protect the premise from being futher looted, I mean yeah, it looks bad, but again, it’s not the end of the world like they’re trying to make it and turn it into some kind of racial event,” Catanzara told FOX 32. 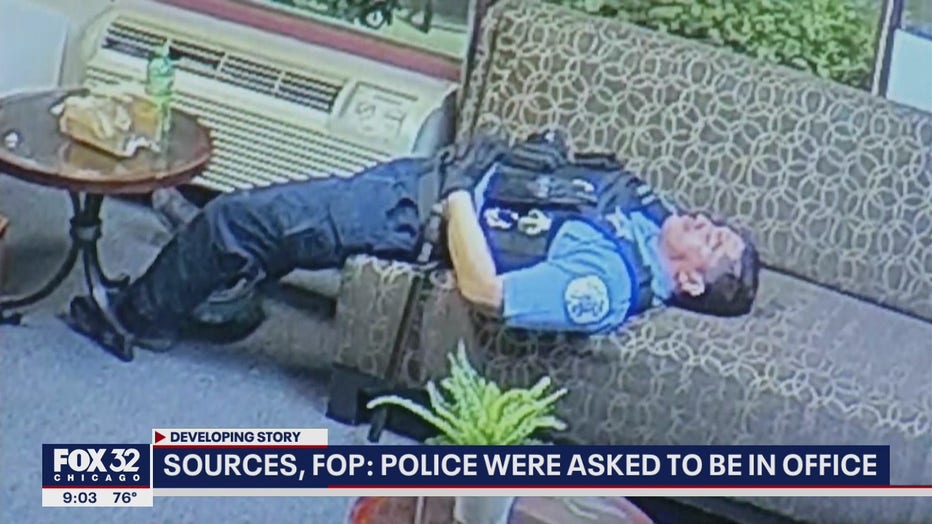 FOX 32 reached out to Congressman Rush's office for a response to those claims. The campaign office says they did not personally alert police to come to the office. A spokesperson said in part that the alarm system service was alerted that the office had been broken into and it then alerted the local authorities.

Lightfoot did not say what actions should be taken against the officers. A few days ago, she said she wanted an officer who made an obscene gesture to protesters fired.

“Not one of these officers will be allowed to hide behind the badge and go on and act like nothing ever happened,” she said, adding later in the news conference, “I believe we should take the strongest possible action that we can take, particularly with the supervisors.”

She also suggested that the scene that unfolded in that office suggest the officers believe they can do whatever they want.

“These officers clearly felt like they were untouchable,” she said. “And why not when the officers, the white shirts (supervisors wear white shirts to distinguish them from other officers) are in the room with them?”

She said the question of whether the officers should face criminal charges is being “scrutinized” by the Cook County State’s Attorney’s and U.S. Attorney’s offices.

The mayor is also pushing for the state of Illinois to pass a law requiring officers to be licensed.