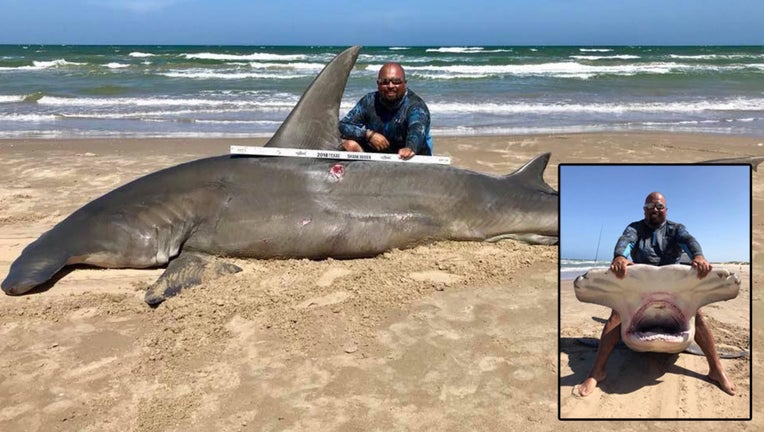 A man is calling the 14-foot hammerhead shark he reeled in off of the South Texas coast a "catch of multiple lifetimes".

According to a Facebook post by South Texas Fishing Association, Poco Cedillo caught the hammerhead shark on the Padre Island National Seashore. He wrote in the post that it took him an hour and a half to reel in the shark.

In the post, Cedillo wrote they noticed the shark was tired so they quickly took the pictures, measured her, took the hook out and tried to get her released.

"At the time we didn't bother getting a girth, fork length or even tried tagging her. Our main focus was to get her released quickly," Cedillo wrote. "Well after 30-40 min of us holding her up into the current in 3-4' of water we were faced with accepting the fact that she was done. We were so tired, shark rashed and disappointed that it sucked the excitement right out of us for a while."

Cedillo wrote that after realizing they couldn't get the shark released, they decided to do everything they could to save and donate the meat.

"People that know me know that I release every single shark I catch so this hurts," Cedillo wrote. "Catching this fish of a lifetime and it not making it totally sucks for me but it happens especially since we tried hard."

According to the post, the official measurements were 14 feet, 135" fork length, and 78" girth.