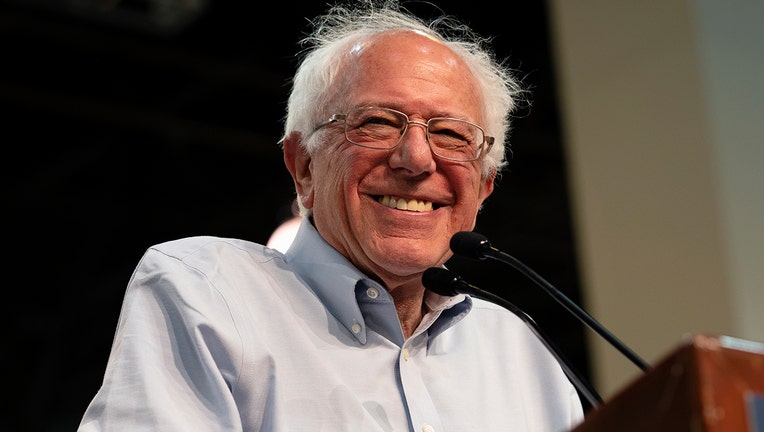 FILE: Presidential hopeful Bernie Sanders smiles while speaking at a campaign rally. During an interview with Joe Rogan, Sanders promised to tell all about aliens if elected. (Ronen Tivony/SOPA Images/LightRocket)

LAS VEGAS - The Nevada caucuses are underway as Sen. Bernie Sanders takes an early lead -- and state Democrats are cautiously hopeful they will avoid the chaos that hit Iowa’s caucuses earlier this month.

Early votes coming into the Fox News Decision Desk suggest the Vermont Democratic socialist is off to a strong start in the nation's third contest in the Democratic presidential primary, but it was too early to project whether he will win.

The closely-watched process began at noon local time, with Nevada Democrats optimistic that they will avoid a repeat of the technical glitches that plagued the caucuses in Iowa. Those fears led the state Democratic Party to decide to rely on traditional reporting by phone, rather than an app made by the same developer that created the app blamed for the debacle in Iowa. It has also scrapped a plan to use a Google Forms app loaded onto iPads.

"Nevada Democrats have learned important lessons from Iowa, and we're confident they're implementing these best practices into their preparations,” said Xochitl Hinojosa, a Democratic National Committee (DNC) spokeswoman. “We've deployed staff to help them across the board, from technical assistance to volunteer recruitment."

DNC Chairman Tom Perez told Fox News on Saturday that the party is in "great shape" ahead of the caucuses: "We have all of the early vote results distributed to the caucus sites. People are checking now…. I think it’s going to be a really exciting day."

For the first time, Nevada held early voting, from last Saturday through Tuesday. Roughly 75,000 people cast ballots, which was nearly as many people who took part in the state's entire 2016 Democratic caucuses. But since this is a caucus, the ballot was far from simple. Voters were given ballots to rank their choice of candidates. The early-voting ballots will be married with those of caucus-goers on Saturday – in both the first round and the realignment.

Perez indicated that the early voting was providing a challenge, but said that it was a "good problem" to have.

"The overwhelming early vote was a wonderful thing for our democracy. It made the processing a little more challenging. That’s a good problem for us to have," he said. "And that’s why nobody on the Nevada party team or the DNC team, none of us got a lot of sleep the last few nights, but that’s fine."

Asked if there will be results by the end of Saturday, he said: "That's our goal."

Shortly after the caucuses got underway, the state Democratic Party pushed back against early reports of party volunteers not showing up to administer caucuses at a number of sites, meaning they were being replaced by campaign precinct captains as site leads or site chairs. Sources in one campaign said the developments were "huge red flags" and that a number of sites do not have their early voter data needed to calculate the first alignment.

"To correct the record, there is no volunteer shortage in NV. We have an average of eight volunteers per caucus site, so roughly 2000+ across the state. Also, it's common for campaign volunteers to help with running precincts on Caucus Day," Nevada Democratic Party spokesperson Molly Forgey said. "This happened here in both 2016 and 2008."

Should the state party avoid the pitfalls before them, the caucuses could prove a pivotal moment for a number of campaigns as they seek to prove that they can attract support for a more diverse electorate in the state -- where there is a significantly higher Latino population than in Iowa and New Hampshire.

Nevada’s population, which is closer to that of the country as a whole than the more white Iowa and New Hampshire, is 29 percent Latino, 10 percent black and 9 percent Asian American and Pacific Islander.

“Look, this campaign is really just getting started. We’re finally in a place where there are folks who represent the country, who look like the country. There are good folks in Iowa and New Hampshire, but this looks like America,” former Vice President Joe Biden, who struggled in both previous states, said Friday.

The candidate eyed in polls as the favorite to take the state is Sanders -- who essentially tied former South Bend, Ind., Mayor Pete Buttigieg in Iowa and won the New Hampshire primary. While it’s difficult to poll in the Silver State, an average of the most recent surveys in the Democratic caucus suggests the democratic socialist holds a double-digit lead over his closest competitors.

If that’s the case, it would mean that the race for the other candidates would be for second place. An average of the polls gives former Biden a slight edge over Buttigieg. Sen. Elizabeth Warren, D-Mass., is predicted by the poll average to come in fourth.

A Biden second-place finish would likely re-energize his struggling campaign, which was seen disappointing fourth- and fifth-place finishes in the first two states. It would help his campaign promote the idea of Biden as the centrist candidate who can beat the hard-left Sanders -- and also President Trump in the eventual general election.

However, he is seeing competition for that moderate mantle from Buttigieg, Sen. Amy Klobuchar, D-Minn., and also billionaire Mike Bloomberg -- who is not on the ballot in the caucuses, but is creeping up the polls nationally. Buttigieg, who came a close second in New Hampshire, sounded confident Friday as he spoke to supporters in northeastern Las Vegas.

“I think we’re going to have a lot to celebrate tomorrow,” he said, speaking to supporters at a campaign field office in northeastern Las Vegas. “I think tomorrow’s going to be a fantastic day.”

In 2016, eventual Democratic nominee Hillary Clinton edged out Sanders in the Nevada caucuses – thanks in part to her strong support among the state’s Latino and African-American voters.