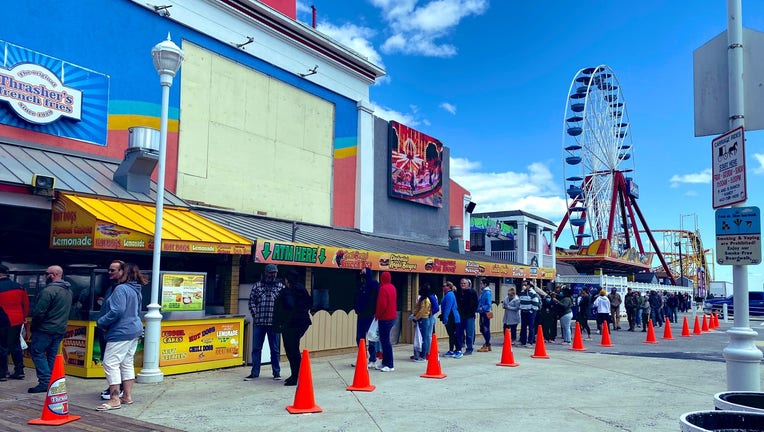 OCEAN CITY, Md. - With most stores still closed and restaurant dining rooms off-limits, the mayor of Ocean City re-opened the beach, boardwalk and Inlet Saturday after they had been closed for more than a month.

Even with the sunny skies, cold temps didn't make Saturday feel like a beach day.

But for some beachgoers, the reopening represented a glimmer of hope that life is slowly returning back to normal during the coronavirus outbreak.

Even with some restrictions loosened, there are signs in Ocean City pointing to the fact that it might be a while before everyone can openly and freely enjoy what Mother Nature has to offer.

Earlier this week, Ocean City Mayor Rick Meehan was only allowing beach access to the locals, but then decided that Saturday he would open it up to out-of-towners as well.

Donna Ward, another visitor, said while she absolutely loves getting to spend time with her granddaughter and eating pizza on the boardwalk, the safety of their health remains a concern.

“I do think it was just a little too early for me to feel safe," Ward said.

Dozens of visitors flocked to the boardwalk and on to the sand without masks, but Ocean City police continued to patrol for crowds larger than 10 and those not social distancing.

With the cold wind not showing any mercy, many people thought it was worth standing in line to get their hands on some warm boardwalk fries.

“It’s been a while since I had them and when you put the apple cider vinegar on them? Oh my god!” Bry'an Brown, of Salisbury, said.

Meanwhile, neighboring Delaware remains closed. However some businesses, like in Bethany Beach, are open including carry-out.

As far as what’s next for Ocean City and its slow reopening? That remains to be seen.

“I think restaurants will probably be required to operate much differently than they have in the past, "Ocean City Councilman Matt James said. "First (they should) open up their outdoor dining and distance the tables.”

Until then —beach visitors are trying to stay optimistic.