Bay Bridge work not taking a break during Thanksgiving

ANNAPOLIS, Md. (FOX 5 DC) - Traffic is expected to be worse than usual around the Chesapeake Bay Bridge next week.

That’s because work in the right lane on the westbound span will not be taking a Thanksgiving holiday break, not even at the busiest travel times.

The work is part of a $27 million Bay Bridge rehabilitation project which is replacing the bridge deck surface in the far right lane of the westbound span because it has reached the end of its service life and has become progressively worse.

When the project first started in September, it led to major delays and calls to reassess the project.

But state officials said they had to move forward, so they began seven days a week, around the clock work in order to speed up progress, adding that they are too far along to stop for the holiday.

“We have to close the right lane permanently because we have it milled up,” explained James Ports, executive director with the Maryland Transportation Authority. “We did some mechanical milling and we also did some hydro blasting of that surface so we are down to rebar, so we won’t be able to allow anyone to drive on that but then again we won’t be closing the second lane.”

Motorists should expect major delays in both directions and plan to leave an extra 20 to 30 minutes early if crossing the bridge.

The westbound span may be fully closed from 9 PM each night to 5 AM during the entire week of Thanksgiving. 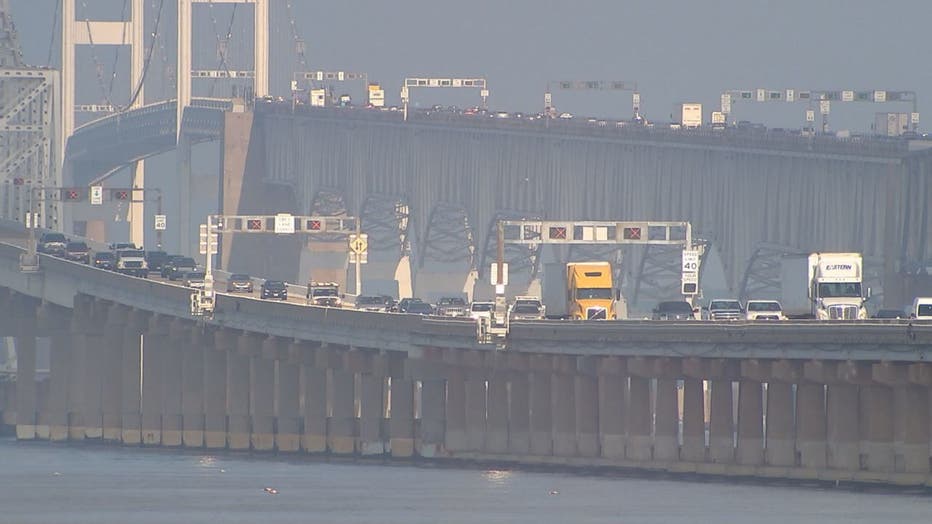 Volumes are expected to build as early as Nov. 26.

From Nov. 27 through Nov. 28 traffic will be the heaviest traveling eastbound.

Thanksgiving Day through Dec. 3 is expected to be the heaviest for westbound traffic.

Some drivers FOX 5 spoke with on Friday said they want to see these improvements happen even if it has to be done during Thanksgiving while others said that the busy holiday isn’t the time for it.

“I am not happy,” said Sara Davis. “We have a house down here and I come every weekend and fight the bridge traffic. I don’t know how people who live and commute do it, it’s ridiculous. School buses can’t even get to school on time. I can’t understand why they are doing it this way.”

“I mean if we don’t get it done through the Thanksgiving holiday then how long is it going to take?” said Kyle Cantner. “Because then we would be dealing with it during Christmas so I mean if we can get it done as soon as possible then it’s all ok.”

Officials with MDTA said that allowing the contractor to work during the holiday period will shave weeks off the project duration, especially if the weather cooperates.

“We have it 99 percent hand milled and we have it 99 percent hydro milled,” said Ports. “So, all the milling operations are completed now except for the very little hand chipping that we need to do. We just hit the fifty percent mark for laying the concrete so we are way ahead of schedule right now.”